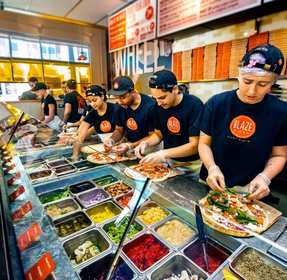 The restaurant, which will feature a 2,500 square foot interior with seating for 50, will open in the heart of Toronto’s Dundas Square, Blaze said in a news release.

The chain has been known for its custom-built artisanal pizzas, freshly made salads, blood orange lemonade and s’more pies since opening its first location in Irvine, Calif., in 2012. Each restaurant features an interactive open-kitchen format that allows guests to customize one of the menu’s signature pizzas or create their own, choosing from a wide selection of carefully sourced ingredients. The personal pizzas are sent to an open-flame oven and baked in just 180 seconds.

The company says staff will use Canadian flour to make its own dough from scratch. It also will offer gluten-free dough and vegan cheese options.

Architect Ana Henton has added several localized elements, including an oversized wall graphic featuring the Toronto skyline, which will be custom built to suit the space. The restaurant will use both recycled and sustainable materials and energy-efficient LED lighting, and will feature eco-friendly and compostable packaging.

“We’re thrilled to be bringing Blaze Pizza to Canada, and couldn’t ask for a better place to begin than the food-forward city of Toronto” said Jim Mizes, president and chief operating officer of Blaze Pizza, in the release.

The restaurant will promote a turn-key fundraiser program that returns 20 per cent of event proceeds back to local organizations, helping schools, sports clubs and other local groups “cause a scene for a good cause.”