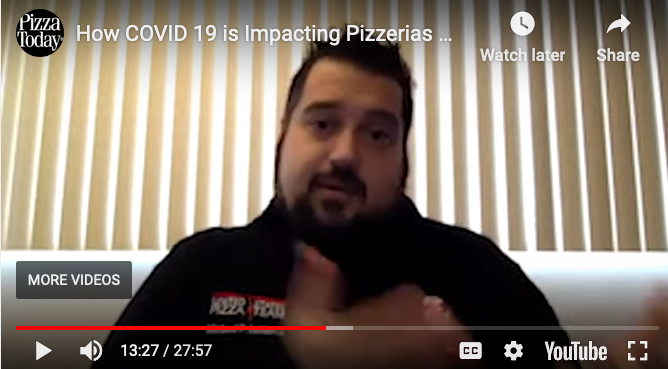 Tony, who owns several different concepts in California and Las Vegas, said impact differs from location to location. For example, sales at the full-service place are down 70 per cent but sales at his slice house are not down just a bit. Sales at his location in the capital of Sacramento are way down as the government centre is a “ghost town.”

Mike is in Ohio, where there have been very strong moves by government – schools cancelled immediately, dining rooms closed quickly, and now there is an order to shelter in place. His stores are primarily pickup and delivery and sales are down by 10-12 per cent. He has not had to lay anyone off. He has reduced hours so that they open later and close earlier.

Nick, in Pittsburgh, estimates he’s lost about 35 per cent of sales. He’s had to lay off employees – they are down from about 200 to 130 people and taking things day by day.

“A lot of us have been doing pizza kits to make pizza at home,” Tony says. “They’re allowing us to sell alcohol to go. We’re allowed to do cocktails – so we’ve made it a challenge. I sold 100 in three days – these are $12 cocktails. If you’re able to do it, booze sells. Nobody cares if it’s in a fancy glass.”

“We can sell beer to go but not hard liquor,” Nick adds. “We normally sell growlers for about $25-30. I’ve got these kegs sitting around, the ones that are tapped are going to be garbage if not used. We’ve come down to $19 sold with a glass. We’ve been selling a ton of those. Also, we have a licence to deliver beer. We can sell growlers up to three at a time. It’s better than nothing and we can put another person on to pour the growlers. It wasn’t just moving the kegs, it was giving some people their hours back.”

Nick: “We have so many great friends in this industry, this is the time to be reaching out to them. Sometimes it’s just letting people know you’re open too.”

Tony: “Any kind of content that can help other operators is important. Borrow or steal ideas – you don’t need to ask permission. We’re here to help and we need help too.” #pizzastrong