Time for a living wage? 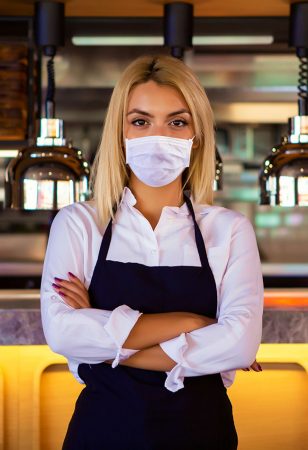 Tipping means “attach to or cover the end or extremity of.” The dictionary also suggests checking out the definition of “gratuity,” which according to Merriam-Webster is this: “something given voluntarily or beyond obligation usually for some service.” Combine these two definitions and you can empirically define the act of tipping as something extra that’s not required.

The definition may position tipping as an act of generosity, but it hides the more sinister origins of its practice – tipping is about the use and abuse of power.

Tipping’s connection to slavery
When an employee donates their paid and unpaid time off back to their employer out of fear of reprisal or job loss, it’s called wage theft. When an employee is forced to work for free and is considered property, it’s called slavery. Either way, the business becomes more profitable at the expense of the workers. After the U.S. Civil War, slaves were emancipated and entered the hospitality industry for work. These positions were often unpaid, and patrons would provide their income through gratuities for good service. To be able to earn money, workers had to continue to bow, scrape and capitulate. Money is power.

Government policy enables tipping
Governments have long been complicit in the practice of tipping by setting special minimum wages for some jobs that are assumed to have a significant part of the income paid by tips. Many provincial governments still allow businesses to pay workers who are tipped a lower hourly wage than non-tipped employees. Tips are considered income which is to be declared on tax returns and for which the employee will then remit the appropriate income tax based on their total earnings. As reported by the Chartered Professional Accountants of Canada, CRA (Canada Revenue Agency) audited four restaurants in the Niagara Ontario Region in 2012, and found that of the 145 servers audited, there was $1.7 million in undeclared income equaling about $12,000 per server. The comment in the report stated: “The amount of unreported income was very surprising.”

When this pandemic is over, memories will be short, the federal deficit will be sky-high and CRA will be looking to the underground economy for extra tax money. Digital payments have skyrocketed with a bonus to the bean counters: it’s never been easier to audit a restaurant and to tally the tipping income. Your servers could be handed a big back-tax bill, which will be stressful for them and for your business.

Tips and taxes
There’s another term for not declaring income: tax evasion. Taxes go towards social programs, including health care and wage subsidy in times of trouble. The restaurant business model requires the two things most dangerous in this pandemic, which are gathering in a group and not wearing a mask. It’s been a brutal year for many operators and help is needed. CERB payments to employees, subsidies and business grants are financed by taxpayer dollars. Some taxpayers may say, “If you don’t pay your fair share of taxes, why should you benefit from the cushion?” As public sentiment becomes more focused on controlling the deficit and Canadians are more politically motivated to vote with their wallets, we will likely see restaurants that pay their employees a living wage become a preferred dining location.

Tips and team dynamics
Many restaurant managers spend hours on scheduling, and it becomes more difficult when tips differ by day part and staff are vying for the best time slot. The Thursday night crowd is prime time – the Sunday brunch crowd, not so much. Scheduling based on the needs of the business and not on the flow of gratuities makes sense and takes much less time. Your back-of-house team is probably making a fraction of what the front-of-house team makes and is working just as hard. This sets the stage for inequality, frustration and conflict. If you get involved and attempt to direct the allocation of gratuities in any way, CRA may view this as an indirect tipping system, which means the tip is not going directly from the customer to the server. If the restaurant collects the money and disperses it later or directs its dispersion, then the income is considered a wage not a tip. Wages are subject to employment insurance and CPP deductions by both the employer and employee. There are ways to play a bit of a shell game to get the money directly to the employees, but it’s still not solving the bigger problem around gratuities and their destructive impact.

Tipping and power
If tipping born of slavery has been a way of withholding income to control the person in the less powerful position, then not much has changed. The COVID-19 pandemic has brought out the best, and the worst, in people. A U.S. report by One Fair Wage surveyed 1,675 service workers in states. The researchers found that 65 per cent of workers reported their tips being docked if they asked customers to follow stated health protocols. Forty-three per cent of female workers had experienced a rise in sexual comments with one woman reporting,“(A male) customer asked me to take my mask off so they could see my face and decide how much to tip me.”

Advantages of living wage
Eliminating tips will have little impact on the customer. The total bill will be virtually the same. You will need to pay a living wage and the server will need to pay income tax. There will be efficiencies gained in having one payment system for all employees and peace of mind in not worrying about a CRA audit. You will have more equality amongst team members and your staff will have a stable income and be able to apply for loans and mortgages by having evidence of income.

How to implement it
We asked Chef Adam Hynam-Smith and Tamara Jensen, proprietors of Dispatch, in St. Catharines, Ont., for advice on implementing a no-tipping operation. Dispatch has paid employees a living wage since its inception in 2019. “The biggest hurdle for existing restaurants to transition to a no-tipping model will be to ensure existing staff are comfortable with whatever compensation structure is replacing it,” Hynam-Smith says. He points out that labour, menu design, restaurant capacity, staff experience and target audiences all need to be factored in.

For operators worried that service levels will falter without the enticement of a tip, Uber did research comparing the tip amount to the service ratings on their app platform and found no correlation.

Hynam-Smith says: “Customers benefit from the elimination of tipping because the restaurant is working as a team to provide the best overall experience possible. The argument in favour of tipping is often that customers don’t want to pay more for poor service. Our response to that is a) you shouldn’t be receiving poor service in a professional hospitality setting, and b) if a team member is being compensated fairly and feels invested in the sustainability of the business, they are more likely to deliver exceptional service.”

The proprietors of Dispatch have the following advice
Educate yourself on the history of tipping to learn about why and how it fosters inequity in the workplace. Ask yourself if there is anything you can be doing to create a more equitable work environment and how that might affect the sustainability and success of your business. Speak to your team members and facilitate an open dialogue about the topic so that tipped and non-tipped employees have an opportunity to share their perspectives. Look to your colleagues around the world who operate establishments that are similar to your concept to see how they have designed their menus, managed capacities and structured their teams without relying on a tipped minimum wage.

People should know what they’re going to earn for the work they provide without leaving it to the whims of customers. There’s never been a more poignant time to make sure that essential workers are paid fairly.

Michelle Brisebois is a marketing consultant specializing in e-commerce and digital content strategy and retail/in-store activation. Michelle has worked in the food, pharmaceutical, financial services and wine industries. She is currently an adjunct professor at the Canadian Food and Wine Institute at Niagara College and can be reached at michelle@textrixconsulting.com.