Using beer to enhance the flavour of your crust 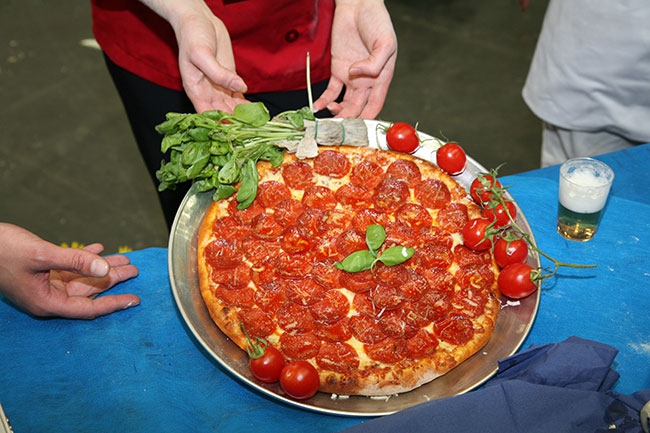 Diana’s signature beer dough helped her “Ultimate Pepperoni” win Chef of the Year and place 35th out of 427 entries in the Pizza Classica category at the World Pizza Olympic Games in Italy in 2007. Photo courtesy of Diana Cline

This month I’m going to talk about something I have a lot of experience with: using beer in a pizza dough recipe. Back in 2005, this magazine held the first competition for Chef of the Year, which was inspired by a Food Network competition show. There were 40 common ingredients and you were allowed to choose five secret ingredients to make three recipes from scratch.

I spent quite a bit of time brainstorming about the ingredients and about the competition. I wondered what made Canadian pizza essentially Canadian versus New York-style, Chicago deep dish, California-style and Italian-style. Back to my original question: what makes Canadian pizza just that? One night while looking into the fridge, it hit me. Canadians have enjoyed beer and pizza for decades. What would happen if I put the beer right into the pizza dough?

It took me three or four test batches before I was able to answer that question. I made very small test batches yielding only four dough balls, so it wasn’t like I needed a whole keg of beer to figure it out. I did a few batches, increasing the amount of beer while decreasing the amount of water by the same volume. I found that in order to impart any of the beer flavour to your pizza crust at least 50 per cent of the liquid must be beer. Using beer in your pizza dough can add a unique flavour and appeal to an otherwise ordinary pizza. The main thing to remember is to choose a beer that has a distinctive flavour. Stay away from light beers because they won’t have enough kick to enhance the flavour of the dough.

Next, I varied the fermentation, or proofing time. I always allow my pizza dough at least 24 hours to proof in a walk-in cooler: any good dough needs time to develop the flavours.  In the case of my beer dough, I found that the sweet zone was after 36 hours of fermentation.

One of the most common questions I get about using beer in a dough recipe is whether the amount of yeast must be reduced since there is yeast present in beer. The answer is no. The amount of active yeast present in the beer is typically not sufficient to warrant reducing or eliminating yeast in the dough recipe. This is only a general rule of thumb. It’s possible to make a starter, which is often substituted for fresh yeast, from a combination of beer, flour, salt and, of course, time.

Once the dough was given sufficient time to develop the flavours, I baked it up with just a little sauce and cheese. The flavour of the beer is baked right into the pizza dough and all the alcohol bakes off. Therefore, it’s safe for all ages to eat a pizza crust made using beer. In the case of our signature beer dough, the crust bakes to a crisp golden brown on the outside while still being soft and bread-like inside.

The experimentation paid of when my creation took the top prize. Since developing my award-winning beer pizza dough recipe, I’ve shared it with friends from around the world. My friends from Ireland used Guinness beer in their pizza dough one year and Jameson whiskey the next. A friend from Ohio used a craft beer that was popular at his high-end pizzeria. A friend from California tested it with a Pinot Grigio. When you have a good dough recipe, it can easily be modified to showcase regional preferences and become a signature feature of your menu.

Diana Cline is a two-time Canadian Pizza magazine Chef of the Year champion, internationally recognized gourmet pizzaiolo, partner with Diana’s Cucina & Lounge in Winnipeg and a director for the CRFA [now Restaurants Canada] from 2009-2013. In addition to creating award-winning recipes, Diana is also a consultant to other pizzeria owner/operators in menu development, creating systems to run a pizzeria on autopilot, along with marketing and positioning to help operators grow their businesses effectively and strategically. She is available for consulting on a limited basis. For more information, contact her at dianaslcline@gmail.com.
Print this page