On the foundation of a century-old Italian bread dough
recipe, Keith Toppazzini is hoping to build the next level of success
for his Ontario-based Topper’s Pizza. 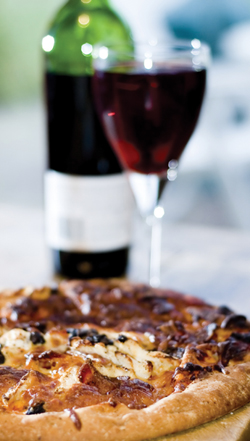 On the foundation of a century-old Italian bread dough recipe, Keith Toppazzini is hoping to build the next level of success for his Ontario-based Topper’s Pizza.

With shades of last season’s hottest big screen movie, Toppazzini hardly gave a sideways glance at the opportunity to bring together his renowned gourmet menu and some of the finest wines produced in Ontario.

At the media launch of the latest offering from the Topper’s family, the co-CEO cited a recent study in the United States, showing that one in five adults now consider themselves gourmet consumers. This has pushed the gourmet industry past the $40 billion mark in North America. Toppazzini said the growing sense of consumer sophistication, combined with people’s passion for some finer moments in their culinary experience, means the timing is right.

“We began introducing specialty pizzas to our customers several years ago, primarily in response to the demands of adults who wanted to be able to order flavourful bistro-style pizza,” he said.

According to the Wine Council of Ontario, sales of Ontario wines grew 5.4 per cent over the previous year, for a total of $394 million in overall sales. Ontario wineries purchased over 26,450 metric tonnes of grapes, and produced some 44 million litres of wine in 2004.

Topper’s, as a brand, does not offer dining room service. The company is a strictly take-out operation, and in-house analysis has shown more and more consumers are choosing to eat at home. In fact, the trend may even become more prominent in the coming months, given the speculation over fuel and energy costs, and its impact on the disposable income of the average Canadian.

“We see the trend is moving towards more in-home (dining). We see it already in other areas,” he said.

So, consequently, the question becomes, if Topper’s does not have dine-in service, nor do they serve alcohol at their stores, how does wine come into play?

Toppazzini said the strategy behind their latest brand extension is to work with both the Liquor Control Board of Ontario and the WCO to provide suggestions to consumers. The pizza company has produced an advertising program for each of the stores to help educate customers on which wine would complement one of the gourmet menu items.

“We don’t see ourselves as in the business of pizza, we see ourselves as being in the meal replacement business,” Toppazzini said. “In our research and development, we don’t think ‘pizza,’ we think flavour and experience.”

And in terms of R&D for this venture, Topper’s partnered with the wine council to find perfect matches for their selection of pizzas. In all, 11 different Ontario wineries have contributed to the wine pairings.

“When this idea came about, we continued to explore it with the wine council,” Toppazzini said. “They went back to the wineries and came up with a great selection of VQA wines.

“This kind of business entrepreneurship fits in with what we are,” said Sherri Haigh, director of public affairs for the WCO. “It’s all about food pairings, and we’re also trying to bring people back to the Ontario wines.”

Toppazzini explained that in developing the wine pairings, the goal has been to cater to the interests and tastes of a segment of their adult consumers who already consider themselves aficionados, as well as drawing a new experience to those who are interested in cultivating a taste for good wines.

But the pizza executive is also careful to point out that Topper’s, and its partners in the venture, are strong advocates of moderation and responsible drinking. Toppazzini said they have no intention of moving into the serving aspect, and that the wine pairings are suggestions to help consumers make choices.

Toppazzini has also recognized the potential of co-operative selling. Traditionally, family pizzas have been sold in pairs, with one menu for the adults, and a second for the children. Not to neglect these equally important decision-makers, Toppazzini has suggested some non-alcoholic beverage pairings might make it into the overall strategy.

Haigh pointed out that the pairings are suggestions, and that some consumers already have their personal preferences for wines.
“It’s all about personal taste, and no one’s taste is wrong.”

Haigh said the staff at the LCBO are well trained in wine knowledge, and may make other suggestions based on the kind of pairings in the Toppers program. She added, that the choices are meant to be easy solutions for consumers who may not be well versed in wine matching.

When making the pairings, Haigh said the wineries opted for moderately priced wines, all under the VQA (Vintners Quality Alliance) designation. Statistics show most Ontario consumers are choosing $10-range wines for home consumption.

The idea is to get consumers to try different wines, and move progressively towards the next level of wines, she added.

As for the changing demographic in food consumption, market research publisher Packaged Facts found that nearly one-fifth of American adults can be considered gourmet consumers, and are fuelling a $41.2 billion industry. Packaged Facts projects that the market for gourmet foods and beverages will top $62 billion by 2009.

Based on data from Simmons Market Research Bureau, the report estimates that 18.3 per cent of adults try to eat gourmet food whenever they can. And it’s getting easier to do. Several factors are making gourmet products more available, appealing and affordable, including greater involvement in gourmet on the part of mainstream food marketers, expanding retail distribution of gourmet products and a growing synergy between the natural and gourmet foods industries.

“We see an opportunity, and believe we have something (customers) will appreciate,” Toppazzini said.

To encourage consumers to buy into the wine pairings, the pizza chain is conducting a contest. Over the course of the promotion, which runs from now through to December 2005, any adult visiting a Topper’s store can fill out a ballot (one ballot/customer – no purchase necessary) and be eligible to win the Topper’s/Ontario Winery grand prize getaway:  a one-day tour of Niagara country for a group of 16 friends and family, courtesy of Niagara Airbus, along with $1,000 spending money, a mid-day Topper’s specialty pizza and wine tasting event at the prestigious Château des Charmes winery in Niagara-on-the-Lake with Topper’s founder Ron Toppazzini, Topper’s co-CEO Keith Toppazzini, as well as Paul Bosc Jr., vice-president of Château des Charmes.

As for future growth of Topper’s, Toppazzini cited the strategic advantage of locating in retail centres where an LCBO outlet was present. While only six of the current 32 pizzerias are neighbours to the liquor store, future locations may well be affected by this factor. Toppazzini said they expect another four stores to open in 2005, between 10 and 20 in 2006, with an overall business model calling for upwards of 70.

“Rapid growth is part of our business model,” he said. “We look for people who want to grow beyond one location.”

Right now, the focus for Topper’s remains steadfast on the Ontario market, primarily in the bedroom communities outside of the Greater Toronto Area. Toppazzini said their analysis has shown that the demographics of those communities best fit what his chain offers.•