The meat of the matter

Canadian pizzerias are finding new and inventive ways to jazz up the meat offerings on their menus. 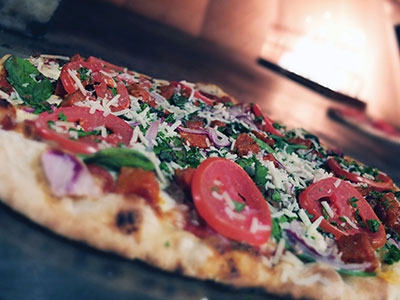 Some pizza lovers insist on pepperoni or nothing at all. But many Canadian pizzerias aim to appeal to a more adventurous customer (including the avid foodie) and are seeking new ways to perk up carnivores’ palates.

Some pizza lovers insist on pepperoni or nothing at all. But many Canadian pizzerias aim to appeal to a more adventurous customer (including the avid foodie) and are seeking new ways to perk up carnivores’ palates.

Anthony Del Balso of Montreal’s Artigiani favours pancetta, soppressata and fresh shredded sausage as toppings, and he likes to marinate his meat ingredients. One of Del Balso’s favourite marinades consists of semi-dried cherry tomatoes. Another – a mixture of caramelized peppers and onions – really brings out the flavours in his three-meat pizza, he says.

His wild boar ragout pizza, a recently featured pizza of the day, met with approval from patrons and may find its way onto the regular menu, he says. However, the item is fairly labour-intensive in that it requires three hours to cook the pork, which then needs to be shredded and dried.

NEED TO EXPERIMENT
Alfredo Mercuri, manager of Montreal’s Il Fornetto, also satisfies the urge to experiment and test the market by showcasing a pizza of the week. He likes to use salami, in particular, filomena, which is similar to prosciutto but cured differently.

“I bring out the flavour of sausage by stuffing it with fresh rapini,” Mercuri says, “which is a cousin of the turnip with broccoli-like buds and bitter-flavoured greens.”

Because his specialty is thin, baked crust, he prefers not to load up his pies with heavy toppings: the meatiest topping you will find among his 18 regular menu features is one that features capicola and pepperoni.

“I personally don’t do chicken, it’s too Americanized or Canadianized,” she says.

However, she recently branched out by offering a topping typical to Greek cuisine. “We are developing new sausages such as lamb sausages to give people a different flavour experience.”

Zuccarini serves a “brunch” pizza with a twist on the Margherita pizza. She replaces the bacon with pancetta, tops the whole thing off with an egg and finishes it in the oven.

Close on its heels is their apple pizza featuring lemon-raspberry pulled chicken. Another menu favourite, coconut-crusted chicken with coconut curry, takes chicken in a Thai direction.

Rocky Mountain’s meats are gluten-free, prepared locally and enhanced using local barbecue and tomato sauces. “We are careful not to let the sauces overpower the meat,” says Massey.

As one might expect in Western Canada, the pizzeria incorporates venison, deer and wild boar sausage on occasion, but high price points limit the use of such premium ingredients.

Like Il Fornetto’s Mercuri, Massey tries to promote even cooking by not loading the flatbread, wood-fired pizzas with heavy toppings.

PLAYING WITH MARINADES
Tony Saberwhal, owner of Magic Oven in Toronto, also likes to play with marinades that stray outside of the standard Italian flavourings.

“Our hamburger is not just seasoned with salt and pepper. We cook it with garlic and a bunch of herbs,” Saberwhal says.

“Chicken we do a couple of different ways,” he says. “We do an herb-grilled chicken as opposed to just a straight-ahead chicken.” Magic Oven also does a tandoori chicken, which they marinate with the tandoori sauce, bake or roast, and slice up for use as a pizza topping or ingredient in other dishes.

Saberwhal says they make their sausage in house. It is organic and in the form of an extremely coarse crumble.

“We tried different sausages from different sources and either they were not spicy enough or too spicy,” he says. “We’ve started to do that in-house as well. Also, some of our customers had issues with the casing: they didn’t know whether it was from pork or from beef or where it came from.”

He says customers were asking for gluten-free options. “We wanted all our toppings to be gluten-free, and that’s another reason we wanted to do it ourselves. Not half soy or half wheat.”

What is chogochujang? “It’s the new sriracha and the ketchup of Korea,” says Don Letendre, corporate chef at the Vancouver location, who adds that serving Korean-American pie in a Neapolitan pizzeria is pushing the envelope.

He is excited the chain is making its own pulled pork in house in a nod to “slow-food” cuisine. The method involves brining, applying a dry spice rub and slow-cooking pork butt overnight until the meat becomes tender, juicy and begins to fall apart. This technique and resulting flavour is what he calls an “American” twist.

“We infuse our brine at Famoso with sugar, star anise, fennel and coriander seeds,” says Letendre. “This provides a layer of flavour to the meat before we dry rub the pork. This infused brine complements the spices in the dry rub.”

Hoisin sauce is to balance the heat of the chogochujang, and Famoso infuses a base hoisin sauce with ginger, garlic, lime juice, chipotle peppers, green onions and fish sauce to add flavour and depth.

“The elements of taste for this pizza are tastes that push,” Letendre says. “Salty, sweet, and picante heighten all other tastes in this recipe.”

“We also do a shaved steak and inside round beef shaved very thinly,” says O’Dea.

Most of their meats, including sausage, are sliced thinly – bacon would be the chunkiest meat topping, she says, explaining that at 0.3 centimetres thick the restaurant’s authentic Neapolitan style pizza doesn’t hold a lot of weight.

“Our bacon is slightly different from most pizzerias. I do bacon ends, which are marinated in maple syrup, so the bacon has a kind of smoky maple taste to it.” Ends are chunks of bacon left over that can’t be used as spices. “It’s actually more like a ham than a bacon and then we chop it roughly.”

Like Massey and Zuccarini, she has added lamb to the menu. “We take a deboned lamb leg and shave it very, very thinly.”

She is considering trying her hand at comfort food with a meatloaf-style pie. “It might have ground beef or pork layered roasted vegetables in the middle and be sliced very thinly.” She saw one in Las Vegas and would like to try it out.

“When I travel, I try to look at the unique side of toppings.”

Many customers seek to satisfy that same desire for the “different.” What’s more, it may be a natural, unlearned impulse, suggests a recent NPD Group report that found 42 per cent of parents polled say their kids will eat anything.