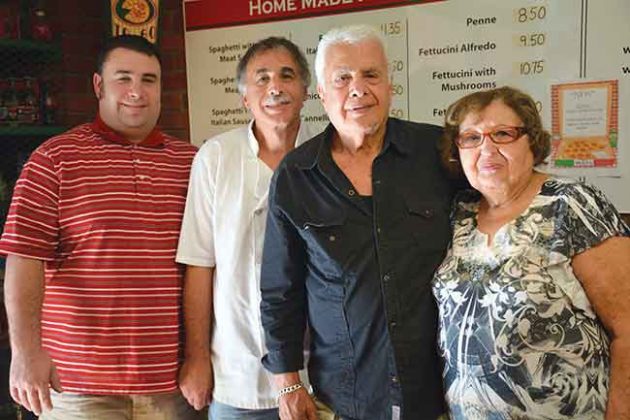 The Geraci family, founders and owners of the Aylmer, Ont., pizzeria, held a party in late August and invited the town to help them celebrate the longevity and success of their business.

Who came out for the occasion? The Geracis estimate 350 people came through their doors or mingled under a temporary tent erected in front of the pizzeria, among them longtime customers, friends and former staff. There were probably a few of the curious and uninitiated as well, although you’d be hard pressed to find those in this town of about 7,000.

Their customers are legion – and loyal – and their hometown spirit well known in these parts.

As a thank-you to their community, the family treated well-wishers to birthday cake, coffee and a slice of authentic Sicilian-style pizza not sold in the store but made specifically for the occasion.

Authentic Sicilian is one of the oldest styles of pizza and “the first fast food,” Peter’s Pizza founder Peter Geraci tells Canadian Pizza during a warm family chat in the back of the store made warmer by the radiating double-deck stone ovens. He describes it as the essence of simplicity. You rise the dough, use fresh tomato, olive oil, lots of onions, a few anchovies – don’t overdo it – and romano cheese grated roughly almost to the point of shredding. “In Italy, Sfincione!” he says with a flourish.

We are joined by Peter’s wife Francis, the couple’s son Mario and Mario’s son Matt. Mario, his wife, Nancy, and their son Matt run the shop, which they took over from Peter and Francis in 2006.

Family tradition
Peter, who originally hails from Palermo, Italy, began working in the late 1950s, and held three jobs into the early ’60s. One job was under Agostino (Gus) Bondi in his London and St. Thomas, Ont., restaurants. In 1965 he split off and started Peter’s Pizza. It is one of the few originals still in business, Peter says. Others include Vito’s Cave and Tony’s in London, Capri Pizza and Chef Bondi’s in St. Thomas.

Peter and Francis opened a location in Delhi in the late ’60s, which he ran briefly then leased to another operator after finding he had his hands full with the Aylmer location.

The Geracis have five children – Fran, Mario, Cathy, Antonia and Lily – all but one of whom worked in the restaurant as teenagers. Mario started working there when he was a young teenager and has worked there full time ever since.

Mario always knew he wanted to stay in the business of making great food. But Matt, who has worked at the family business on and off since age 15, went away to college before coming back to the business, all the while holding down two jobs. “I’ve always had two jobs,” he says with a smile. The father of three young children now works in grocery retail when he’s not at the pizzeria, which is open daily after 4 p.m.

Peter’s Pizza has always been a pick-up, take-out and delivery only shop, but in 1983 the family realized a dream when they added a dine-in restaurant next door to the pizzeria. The restaurant, which shared the kitchen and connected through awnings, did a booming business. However, they decided to close it early in 2006 as the pizzeria itself had plenty of traffic  – more than enough for Mario, Nancy and Matt to handle after Peter and Francis retired that same year.

Mario, Nancy and Matt incorporated the business and reopened in March 2006. The three run the business with the help of five outside staff, two of them part-timers.

For the Geracis, the concepts of family and business have always been inseparable. Evidence of this is an apartment above and below the pizzeria. Though unoccupied now, at one time or another most of the family took turns living in it. “There are so many memories growing up above the pizzeria,” Mario says. “Family life mingled with work life.”

Bakers first
They describe themselves as bakers. “We make our own dough,” Mario says. “We like to get that golden crust that you only get with experience.” He and Matt roll out the wooden proofing box they use and which he says works better than a metal one. “It doesn’t let the dough balls get too warm too fast,” he says.

They still have the dough roller Peter and Francis bought in the 1960s in Pico, Calif. – an Acme model.

Peter learned the pizza trade during his years working with Gus Bondi in his London and St. Thomas restaurants, but he is self-taught to a degree. “I educated myself on the levitation of dough,” he says. It wasn’t long before he went into partnership with Bondi.

‘Upside-down’ pies
Their pizza is fresh, not frozen, and made with the cheese on top. “It helps preserve the flavour of the ingredients,” Peter says.

“I would have to say our specialty pizza (our most popular one by far) is our Peter’s Deluxe, which features pepperoni, mushroom, green pepper, cheese and bacon,” Matt says. To satisfy those who like their toppings on top, they also serve “upside-down pizza.” For example, he says, usually a deluxe would be made starting with sauce, then pepperoni, mushrooms, green peppers, cheese and bacon on top. However, a customer who asks for a ‘Deluxe upside-down’ would receive a pizza made starting with sauce, then cheese, then all the other toppings would be put on top of the cheese.”

Old-fashioned service
They are decidedly and proudly old school in their approach to taking orders and working at the ovens. “We don’t use oven timers,” Matt says. “And we still like to write on the boxes instead of attaching the cash-register receipt. We have our own proprietary plates at the printer,” he adds, bringing out a box emblazoned with “Peter’s Italian Cuisine” and a boot-shaped map of Italy in red ink.

The Geracis pride themselves on customizing pizza for their regular customers. When families come in now wanting half-thick, half-thin crusts, heart-shaped crusts, and other special requests, the team always tries to accommodate. They do not offer Internet ordering, preferring to handle orders over the phone or in person. “You tell me you want a special kind of pepperoni, and I say, come in and we’ll talk about it,” Mario says.

“Aylmer is a great little town,” he adds, rhyming off several industries that once thrived there: the Carnation plant, Aylmer Canners, Imperial Tobacco.

Talking in person and on the phone helps them get to know their customers and to feel good about meeting those special requests. They cater to the people of Aylmer and the nearby police college, limiting delivery to local addresses.

“We have four generations of customers,” Peter says. “It’s nice to watch customers growing up to become pilots, doctors, judges, he adds. This prompts chuckles from the whole family as they all recount the story of a favourite customer who sold them their used Volkswagen in exchange for pizza – lots and lots and lots of pizza.

“The best form of advertising is service and product,” Peter says emphatically.

The positive word of mouth seems to have inspired extraordinary loyalty in their customers. Several former regulars come from far reaches to get a taste of home – and sometimes to take it back with them. One such customer, who used to run a company in town, likes to take three pizzas home with her to British Columbia. “They were her carry-on, before they changed the size restrictions,” Matt says.

Former residents now living in South Carolina, eager for their Peter’s fix, order pizza several times whenever they come home for a visit.

The family has faced challenges, as all businesses do.

Mario notes the pace with which things change. “It’s important to keep up with changes and trends, and pay attention to what people are asking for.” Then there are the food costs and advertising, he says. Competition is tough. “With any business, you have to work at it all the time,” he says.

It takes a lot of sacrifice to build a long-lasting business, Peter says. “You’ve got to be dead serious and responsible.”

With such a strong family work ethic, and the hands-on involvement of second and third generations, Peter’s Pizza looks set to serve its community for another 50 years.