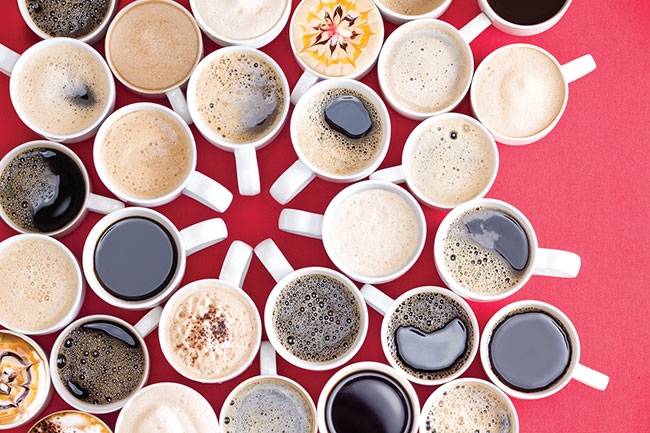 Do you own a cappuccino machine or can you froth milk for a latte? If not – you’re leaving money on the table.

Having popular beverages on your menu can help grow your bottom line.

For decades Coke was ranked the number 1 brand as reported by Interbrand’s Best Global Brands survey. Coke seemed unstoppable, and at its peak in 2014 it was valued at $81.6 billion dollars. In 2015, the company started to realize that society was starting to change its collective mind about its favourite beverages when the brand value decreased to $78 billion.That’s a pretty huge drop for one year and the slide has continued. Coke’s 2017 brand value was reported by Interbrand to be $69.7 billion and the decline appears to be well entrenched.

The foodservice industry needs to pay attention to beverage trends because beverages are one of the easiest ways to increase the average cheque – profitably. Business Insider reports that soft drinks’ markup is 1150 per cent on average. That’s pretty sweet, and sadly, so is the beverage. Therein lies the problem.

When society decided to fight childhood obesity, the messaging shifted in favour of healthier food and beverage choices. This trend is about losing the padding around our middles and, unfortunately, it’s having the same impact on the restaurant industry’s profit padding. The traditional junk food/beverage formula includes lots of good-tasting but low-cost ingredients like sugars and water. Fruit juices aren’t as profitable or as shelf stable.

Beverages still offer a great way to delight customers and to increase your average sale. But as other beverages increasingly muscle out the traditional soft drinks, having popular choices on your menu will ensure you’re well positioned to succeed.

SPARKLING WATER SALES UP
When you take the flavoured syrups and sugar out of pop, you get carbonated water. For many customers, sparkling water offers the bubbly mouthfeel of a pop without the bad ingredients. According to Business Marketing, in 2016, around 574 million gallons of sparkling water ($6.1 billion) were sold. That’s up from 263 million gallons and $2.6 billion in 2011. Popular flavours include grapefruit, lemon, strawberry and cucumber.

Functional waters that have ingredients such as mint, ginger and probiotics – considered to have health benefits – are predicted to grow by 31 per cent in total sales by 2020 according to data from research firm Euromonitor. Restaurants can literally “tap” into this trend very effectively by installing a carbonation system to take tap water and make it sparkling. If a customer orders a glass of still water, there’s no charge. However, you can charge $3.50 for a carafe of sparkling water made right in your restaurant. The equipment cost will be recovered quickly and the rest is pure profit.

PREMIUMIZATION OF COFFEE
Canadians LOVE their coffee . . . even more than they love water. According to the Coffee Association of Canada, 71 per cent of Canadians aged 18 to 79 answered yes to the question “Did you have coffee yesterday?” Only 67 per cent said yes to having had water the day before.

Much of this growth is being driven by the premiumization of coffee. If a person wants a beautifully made latte then going to an eatery to buy one is often the only course of action without buying the proper equipment for their home. Do you have a variety of artisan coffees on your menu? Do you own a cappuccino machine or can you froth milk for a latte? If not – you’re leaving money on the table. As with the sparkling water equipment, investing in specialty coffee machinery has a fast payback and huge financial upside.

Chilled coffees – a category that now includes iced coffee beverages and cold brew coffee – is now being tracked as well. The Coffee Association of Canada’s 2017 infographic indicates that eight per cent of Canadians said they had consumed one of these beverages the day before. This is a category that should continue to grow so asking your customers on Facebook if they’d like to see it added to your menu might be a great way to run a virtual focus group and build awareness before introducing it.

TEA CONSUMPTION INFLUENCED BY IMMIGRATION
Tea is another key area of your menu to develop. According to Euromonitor, sales of tea reached $1.3 billion in Canada in 2015. This represents a 23 per cent increase over 2014 sales. Immigration from tea-drinking cultures such as Asia has had an influence on Canadian consumption. Euromonitor has identified tea as a key area of opportunity, predicting that by 2020 there will be $20 billion (US dollars) in growth. They refer to tea as being “the most dynamic category in global beverages.”

The opportunity is in premium teas and herbal teas for those who are more health-focused. This category is also fertile ground for defending menu margins as premium teas can command a large markup. Put a little theatre around the presentation with fine china and tea steeping and the tableside experience will allow for a premium price.

SPARKLING WINE BUBBLES UP
The last of the millennials are now of legal age to consume alcohol, so if you are a licensed establishment having a good selection of wines, beers and spirits is smart. Wine Access released a study in January 2018 reporting that generation X consumers spend the most on wine yearly ($5,717 US) while baby boomers spend $4,900 annually. Surprisingly, millennials are already spending $4,163 US per year on wine, a figure that will, no doubt, increase as their spending power does.

Millennials are driving much of the growth around sparkling wine. Brock University’s Cool Climate Oenology and Viticulture Institute is known around the world for its wine research. Tek Thongpapanl, professor of marketing and product innovation at the school, has conducted research that confirms millennials buy sparkling wine because of the associated experience and lifestyle attributes.

“When millennials are eager to impress in a social situation, price is less of a concern and the minute they’re with others they want to impress, they will spend more,” Thongpapanl said.

Few restaurants have sparkling wine by the glass on the menu. Often, they rationalize that an opened bottle not consumed right away will go to waste because the bubbles are lost. However, with proper closures, storing and marketing tactics, featuring a sparkling wine or Prosecco by the glass is a smart move. Pair it with oysters for a glamorous appetizer.

CRAFT BEER GROWS STEADILY
Craft beer is another category growing by double digits. According to LCBO financial results for fiscal 2016-17, sales of craft beer grew 27.6 per cent over the previous fiscal year. That growth is expected to continue as innovations in flavour infusions continue to differentiate the products.

Spirits, which are consumed by 32 per cent of Canadians as reported by Statista, are another opportunity for a higher cheque average.

THE FUTURE: CANNABIS-INFUSED BEVERAGES
This segment is a wild card as the recreational cannabis sector isn’t poised to roll out for a while. Many beverage companies are working on cannabis-infused beverages and it’s fairly evident that the flavours and product profiles will be innovative. If you take the next year or two to develop a strong beer, wine and spirits menu, you’ll be better positioned to introduce cannabis-infused beverages when it’s time.

Take a close look at your beverage menu and keep tweaking it to pair with your food.  Ensure that your team knows how beverages work to complement the food and train everyone to keep a focus on recommending those pairings.

With these strategies in place; the glass will definitely be half full.