An important role in consumer issues

With healthy eating taking over the culinary mindset of
the consumer, the leading dough expert in North America feels this
should be in the forefront of every pizzaiolo’s thoughts.

An important role in consumer issues 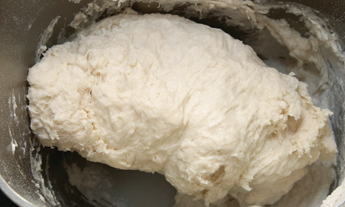 With healthy eating taking over the culinary mindset of the consumer, the leading dough expert in North America feels this should be in the forefront of every pizzaiolo’s thoughts.

“We all need to ask ‘What are they looking for?’ Consumers are looking for something they can feel good about buying,” says Tom Lehmann, aka the Dough Doctor.

“Everyone wants to eat something that makes them feel good, and some people out there are looking for something other than regular pizza dough.”

Consumer patterns in Canada are expected to show this even more over the next decade. Already a vast majority of the population is becoming detached from their own food preparation experience and seeking convenience foods. According to a report from Agriculture and Agri-Food Canada, shopping and eating habits will become more sporadic; meal-planning cycles will be shorter, snacking will replace courses as well as whole meals, and food will become even more portable.

According to the federal ministry, “the most significant health driver will be obesity, with its associated medical conditions, such as cardiovascular disease and diabetes. The move to adopt healthier lifestyles will be slow. Adults faced with serious health concerns related to their weight may be motivated to change their diet and activity patterns.”

And now, the emerging trend among Canadians has become “a generation of label-readers.”

Consumers are becoming much more interested in what is going into their food: “Foods with a function beyond just energy will be in demand, as consumers seek to manage their health and prevent disease.”

Dr. John Kelly, executive director for MaRS Landing, a program dedicated to facilitating the commercialization of innovation in the agriculture and food sectors based in Guelph, recently wrote on the subject of the Canadian consumer changing their perspective on what they choose, and why they choose it.
“No longer willing to accept the status quo, consumer reports show a growing trend towards selecting foods that are perceived as being healthier. In the future, consumers will be reaching to the food cupboard as often as the medicine cabinet to address disease. Functional foods (those which are normally consumed in the diet, but have demonstrated physiological benefit or reduce the risk of chronic disease beyond basic nutrition) will become more the norm.”

Pizza is ripe with functionality – if the industry can only educate the consumer in the same fashion as other food sectors. From lycopene in the tomato sauce, to vitamin-enriched toppings, to new dough additives such as Omega-3 boosters, pizza is no longer fitting the stereotype of “junk food.”

Lehmann was on call at the recent International Pizza Expo, delivering his message to pizza makers from around the globe that trends like those identified by the Canadian government can be met head on by the industry, much to its benefit.

“Some of the things that we’re going to see more of are whole grains, whole wheat, multigrains,” Lehmann says. He notes that a number of pasta companies are already heading in that direction, providing a broader choice of “healthy” options other than the standard durum wheat.

Current dough supplies have also migrated to these options, but Lehmann says pizzaiolos can take on the challenge themselves and make their own blends. And given most already prepare their own traditional pizza dough, and some with whole wheat offerings; it’s not a great leap to do so.

The trouble some pizzaiolos get into when making a whole wheat crust, according to Lehmann, is that the end result is “dry” or the crust “cracks.” One of the responses he has received is that it doesn’t rise as well.
“We’re not using as much water as it demands,” he says.

The difference between white flour and whole wheat flour is that whole wheat contains about 20 per cent bran – the hard outer layer of the grain. Lehmann recommends a process of “soaking” first, allowing a portion of the whole wheat flour to absorb the water before the rest of the ingredients are added to the dough-making process. In addition, holding the oils until the end of the mixing process will allow more of the water to be absorbed.

“But one thing to remember when using a whole grain or whole wheat dough, try to use it up in the same day.” Lehmann warns that the bran particles do not hold up well to age, and reduce the quality of the dough. He recommends using leftover whole wheat do to make some focaccia or grissini.

“When you start looking at ‘natural things,’ are they are better for you? We can’t say.”

But the perception among consumers is a substantial element. Other fast food sectors have caught on to the idea – McDonalds, for example, has re-branded with the introduction of deli sandwiches and salads. The perceived nutritional value is higher, but how many calories are really in the dressing that goes with the salad?

To this, one area Lehmann touched on was the use of honey in wheat dough. Sugar is used to activate the yeast, but using a naturally occurring sugar, the consumer sees this “double kick for the ‘feel good’ factor.”
“The attitude is ‘white sugar is not good for me.’ They want brown sugar, they want honey.”

It’s the perception, the “better press” that natural products have received.

However, Lehmann also sees the opportunity to remove sugar from the process altogether.

“Sugar caramelizes in the baking process, and thereby shortens the bake time required … but it does not create a crispy crust. There is more to baking than making it brown.”

Lehmann says to produce the crispiest pizza the worst thing a pizzaiolo can do is reduce the water content in the dough. The moisture is an integral part of creating the internal heated gases required for baking the pizza crust. The pie needs to be baked longer, but the physics of insulation come into play.

A dough with no sugar added should bake in a deck for about seven minutes at 525-550 F according to Lehmann. A conveyor will need temperatures of 445-460 F.

“Pizza bakes from the bottom up … it will not brown until the surface temperature reaches 350 F.”

Boyle’s Law and thermodynamics may not be a common kitchen discussion, but the reality of how gases expand when heated and the molecular structure of pizza dough relate directly to the 17th-century Irish scientist, Robert Boyle.

As Lehmann explains, a dense and heavy pizza crust, perhaps run through a sheeter, will have a compacted molecular structure. The heat will pass through the crust from below and hit the sauce and toppings. In traditional baking conditions, the dough will not cook properly.

However, a hand-tossed pizza, with an airier dough composition, has cells that hold heated gas longer, and therefore allowing the crust to bake more thoroughly. In the same process, without added sugar, the crust will hold the heat longer and allow the surface temperature of the pie to increase faster, and brown.•