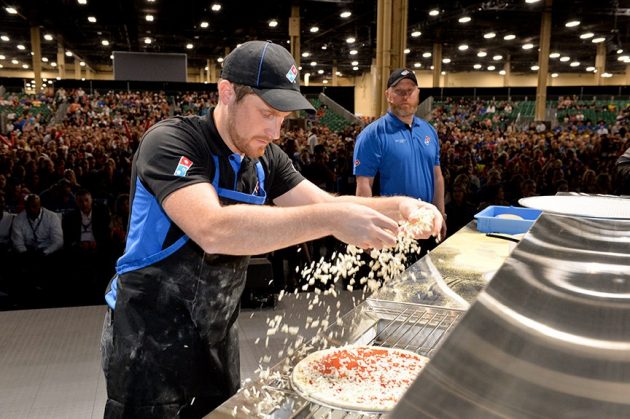 Lomker made three large pizzas in an impressive 57 seconds – that’s equal to making each pizza in roughly 19 seconds, Domino’s said in a news release. Lomker won $3,000 in prize money, a trophy and the title of World’s Fastest Pizza Maker, presented by Domino’s president and chief executive officer Patrick Doyle.

“Winning the World’s Fastest Pizza Maker competition is absolutely amazing,” said Lomker in the release. “I feel very fortunate to bring an honour like this home to Canada for the first time. It is such a blessing that I get to share this joy with my family, team members, coaches and all of team Canada. They have continuously stood by me for over a decade and provided me with unconditional encouragement and support.”

This year, participants were graded on three criteria: dough/sauce, portioning of toppings and placement. Two judges, highly qualified in Domino’s standard pizza-making practices, inspected the stretching of the dough, application of the sauce and portioning of toppings during the competition. If the pizza was not perfect, time penalties were added to the final time or the pizza was disqualified.

Lomker’s father is also a franchise owner and Lomker’s earliest memories are of time spent passing out flyers and helping his parents at special events. His first in-store experience came assisting his parents in the stores during rush hour. Lomker now owns 10 Domino’s locations in Canada.

“Winning the title this year was especially important, because my father, who is battling pancreatic cancer, was able to be there as well,” Lomker said. “While I received this award, he was inducted in the Canadian’s Chairman’s Circle, a prestigious award given to exemplary franchise owners. I’m so proud of our accomplishments and thrilled we could share in each other’s joys.”