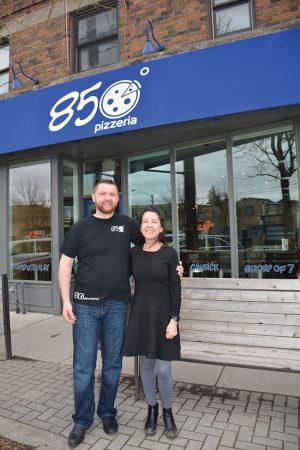 Chris Beard and his aunt, Siobhan Chambers, along with Chambers’ husband, Wayne Stasiulis, are partners in 850 Degrees, a thriving five-year-old Canada-themed pizzeria in Etobicoke, Ont.

What could be more Canadian than an Irish pizza chef making Neapolitan pizza in suburban Toronto? I defy you to find a pizzeria more Canadian than 850 Degrees, whose Canada-themed menu and carefully curated local beer and wine wall is sure to bring pizza-loving Canucks to their unapologetically patriotic feet.

You’ll find 850 Degrees on Lakeshore Boulevard in Etobicoke’s Long Branch neighbourhood. The area, not far from Lake Ontario, is off the beaten path and decidedly low key but gaining popularity as a place to live. Several new townhouse complexes are being built – a process some call gentrification – and the pizzeria, which celebrated its fifth anniversary last January, is doing its part to perk up the neighbourhood.

The 1,300-square-foot restaurant’s blond wood-panelled walls, glowing wooden floors and exposed ductwork make the place both inviting and modern. On entering, my eye is drawn to the back by two things: in the left corner, a large and very hot oven, and in the right corner, a blue wall displaying local beers and wines.

I sit down with Chris Beard and his aunt, Siobhan Chambers, who along with Chambers’ husband, Wayne Stasiulis, are partners in the growing five-year-old business.

Beard and Chambers hail from Dublin, Ireland. Chambers, who also runs a sporting goods business with Stasiulis, came to Canada first, and after culinary adventures in London, England, and Salerno, Italy,  her nephew – a friendly redhead in his mid-40s – eventually followed with his family and became a permanent resident.

Chambers – a bubbly personality whose energy fills the room – focuses on the bookkeeping and financial aspects of the business, while Beard handles recipe development and day-to-day operations.

“Cooking with local ingredients is very important to us,” Beard says. Each month they try to have two new dishes and complementary wines and beers.

Beard started making pizzas at age 16 in London, England, then at age 18 went to Salerno, Italy, to work in a friend’s pizzeria. He learned a lot in Italy, including how to bake in a two-metre by two-metre bakers’ oven. During his work as a pizzaiolo, the most memorable lesson he learned was respect for that oven, whose intense heat made an impression on him. “It was very hot, a huge oven,” he says. He also learned to appreciate ingredient quality over quantity.

This experience and training informed his work, at the Apostrophe Café in London, England, as area manager and operations director. And he carried it with him to Canada.

QUALITY OF INGREDIENTS AND SERVICE
When planning the pizzeria, the three co-owners were inspired by the apartments cropping up around them. “We thought, what can we do differently?” Beard says. They decided to make Canada their theme and to focus on a deceptively simple formula: quality of ingredients and quality of service at a fair price.

As an example of quality ingredients, he points to 850’s antipasto board, which features a Canadian salami, prosciutto, ’nduja sausage, olives, roasted vegetables, Ontario buffalo brie and focaccia bread. “It’s kind of our thing,” Beard says, and priced at $16.95, he considers it a bonus for customers. “You won’t find something of that quality deeper in the city.”

Their emphasis on local ingredients is where the quality shines and also where the value to customers is found, Beard says. The double-zero flour, tomatoes and parmesan cheese are the only non-Canadian ingredients found on their menu.

They have 16 employees – two-thirds work full time – who provide upbeat and bustling service. As with many restaurants, finding and keeping good workers is a challenge, they say,  and it doesn’t help that they are not on the subway line that serves Toronto. Seventy per cent of those given an interview are no-shows, Beard says. To find good candidates, they target students from nearby Humber College and use Indeed and Kijiji.

In summer, it’s hard to find workers. “Good pizzaiolos are the hardest to find,” Beard says matter-of-factly, adding that one to two people work the oven on a shift. Complicating the hiring process is the oven: “Our pasta is done in an oven. Some people aren’t used to baking pasta in an oven. Some have a little freak-out,” he adds with a smile.

He is talking about a gas-fired dome oven, made by EarthStone Ovens in California and customized on the outside. “It’s the Ferrari of ovens,” Beard says.

The attractive working hours – two shifts of 10:45 a.m. to 4 p.m. and 4 to 10 p.m. – have helped them keep good staff. And using a scheduling app helps staff take ownership of their time and work. If they want to trade shifts with someone else, Beard tells them to “work it out.” Soon he expects to integrate their scheduling and point-of-sale systems.

‘MASSIVE’ SENSE OF COMMUNITY
What do they like about Canada? “I like the expansiveness,” Chambers says. “I lived in England and it can be very congested.” Here it’s calmer and people are personable, she adds.

The reasonable pricing helps, he adds.

The three decided very early on they wanted to highlight local ingredients. Chambers and Stasiulis had ideas for pizza names because, having lived in Canada longer, they were more familiar with Canadian interests and themes. They brainstormed about what it means to be Canadian.

One theme that came up was hockey. 850 Degrees is not a sports bar and there are no TVs in the cozy restaurant that seats about 50 plus a small sidewalk patio. Still, a photo of NHL hockey player Dave Bolland hangs on the wall, as a nod to a personal connection between Stasiulis’ and Bolland’s fathers.

CANADA-BOOSTING MENU
Most patriotic of all is the menu, which features 16 pizzas with playful names that each tell a story of Canada. Having “bespoke” pizza names makes it more personal, Beard says.

“Lord Stanley” and “Shinny” are further tributes to hockey, and “Famous Five” celebrates the landmark 1928 case that found women were eligible to sit in the Senate of Canada.

One marked difference Beard and Chambers noticed between pizza in the U.K. and in Canada is the Eastern European pepperoni – a delicacy they enjoyed while living in England. It had a unique taste they struggle to describe but settle on as “cleaner-tasting.” They have worked hard to re-create that distinctive taste on their pizzas in Canada.

In addition to the pizzas, the carefully curated menu lists lobster ravioli, pappardelle ai funghi and a handful of main salads such as artichoke and goat’s cheese.

Chris Beard and his aunt, Siobhan Chambers, along with Chambers’ husband, Wayne Stasiulis, are partners in 850 Degrees, a thriving five-year-old Canada-themed pizzeria in Etobicoke, Ont.

LOCAL BEER AND WINE
Beard believes in serving local beverages as a way to both support local businesses and bring something unique to customers. “Usually ‘Buy Canadian’ equals expensive,” he says. He says serving Canadian wine in the past could be a high-risk venture but these days there is much more variety. “At first people didn’t know Canadian wines and beers. Now people love trying different wines and beers,” he says.

They do brewery “takeovers” three times a year and invite such vendors as Great Lakes Brewing Company, Creekside Estate Winery and Two Sisters Vineyards to showcase their beverages. Customers can try a free sample of wine or beer and have the option to buy it.

And after years of actively searching out new local products, they enjoy having companies approach them with new offerings.

INSTA-MARKETING
Instagram is Beard’s favourite social media platform. “It’s visual,” he says. “It’s the best value for advertising.” They have more than 1,500 followers.

“Social media is more valuable than word of mouth because it gives us numbers,” Beard says. “You can see the bump when you post a photo on social media. But word of mouth is more important.”

An appearance on the Food Network show You Gotta Eat Here! in 2016 is a reliable measure they are doing something right. Restaurants are featured based in part on recommendations by customers, and one of their regular customers recommended them. When the episode is rerun, they notice a rise in customer traffic.

COMMUNITY-MINDED
The partners at 850 love their neighbourhood and are quick to show it. “We’re making money, but it’s about more than that,” Chambers says.

They run pizza classes of eight for local public school and high school kids. They try to instil the benefits of local ingredients, a definition that is sometimes widened the rest of Canada.

They support local hockey teams such as The Fury and are proud of being involved in the community. Another way they show support is through Lakeshorts, an annual film festival held at Assembly Hall, a few blocks away. It’s put on by Fifth Ground Entertainment in association with Lakeshore Arts and features live music and films from all over the world. 850 Degrees helps provide food served at the festival’s Saturday night gala. And for every “Oh Canada” pizza sold, they donate a dollar to the event.

Etobicoke loves them right back. This spring they were given the Gems of Etobicoke-Lakeshore award for “Best Restaurant” based on votes from their neighbours.

Chambers also feels the pleasure of a tightly knit community on Tuesday nights when musician and family friend Paul Morgan plays guitar and sings from 6 to 9 p.m. “Customers love it,” she says. “What I like about coming in here is that eight out of 10 times, you know someone.”

Their advice for independents is to carve a niche for yourself. “You can make it really special even if you’re small,” Chambers says.