Features Profiles
Zolas for the win-win

This Ottawa-area pizza spot has picked up the Saputo Foodservice Pizza With Purpose award for its feel-good, creative collaborations 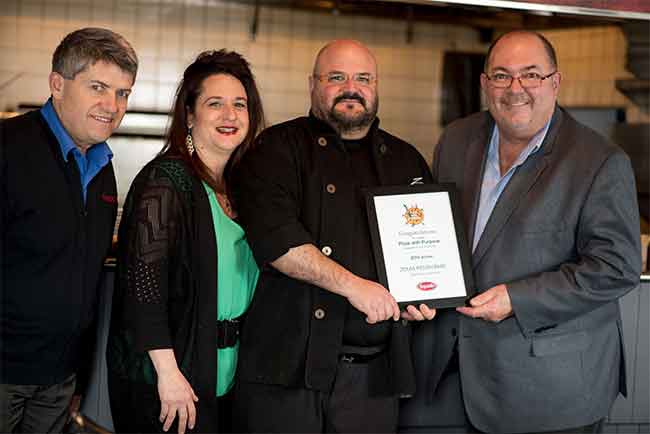 The team at Zolas Restaurant do a dizzying amount of good in their community, and they are the first to say they don’t do it alone.

Zolas picked up this year’s Pizza With Purpose award sponsored by Saputo Foodservice for their many creative and collaborative community projects.

The popular pizza and pasta spot, which is approaching its 30th year in business, clearly has a strong and valued relationship with its community and surrounding businesses. Located in Bell’s Corners, a suburb of Ottawa with a population just below 10,000, the restaurant serves a wider market that includes Ottawa and Kanata, each about 15 minutes away.

The warm, fun-loving brother and sister team of Tony and Gina Vacchio lead a team of 20 staff. Tony and Gina proudly refer to their staff as “one of the best service teams in Ottawa.” Several employees have been with the business for more than 15 years.

Owner Tony is the talented chef behind Zolas’ innovation. He has been having quite a year, first competing in the Canadian Pizza Chef of the Year competition in Toronto, then impressing judges with his charcoal-infused “Vega” pizza at the International Pizza Challenge in Las Vegas.

Zolas began life as Zolas Restaurant and Fresh Pasta Shop when Tony and a partner went into the business in 1986. He took sole ownership of the business in 1993. Tony has many years of hands-on experience, having started in the restaurant business at age 13. He worked under several inspirational mentors, including the chef for former prime minister Pierre Elliott Trudeau.

“Our family owned and operated establishment continues to grow and appreciates the practice of ‘win-win’ and partnership with our community’s objectives and goals,” she said in her entry.

That concept of win-win sums up beautifully the team’s philosophy and ambitious activities. Now hold on to your hat as we give you a taste of their recent efforts.

For the past two years, they have partnered with local groups such as Ladies Who Lunch to host donation drives for Ottawa’s homeless population and shelters, setting up a drop-off area in its parking lot for gently used clothing and new toiletry items for those in need. They put up tents, provided water and invited those who donated items into the restaurant. Inside, they rewarded donors with free live jazz, local wine and beer samples, and had a buffet set up to make it easier for all to dine if they wished. “The event was a tremendous success,” Gina said in her contest entry. “We assisted in obtaining enough items to fill four storage units.”

Last Christmas they supported and worked with local businesses and hundreds of volunteers to provide 30 families and five women’s shelters – more than 200 people in total – with hot meals, gifts for every member of the families and dry hamper goods.

The project continued until Valentine’s Day when they distributed 80 backpacks filled with gift cards, new warm outerwear and toiletries for those living on the streets.

Ladies Who Lunch is a social club Gina joined three years ago that now boasts 12,000 members. It exists to help women support other women in day-to-day life and work through referrals. But its reach is often wider. One of the group’s recent projects involved sending musical instruments, sporting goods and cards of support to the youth in Pimicikamak Cree Nation, also known as Cross Lake, Man., where youths in both areas have been taking their lives or attempting suicide at an alarming rate and leaders in both communities have declared states of emergency.

“Give us a task and we execute it,” Gina says.

In addition to helping meet essential needs, Zolas supports its artistic community by providing a setting where visual art and music can thrive.

“Artists do struggle,” Tony says, adding that they pay 30 to 50 per cent to rent space to exhibit their work. “We’ve got these walls,” he says.

Their restaurant walls provide a showcase for local and Canadian artists. As part of their art program schedule, artists showcase their work on the restaurant’s walls for one month at a time, Gina explains. “During that month we support and market them. Each artist has agreed to pay 20 per cent of all sales and those funds are then gifted to a charity of our choice.” Their current cause is a campaign called “Life of Lucas.” Zolas and another local business provide financial assistance to a family in the area to help them pay for autism therapy for four-year-old Lucas.

Over the years, they have supported organizations that focus on helping children, among them the Sunshine Foundation, Dreams Take Flight and the Max Keeping Foundation.

This focus extends to local youth as well. They are partners with their local Catholic schools, providing many students an opportunity for co-op job placements and work experience. The co-ops have been successful, with many students over the years being hired during their placements. “One of our students earned the title of youngest line cook here at Zolas,” Gina says. “She proceeded from here to Europe and is now quickly working to secure and brand herself as a five-star chef.” They also participate in classroom career and entrepreneurship programs, providing students with encouragement and objective employment direction.

Most of Zolas’ good works involve collaboration with other groups, including larger groups like the Snowy Owl AIDS Foundation, whose annual Taste for Life event Zolas has supported every year for 25 years by donating 25 per cent of their sales. The Alzheimer’s Society of Ottawa and Renfrew County is another group they support through sponsorship during its largest yearly fundraising event.

While the restaurant’s stock in trade is high-quality pizza and pasta, it has become something of a hot spot for jazz. The Ottawa area has a strong, supportive jazz community, Gina says. Six years ago they decided to provide “a landing strip” where musicians could play to appreciative local audiences. On any given night, diners can groove to the music of local jazz musicians while partaking in Zolas’ menu. When there are no musicians booked, the restaurant pipes in their recorded music through its iPad sound system. They now get requests to play from musicians from all over.

They support local sports teams, and any other organizations, in their fundraising efforts by providing gift cards toward silent auctions, promoting awareness through social media, donating fresh and frozen food hampers to those going through difficult times and free venues to those staging fundraising events.

For Tony and Gina, their activities are all about the win-win. That translates to a healthy balance, Gina says.

Their advice for independent pizzerias looking to become more involved in their community is deceptively simple. “The first thing you can do is listen,” Gina says. “Listen to ongoing conversations and concerns of those around you. Find out how you fit in.”

“It’s like a recipe: you’re an ingredient that is part of something bigger,” she says.

With low staff turnover, they have become a well-oiled machine. Each team member knows what to do when they swing into action for a cause, Gina says. They also recognize the importance of motivating staff, which they do by playing up “the fun factor” and promoting mutual respect. “If the team respects you, they will follow,” she says.

Why do they do all that they do? The energetic siblings credit their mother, Consiglia Vacchio, known by friends as Celia and by many in her family as Nonna. A retired nurse who dedicated more than 50 years to the profession, the lively 86-year-old lady loves to garden and grows fresh figs they use in the restaurant.

Next up for the Zolas team is a spring Alzheimer’s Society Walk for Memory and a restaurant project in nearby Spencerville, a nearby small town they say could use a boost to its economy.

Tony and Gina find it impossible to put a dollar amount on the past year’s endeavours. Gina says it best: “To be honest, it is not the reason for all that we participate in. It simply comes down to this: We recognize that ‘Together We Support’ and given our position and good standing with our neighbours we simply have the honour to collaborate.”