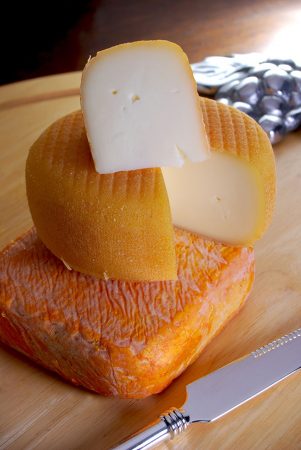 With consumers placing an increasing value on quality and craftsmanship, the opportunity for food producers to participate in the local artisanal movement has never been greater.

Consumers’ increased desire for local artisanal products, along with an expanding palate, is driving growth in the Canadian cheese market. As this market continues to mature, an array of innovative new cheeses are being developed, giving pizzaiolos across the country an opportunity to incorporate exciting new flavours and textures into their menus.

The 2015 Canadian Cheese Grand Prix, held in Montreal on Feb. 21 and 22, is sponsored by the Dairy Farmers of Canada (DFC). The contest is for cheeses made from 100 per cent Canadian cows’ milk.

Phil Belanger, jury chairman of the Grand Prix and consultant with DFC, has been involved in the competition since its inception in 1998 when 64 cheeses were entered in approximately five categories. Fast-forward to 2015 and the competition has more than quadrupled in size with 268 cheeses in 27 categories. “It’s significant. It’s a matter of consumer demand and appreciation. Obviously the producers are seeing demand and opportunity for growth, so that’s a good sign from an economic perspective. I think the popularity of our cheese also is getting known more within the country and outside the country, so these are all reasons why there’s good economic growth,” Belanger says.

Although the category winners weren’t to be announced until the awards gala on April 22, Belanger says big strides were made in flavoured, washed-rind and cloth-bound cheeses. The flavoured cheeses were broken down into particulate and non-particulate categories, with particulates containing flavourful additives such as garlic and herbs, while non-particulates were flavoured by non-solids; for example, some were soaked in liquids. This year the smoked cheese trend was so popular that it received its own category instead of being included in the non-particulate group.

Belanger notes that washed-rind cheese was another popular category that saw many innovative entries. The process involves washing the rind as it ages in order to maintain its softness and enhance the flavour. Washed rind cheeses are bathed or scrubbed with brine or alternative liquids like beer or wine to encourage the growth of surface bacteria. The cheese is characterized by a deep orange rind indicative of the time and care that goes into producing this rich, flavourful cheese.

The competition also saw the resurgence of cloth-bound cheese an old technique that requires time and craftsmanship long since abandoned by our fast-paced culture. With increasing consumer demand for local artisanal products, cloth-bound cheese is making a comeback. “It’s an old traditional technique that goes back to the European ages, way before Canada even existed, where they would age cheddar with a cheese cloth. With modern-day technology, that was wiped out, but in 2011 Cows Creamery in P.E.I. started to do the first cloth-bound cheddar [in Canada] aged with the cheese cloth for over 12 months. Now other producers in Canada are using that technique as well. So it’s new for us as a country, but it’s an old technique that goes way back . . . I think the quality and the result is what makes the big difference,” Belanger explains.

With consumers placing an increasing value on quality and craftsmanship, the opportunity for food producers to participate in the local artisanal movement has never been greater. “I think more and more, as we see artisanal cheese being recognized and appreciated by the consumer, we’ll see more companies go that route, possibly as a satellite to their existing company. We see that with beer now; the microbreweries are becoming very popular because there’s that quality that goes with it. It might not be a large increase, but I think we’ll see more and more interest going in that direction. As we realize the value behind it, I think you’ll see more consumers wanting to support their local producers,” Belanger says.

For pizzeria operators, the opportunity to support the local economy while pleasing their customers’ growing palates is a win-win scenario. “The whole idea behind the Grand Prix is to educate the consumer on the value of cheese made from 100 per cent Canadian milk. That’s why we have the symbol of the cow on all of our dairy products and as people get more of an understanding of the value behind that, not just from an economic perspective but also the quality and safety measures of our cheese, I think it’s going to be an advantage that restaurateurs and chefs can use as well, highlighting and drawing consumer attention,” Belanger explains.

It’s all music to the ears of Georgs Kolesnikovs, founder and director of The Great Canadian Cheese Festival, which runs June 6 and 7 at the Picton Fairgrounds in Prince Edward County. In its fifth year, Kolesnikovs says the festival is quickly becoming the biggest artisan cheese show in Canada. “It’s the only place in Canada where cheese lovers can come together and sample and buy artisan and farmstead cheeses from across the country. We typically have about three dozen cheese producers with a majority from Ontario and Quebec, but we always have several from B.C. and Eastern Canada as well.”

With consumers placing an increasing value on quality and craftsmanship, the opportunity for food producers to participate in the local artisanal movement has never been greater.

Kolesnikovs also established the Canadian Cheese Awards – a separate event held every two years that brings together cheese producers who use Canadian milk including goat, sheep, water buffalo and cow. The inaugural competition was held in 2014 and had a whopping 291 entries. Kolesnikovs expects to see the same number of entries, if not more, for the 2016 Canadian Cheese Awards being held in Montreal. “I think the consumer interest in local food has done nothing but boost artisan cheese production in Canada. There’s hardly anything more local than cheese. There’s the pasture, there are the cows, here’s the creamery, here’s the cheese,” he says.

At the 2014 Canadian Cheese Awards, Kolesnikovs also noticed an explosion of flavoured and washed-rind cheeses. The New Cheese category was won by Quebec cheese producer Fromagerie de l’Abbaye Saint-Benoît-du-Lac for its Fontina Fumé. The smoked Italian cheese made by the monks at St. Benoit Abbey was the clear winner. “It knocked everybody’s socks off. Here in Quebec, the fact that cheese-makers could take an Italian model and really improve on it, it was really something,” he says.

The 2014 Cheese of the Year went to Quebec’s Fromagerie FX Pichet for its Le Baluchon, a washed-rind cheese that also won Best Organic Cheese. “This cheese could stand up against any washed-rind cheese in the world. What stood out to me was the fact that when I saw the judging scores, it was head and shoulders above the others,” Kolesnikovs explains. “Marie-Claude Harvey, with the organic cows that her husband looks after, she is just able to make this remarkable cheese.”

Pizzeria owners who use fior di latte will be interested to know there is growing production of cheese from Canadian water buffalo milk, Kolesnikovs says. “The herds are growing. Five years ago I knew of two water buffalo herds for milking purposes in Canada: one in Ontario and one on Vancouver Island. There are now several in Ontario, five in Quebec and they’re probably multiplying out west as well, so it’s definitely a trend.”

Recognizing the current climate for growth, the Canadian Dairy Commission announced in January that growing the Canadian cheese market is one of its four main objectives over the next few years. The Commission plans to achieve this by trying to expand the 3(d) milk class to include all uses of mozzarella.

With innovative cheese producers backed by rising consumer demand, the Canadian cheese market is ripe for expansion within Canada and beyond, presenting the perfect opportunity for savvy pizzeria operators to infuse their menus with these flavourful, locally sourced products.

Julie Fitz-Gerald is a freelance writer based in Uxbridge, Ont., and a regular contributor to Canadian Pizza.
Print this page