Features In the Kitchen Ingredients
Vegging out 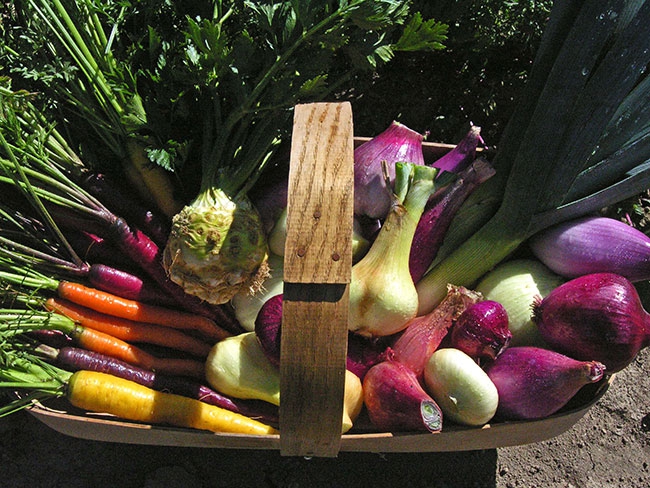 Vegetables are higher in water, says dietitian Jane Dummer. “The crust is the vehicle for all these toppings. If it’s breaking or cracking or not the right texture, it’s a whole different experience.”

Vegetables seems to be coming into their own lately.

Canadians are focusing on family relationships, well-being and healthier lifestyles in 2015, suggests a Mintel report entitled “Canadian Lifestyles 2015.” The survey found 59 per cent saw eating more fruits and vegetables as their top goal.

Millennials in particular like their veg. A recent Subway-commissioned survey found those aged 18-34 eat almost a half-serving more than do other generations.

Now more than ever, people seem receptive to bringing the garden into their diet.

There is another reason vegetables are getting attention. People, especially those who travel (and that includes millennials), are looking for new and interesting taste experiences. These days, vegetables are sometimes referred to as “sexy.”

“The success of food shows and farmers markets has meant an increase in interest in vegetables among the home consumer, but I feel that vegetables are still relegated to the back of the order sheet when it comes to restaurants for the most part,” says an organic farmer Antony John, who with wife Tina operates a vegetable farm and delivery business called Soiled Reputation in Ontario’s Perth County, just west of Stratford.

“Vegetables aren’t achieving the same sense of place that local cheese and local meat has in the restaurant industry in Ontario. I think it’s because of this inherent misconception that all vegetables taste the same no matter where they come from,” John says. In reality, he adds, there are many factors that influence how a vegetable will taste – seed, soil, climate and farmer – and together these determine its terroir.

Your customers may have different reasons for wanting to eat their vegetables, but you can appeal to both their sense of balance and their sense of adventure by embracing the exotic and preparing everyday vegetables in creative ways.

New varieties are trendy
Dietitian Jane Dummer, who specializes in agri-food, functional foods and food safety, says a lot of people still enjoy rituals like Friday-night pizza but want pizza with a health benefit. In doing this, they are reaching out beyond typical vegetable toppings.

“I’m seeing not just mushrooms and onions. During asparagus season I saw a lot of pizzas with asparagus on them,” Dummer says.

She also is seeing quite a bit of arugula in the smaller restaurants as well as different types of tomatoes – grape tomatoes, heirloom tomatoes – that are sometimes used instead of tomato sauce.

Restaurants are looking for vegetables that taste good and are consistent, and new varieties that have more flavour and a unique appearance, John says.

Customers who buy directly from him ask for vegetables they have seen overseas. This is an easier craving to satisfy today than it was years ago as seed suppliers are travelling the world’s food markets to find new varieties, John says. It’s been a shift over the years from chefs requesting varieties to him approaching restaurants with new varieties.

If you’re looking for something unusual, the little-known romanesco cauliflower may fit the bill. “It is chartreuse green and it’s the progenitor of the modern cauliflower,” he says. “It looks like a fractal, geometric drawing, with each floret an exact replica of the next size one. It’s a lot nuttier than modern cauliflower.” He uses the romanesco as a pizza topping by cutting it into smaller pieces and then cutting them in half. “They get this beautiful caramelization on them under the broiler with a little bit of olive oil and it increases the sugar in them.”

Experiment
Dummer encourages chefs to experiment with ways of preparing readily available varieties. For example, she has been experimenting with spinach and grappling with the question of when to put the spinach on versus the rest of the ingredients. “Spinach is so available. If you’re not close to a farmers market or a decent grocery store, sometimes you can’t get the variety. But you can always pick up spinach.”

John likes to cook as well, having taken courses with a local chef for many years. When making pizza he and Tina try to “eat through the seasons.” In spring, they use asparagus, romanesco cauliflower, basil and heirloom tomatoes.

Dummer too sees an opportunity in playing up the seasons. “Wouldn’t it be fun to have a butternut squash pizza in the fall or a sweet potato pizza coming from Norfolk County (Ontario),” she says, pointing to the recent trend of craft breweries bringing out seasonal drinks. “Why not have more options when vegetables are in season.”

“Eggplant pistachio is quite exotic and gives you the fat from the nuts,” Dummer says.

John grows many varieties of peppers, a vegetable trend that shows no signs of slowing down. Ram’s horn peppers are really sweet and great on pizza, he says. They also grow Japanese frying chilis called shishito peppers, which are cigar shaped. “They are very mild with an ‘herbally’ taste and, sliced lengthwise on pizza, they are really good, he adds.

Dummer draws our attention to the sauce base. “Try using a vegetable puree such as corn instead of a pesto or tomato sauce,” she suggests. “If you have a favourite vegetable why not use that as a base.

“If you start off with a pesto you can build a pizza that will help increase your vegetable intake. From the artisan side, it could be quite a fun experiment.”

Things to remember
Pizza chefs looking to feature vegetables as star players on their pies would do well to remember the basics.

John suggests chefs ask questions when buying vegetables. Unfortunately, vegetables are sometimes labelled misleadingly for their origins, he cautions. “It’s buyer beware. Therefore, it’s important to ask questions about the provenance of a vegetable: where was it really grown?”

Dummer highlights cleanliness. “I always tell people to make sure your vegetables are well washed. Even pre-mixed salads I still wash. For ultimate freshness, as soon as you cut it, use it. It’s about understanding day-of preparation,” she says.

Also, consider cooking vegetable-heavy pizzas at a lower heat as vegetables cooked at a high heat start to lose some of their texture and freshness, she says.

However you do it, the experts agree that including vegetables broadens your menu’s appeal.

“Have the combinations and have a variety,” Dummer says. “In general, we’re trying to eat more vegetables, and people will ask me how to do that,” she says.

“I say, ‘Why not pizza?’ It’s such a great vehicle to get more vegetables in.”