Features In the Kitchen Ingredients Recipes Techniques
Using beer to enhance a crust: The Pizza Chef 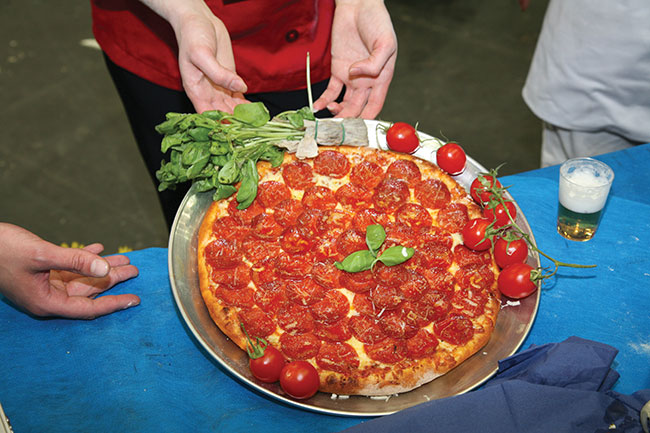 Does the amount of yeast need to be reduced since there is yeast present in beer? The answer is no.

I’m going to talk about something I have a lot of experience with: using beer in a pizza dough recipe.

Back in 2004, when this magazine held the first contest for Chef of the Year, it was inspired by another Food Network competition show. There were 40 common ingredients and you were allowed to choose five secret ingredients to complete three recipes from scratch.

I spent quite a bit of time brainstorming about the ingredients and about the contest. I wondered what made Canadian pizza essentially Canadian versus New York-style pizza, Chicago deep dish, Chicago cracker-thin crust pizza, California-style pizza, and Italian-style pizza. Each of those styles of pizzas has a distinctive characteristic and taste that make them unique to their region. Back to my original question, what makes Canadian pizza just that? One night, while looking in the fridge, the idea hit me. Canadians have been enjoying beer and pizza for decades. What would happen if I put the beer right in the pizza dough?

It took me three or four test batches before I was able to answer that question. I made very small test batches yielding only four dough balls so it wasn’t like I needed a whole keg of beer to figure it out. I did a few batches and increased the amount of beer only while decreasing the water by the same volume. I found that in order to impart any of the beer flavour to your pizza crust, you need at least 50 per cent of the liquid to be beer.

Next, I varied the fermentation, or proofing times. I always allow any pizza dough at least 24 hours to proof in a walk-in cooler: this is known as slow fermentation. Any good dough needs time to develop the flavours. In the case of my beer dough I found that the sweet zone was following a 36-hour fermentation.

Once the dough was given sufficient time to develop the flavours, I baked it up with just a little sauce and cheese. The flavour of the beer is baked right into the pizza dough, while all the alcohol bakes off – therefore it’s safe for all ages to eat a pizza crust made with beer. In the case of our signature beer dough, the crust bakes to a crisp golden brown on the outside while still being soft and bread-like on the inside. Satisfied with the results of my tweaking, I submitted the finished recipes. A few weeks later I was delighted to hear that my recipes were chosen, and I went on to represent Canada in Las Vegas in the 2005 Italian Chef Wars competition. I took this dough recipe to competitions in Italy and New York and did very well there too.

Using beer in your pizza dough adds a unique flavour and appeal to an otherwise ordinary pizza. The main thing to remember is that you should choose a beer that has a distinctive flavour of its own. Over the years, I’ve played with many different beers in my original beer pizza dough recipe, varying the hydration levels and also the types of flours, and I can say that each beer imparts its own flavours and properties to the crust.

I am often asked this question: Does the amount of yeast need to be reduced since there is yeast present in beer? The answer is no. The amount of active yeast present in the beer is typically not sufficient to warrant reducing or eliminating yeast in the dough recipe. This is a general rule of thumb, but it is possible to make a starter, which is often substituted for fresh yeast, from just beer, flour, salt and time.

In 2008 I flew to San Francisco and attended an Italian pizza certification course from a highly accredited Italian pizza school. It was the first time this course had been taught on North American soil. There I learned that Italians have been using beer and wine in their pizza dough recipes for centuries, because in many parts of Italy the water is not potable. If you don’t have good water, then you need to use something that has already gone through a filtration process.

Since then I’ve shared my award-winning beer pizza dough recipe with friends from around the world. My friends from Ireland used Guinness beer in their pizza dough one year and Jameson whiskey the next, and placed very high in competitions. A friend from Ohio used it with a craft beer that was popular at his high-end pizzeria. A friend from California tested it with a Pinot Grigio. I also share a version of the recipe in pizza-making classes I teach, in pre-COVID times. When you have a good pizza dough recipe, it can easily be modified to accommodate regional preferences and become a signature feature of your menu.

I am very glad that I took part in Canadian Pizza magazine’s recipe contest over 15 years ago: it opened doors for many incredible experiences, including becoming a regular contributor here. I’m also grateful to have met so many other talented pizza chefs from Canada and around the world. While each chef will change up their dough, toppings, cheeses and sauce, it’s still pizza – a food that unites everyone.

Wishing you all a happy, healthy and successful year ahead.