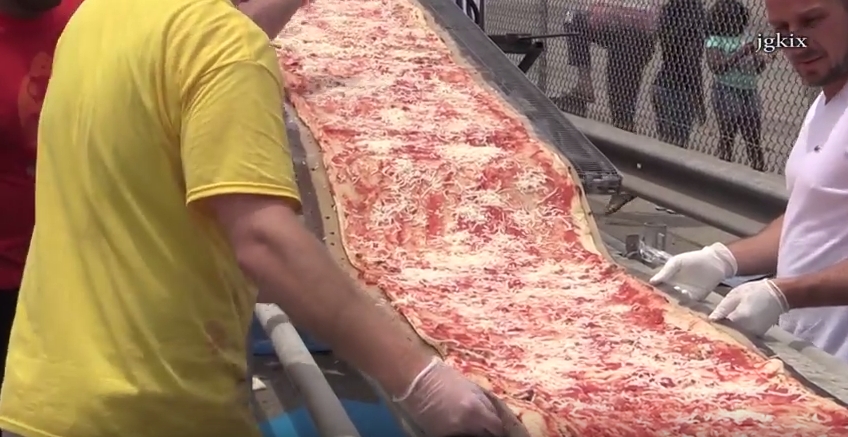 Fontana, CA – On June 10, a U.S. team of chefs, equipment specialists and volunteers has broken Italy’s record for world’s longest pizza and a Canadian oven expert played a key role in the event.

The team of about 400 people worked at the Auto Club Speedway near Fontana, Calif., to make the record-breaking pizza, which was 1.93 kilometres (6,333 feet) long.

It included several sub-teams of pizza makers, scaffolding constructors, engineers and other parts of the undertaking.

One enthusiastic Canadian played an important role in the event. Philippe Levasseur, president and CEO of Les Entreprises Dynamix Global Inc. / Dynamix USA Corp in Montreal, was one of four on the engineering team. Levasseur’s job was to make sure everything was running smoothly.

Levasseur’s preparation included several trips to California in the weeks preceding the record attempt to check on three Italforni conveyor ovens needed to cook the sauce-and-cheese pizza. The ovens were mounted on customized scaffolding so that would allow them to move over the mammoth pie on specially designed scaffolding and dollies.

After months of planning and six test runs with different doughs, the engineering team started at about 7 p.m. on Friday, June 9, the night before record day.

They needed to proof about an hour before going into the oven.

They made the pizza in sections of three feet by 20 inches, storing them in a refrigerated truck as they went.

They laid down a bit more dough, then started making the pizza in earnest at about 10 p.m.

Through the night and all the next day, the ovens were moved on scaffolding and rollers up the table and the pizza was fed through them. There were a few minor glitches, including an iissue with the pizza getting caught in one of the ovens but the team were able to resolve all issues quickly.

The Saturday event was open to the public and as onlookers watched, the team finished at 3 p.m. on Saturday, June 10, with the pizza a whopping 6,333 feet almost 1.3 miles – long. They beat the previous record set by Italy by about 300 feet. Proceeds and finished pizza were given to area charities and food banks.

So how was the event? “Besides being awesome, it was great being part of something big. And it was gratifying to break the record under all these conditions,” Levasseur told Canadian Pizza.

Some of those conditions included tight health department rules that required the pizza to be boxed within four hours, holes in the pizza dough that had to be patched as they went along.

The main issue was humidity, he said. They had to use propane to heat the ovens and the propane got cold.

The record event was sponsored by PizzaOvens.com, which is owned by Fash Asvadi, driector at PizzaOvens.com and Italforni USA Ovens.

The team received certificates from Guinness World Records staff, who were on hand to witness the attempt. The record will be made official and the event is expected to be televised on the Discovery Channel.