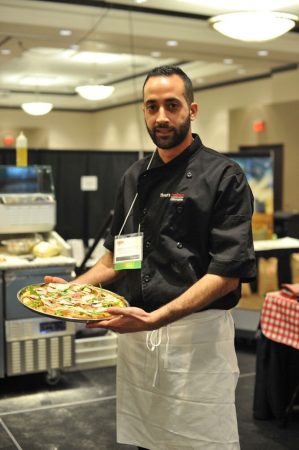 Last October, Fernando D’Agostino did himself and his boss proud, putting together a signature pie that landed him in third place at the Canadian Pizza Chef of the Year competition sponsored by Saputo Foodservice and Moretti Forni.

“It was already on our menu, but we tweaked it a bit,” says the slightly shy young chef.

It was D’Agostino’s first pizza competition and he seems to take the pressure in stride. “We had the dough ready-made and the ingredients prepared,” he says. “If anything, using a different oven in an unfamiliar setting was the biggest challenge.”

D’Agostino has worked at That’s Italian Ristorante in Woodbridge, Ont., for the past two years.

It was restaurant owner Joe Lombardi’s idea for Fernando to enter the competition and Lombardi’s recipe made it to the podium with him, D’Agostino says. Lombardi says his superstar pizzaiolo was able to channel his pride in what he does to overcome his modesty and excel on the competition floor.

The restaurant, which opened a smaller location called That’s Italian Express in Richmond Hill in October 2013, has been in business since 2008. Lombardi is part of Toronto pizza history, his father having opened Regina (an offshoot of city institution Vesuvio’s) on College Street in 1982.

Many of the restaurant’s customers – particularly those in Richmond Hill – are of Asian background, Lombardi says, and many are well travelled and looking for an authentic Italian eating experience that matches their old-country experience. They seem to really appreciate the food, he says, often asking staff which items they recommend, snapping photos of their dishes and expressing delight when offered a frequent-customer perk such as a complimentary limoncello liqueur.

D’Agostino likes his work and especially the fact that at That’s Italian, pizza is treated with just as much importance as any item on the menu. It’s not just an afterthought, he says. “It makes me feel appreciated,” he says.

He doesn’t have formal chef training, but started his working career as a teenager at a local Brampton, Ont., pizzeria where he and his family ate every Friday night.

“My parents asked if they would give me a job,” D’Agostino says. While the food business was not a deliberate choice of vocation, he warmed to the work as he gradually took on more and more responsibility.

The Sidernese is named for the town of Siderno in the Calabria region of Italy. D’Agostino enjoys making this house specialty pizza because it demands extra attention to detail and extra time spent to make it visually appealing.

“You have to place everything evenly, and you can’t have two much of one topping in one spot,” he says.

D’Agostino loves to play tennis in his spare time. And when he’s not whipping up thin-crust pizzas himself, the young foodie enjoys checking out pizzas at other restaurants.

He says, “Sometimes people ask me if they would like a certain topping on a pizza. I don’t think there are any limitations on pizza. I tell them, “If you like something off a pizza, you’ll like it on a pizza.”

Indeed, there seem few limits to what this pizzaiolo can do.

The Sidernese
Here is Fernando D’Agostino’s third-place recipe for Canadian Pizza Chef of the Year.