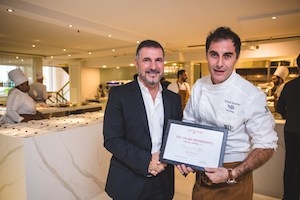 Created in partnership with Nick Di Donato of the Liberty Entertainment Group, Don Alfonso 1890 Toronto is the first North American location of world-renowned Michelin Star chefs Alfonso and Ernesto Iaccarino’s Don Alfonso 1890. It is located in the historic Consumer’s Gas Building of 1852 on Toronto Street in downtown Toronto.

Showcasing the cuisine of Chef Ernesto Iaccarino and the fresh flavours of the Amalfi coast, Don Alfonso 1890 is an internationally recognized award-winning concept with locations in Sant’Agata, Amalfi Coast, Italy; Levello, Basilicata, Italy; Helena Bay, New Zealand; Macau, China, and now Toronto, the release said. Its cuisine is characterized by its modernity, Mediterranean flare and the exceptional quality of the raw materials used.