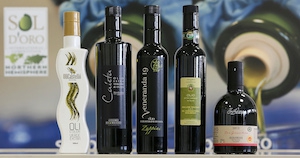 Verona, Italy –With one gold medal more than last year, Italy improved its share of the medals to defeat Spain 12-3 in the duel between the world’s best extra virgin olive oils this week in Verona.

The competition saw Italy take four out of five gold medals envisaged in the award categories – delicate, medium and intense fruit, organic and single-variety – as well as all five silver medals and three bronze medals. Three medals, one gold and two bronze, went to Spain.

The announcement of the winners of Veronafiere’s international competition rewarding the best extra virgin olive oils in the world took place this afternoon in Verona during the first day of EVOO Days, the new Veronafiere-Sol&Agrifood training and networking initiative in the olive oil sector.

Medal winners are entitled to be display the award received and award-winning oils will be given pride of place at Sol&Agrifood, the Quality Agro-Foods Exhibition April 9-12, 2017. For the second year, olive oils earning special mentions will be used during the finals of the Jam Cup, a Sol&Agrifood event that highlights young members of the Italian Chefs Federation.

The full list of Sol d’Oro Competition 2017 special mentions is available on the site www.solagrifood.com.