The rise of fast-casual 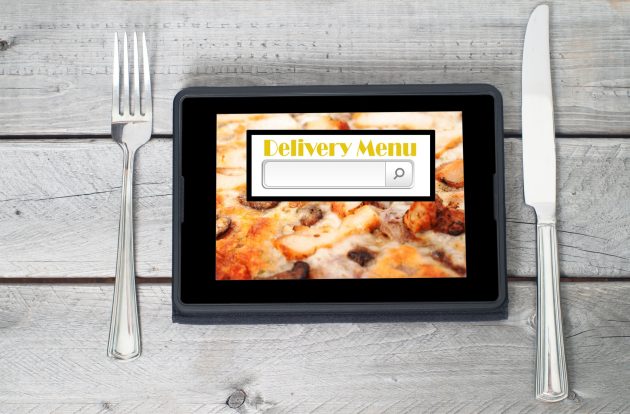 Competition for share of Canadian restaurant spending is heating up, thanks, in part, to an emerging category that’s attracting increasingly confident consumers in droves.

Fast-casual restaurants let the diner to place a custom order at the counter. They promise higher quality of food made with fresher ingredients than what’s found on the menu at a typical fast-food outlet, sold at a slightly higher price point. They also usually offer a more comfortable, inviting atmosphere in which dine-in customers can enjoy the meal than a typical quick service restaurant (QSR) offers. “It’s a variation on quick-serve with higher quality ingredients – and often the ability to select ingredients – and it may or may not include having the food delivered to the table. That’s how I define it: higher quality, higher cheque average and potential delivery to the table as opposed to the customer taking it to the table,” explains Jeff Dover, principal with fsStrategy Inc.

The fast-casual concept has resonated well with consumers and gained a foothold in the Canadian market. According to research from The NPD Group, fast-casual now accounts for one per cent of the total foodservice market in Canada – a figure that’s projected to grow in the future. “Fast-casual in Canada has been in dynamic growth for five years,” notes Mark Dempsey, director of client
development for foodservice with The NPD Group. “Over the course of the next three or four years we expect to see fast-casual’s share continue to grow, and certainly well ahead of the marketplace.” Dempsey says that within the next three years, the sector could account for as much as five per cent of the total commercial foodservice pie.

The rise of fast-casual could spell trouble for many pizza operators. According to NPD data released in May, all of the top pizza players across the country are seeing declines, with traffic down anywhere from one to 10 per cent. These declines are seen at both QSRs and full service restaurants (FSRs). Overall, Dempsey says, year over year traffic in the pizza category is down six per cent.

“This is a continued decline over the past couple of years,” he explains. “Action is required to stop the continued loss of traffic and dollars from the pizza marketplace. The fast-casual marketplace is certainly a key contributor to the decline that has been seen in QSR and FSR pizza.”

“In Canada the number of occasions where people dine out has been relatively flat since we recovered from the last recession, so as the fast-casual segment is growing, the growth is coming from somewhere else,” Dover adds. He says the fast-casual segment is perfectly positioned to attract full-service diners seeking to “trade down” their cheque average as well as quick-service customers seeking to “trade up” their dining experiences.

Dover characterizes Canada’s fast-casual segment as being “in its infancy,” though he notes that the concept has already carved out a loyal following among millennials. This generation of consumer, loosely defined as those born between the early 1980s and the late 1990s, are now the largest demographic dining out. In fact, millennials recently overtook baby boomers in restaurant spending. As millennials flex this newfound economic muscle, savvy foodservice operators continue to ask, “What do millennials want?”

This attitude is reflected in the changing ways in which millennials – as well as many other consumers – are using restaurants. NPD data shows that QSR pizza operators in Canada have taken a five per cent hit in lunch traffic and a dramatic nine per cent hit in dinner traffic. “We’re finding consumers increasing their snacking occasions as opposed to going in for the main meal parts. Of course, when you go in for pizza for a snack, you’re only buying a slice or two as opposed to buying a whole pizza,” Dempsey says. “It’s an interesting time for QSR pizza operators because they need to try and turn around this snacking trend and bring consumers back to the traditional core part of their business – lunch and supper occasions.”

But, Dover notes, these changing day part visits aren’t the only challenges posed by the habits of millennial consumers. “They want to be able to customize and they want to have authentic ingredients, authentic flavours and authentic preparation.”

This appetite for authenticity has helped drive the success of the fast-casual powerhouse Chipotle Mexican Grill. The chain’s 1,700-plus locations serve burritos, tacos, and salads made from ingredients such as steak marinated in chipotle pepper adobo and hot tomatillo red-chili salsa. Authentic flavours are also driving the success of ShopHouse Southeast Asian Kitchen, Chipotle’s Asian-inspired fast-casual concept. ShopHouse allows customers to pair rice, noodles, or salad with ingredients such as chicken marinated in coconut milk, charred corn and tamarind vinaigrette to create a customized taste experience.

Sustained, strong performances by brands like Chipotle and ShopHouse have inspired other foodservice operators to take a look at their menus and identify opportunities to innovate.

“If you watch what’s happening on menus, a lot of restaurants that have been successful in maintaining their share or growing their share of visits are doing it with authentic foods or new flavours,” Dover says. “Younger diners like to be able to say they tried something new. Restaurants that recognize this and adapt their menus, even if it’s with a limited time offer, are more successful than a restaurant or restaurant chain that isn’t doing any menu innovation.”

Many pizza chains have already rolled out specialty pies to cater to this craving for authentic flavours. Boston Pizza’s offerings include a Sriracha Chicken pie topped with Sriracha pizza sauce, Sriracha chicken and sesame seeds, and a Butter Chicken pizza topped with creamy butter chicken sauce and diced butter chicken. Pizza Hut offers its own take on this Indian-inspired flavour combination. Meanwhile the Thai Sensation from Topper’s Pizza features chicken strips, green peppers, roasted red peppers, and sweet and spicy Thai sauce. The chain’s Mexican pie is made with salsa in place of tomato sauce and topped with Mexican beef, onions, tomatoes and jalapeño peppers. Pizza Pizza has also responded
to demand for menu innovation, creating an “international” line up of small, gourmet pies topped with ingredients associated with countries such as Greece, Thailand, Mexico and Argentina.

All of these offerings hint at one advantage that gives pizza a leg up when competing with fast-casuals. “We already allow for customization in a full-service pizzeria: you’ve got your staple pre-topped pizzas, but you can always order a custom pizza,” Dover says. “In that way, pizzerias have been innovators in allowing customization to do what you want on a pizza.”

Another factor that works in pizza’s favour is the growing trend of sharing. There is a growing consumer demand for tapas-style group meals that can be easily shared. “Sharing of meals is in significant growth and has been for the last several years. We expect to see that trend continue,” Dempsey says. “Sharing fits perfectly with fast-casual pizza; it’s aimed at groups who are looking for higher quality products in fun, casual environments.” 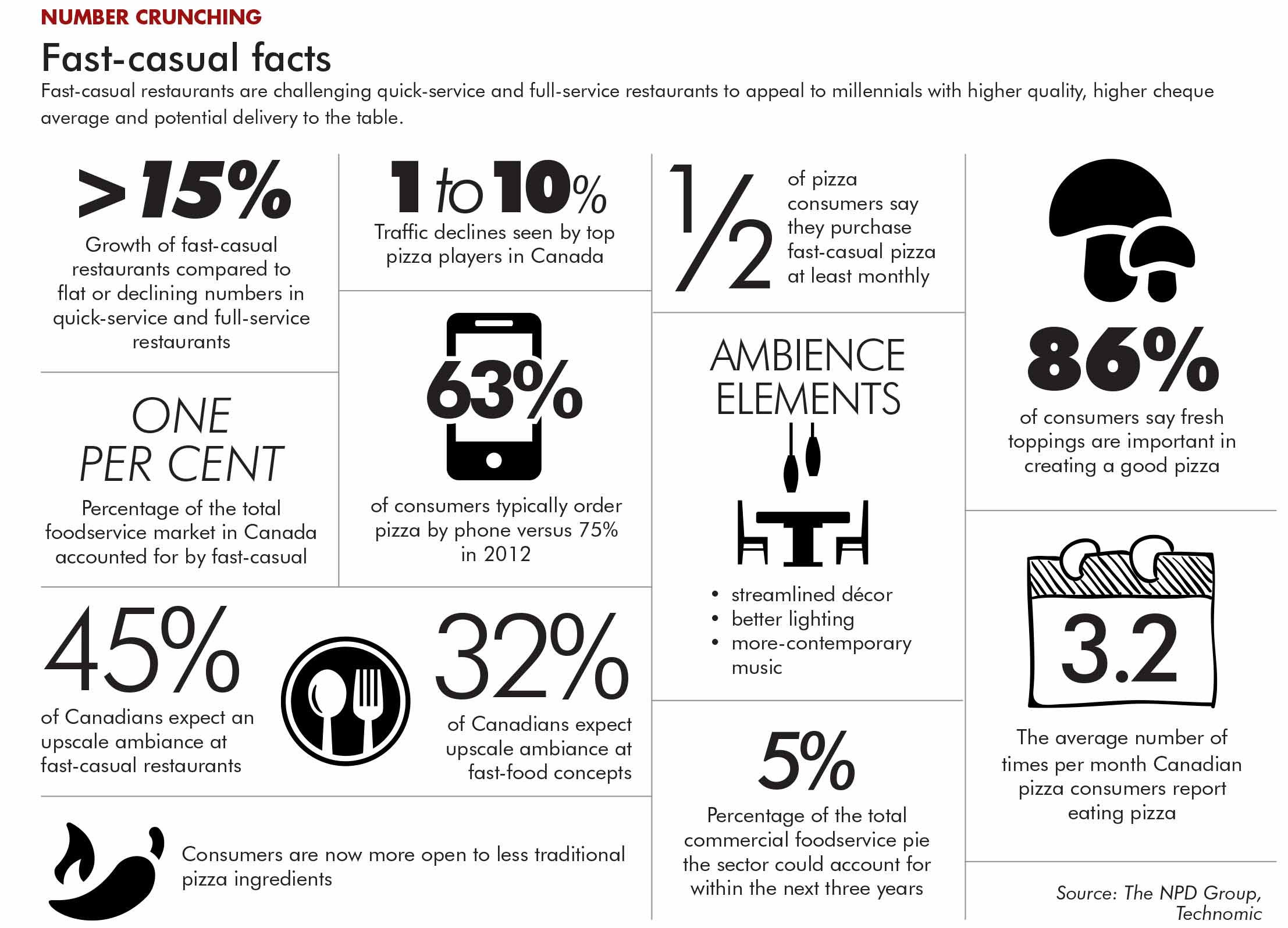 The future of fast-casual in Canada
Fast-casual is here to stay, but how the market shapes up – particularly with respect to pizza – remains to be seen.

“No one is really owning fast-casual pizza, today. There’s an opportunity for someone to come in and own that space,” Dempsey says. “The time is right for pizza operators to move towards encouraging dine-in occasions and to drive up the cheque by offering innovative sharing options for large groups and by providing high-quality beverages and desserts that aren’t available at traditional pizza outlets.”

The fast-casual segment seems set to make some serious inroads across the country. This year Blaze Pizza plans to open the first of at least 60 franchise units here in Canada, joining a number of home-grown operators already making a go of fast-casual pizza. The build-your-own pizza chain is set to open units in Ontario, Alberta, British Columbia, Manitoba and Saskatchewan beginning this fall.

These examples offer up one possible future of fast-casual pizza in Canada: established brands turning to new channels to reclaim and grow their share of the market.

One thing is for certain: the fast-casual concept is here to stay and pizza is perfectly positioned to become a competitive offering in the foodservice market.

Hungry for tech-enabled conveniences
Many Canadian consumers are already turning to fast-casual options to purchase pizza. Technomic’s 2014 Canadian Pizza Consumer Trend Report found that half of all pizza consumers (51 per cent) purchased fast-casual pies at least once a month. Convenience was among the top three drivers of pizza purchasing occasions, along with cravings and affordability.

Incorporating technology into the customer experience can go a long way toward offering the kind of convenience that many consumers find so appealing in many fast-casual restaurants. For pizzerias with well-established delivery programs and online or mobile ordering systems, these time-saving tools can help win over millennials and other busy consumers. Online ordering has proven successful for U.S. based fast-casual pizza chains such as Blaze Pizza and Pieology, which both offer customers the option to order their customized pies online for pickup in store. Pre-ordered pizzas are assembled and then set aside; the customer must check in at the counter before staff cook the pizza.

Providing tablets and kiosks that customers can use to place their in-store orders and pay for their purchases can bring further convenience to the customer experience while reducing staffing requirements. However, Jeff Dover, a principal with fsStrategy Inc., cautions that despite high consumer acceptance for using technology to place orders, his experience shows tolerance is much lower when devices are used to try and upsell customers.

Technomic also reports that in addition to ordering and payment technology, millennials want digital loyalty programs and free Wi-Fi from the restaurants they frequent.