Features Profiles
The Queen of Kensington

Nestled on a corner in one of the nation’s most storied
neighbourhoods is the restaurant home of Canadian Pizza Magazine’s 2007
Chef of Year. L 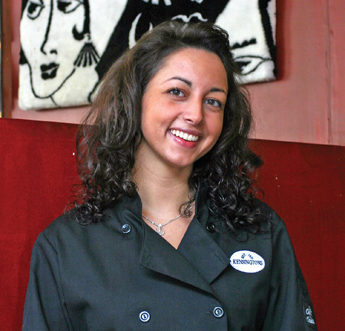 Nestled on a corner in one of the nation’s most storied neighbourhoods is the restaurant home of Canadian Pizza Magazine’s 2007 Chef of Year. Liliane Sibonney, a 28-year-old restaurateur, opened Kensingtons three years ago, seeking to bring an eclectic blend of world foods to the famous community.

Sibonney, who studied food and business management at George Brown College, has quite an exposé on international cuisine herself. Born to Moroccan parents, she has grown up with a passion for Mediterranean food. Her father, a partner in her current venture, has spent a career in the food industry. As a child, she enjoyed the delights brought to the dinner table by a Philippino nanny. On her own, she has worked in Florida as a personal chef, and in Bermuda for a year.

“It came very natural to me,” she said of her work in the kitchen. “And growing up in Toronto, there was no shortage of what you can eat.”

The neighbourhood she now calls her culinary home continues these worldly influences. Kensington Market is generally considered where the world meets Toronto. Chinatown borders the area to the southeast, bringing a mix of Asian flavours. It also has a large Caribbean population, and attracted immigrants from Africa, Iran and Vietnam in the past two decades.

“The people we cater to have very diverse cultural backgrounds. But that is what people are coming to the market for,” she said.

Looking out from a quiet table inside Kensingtons one can see the bustle of the produce market, a cheese shop specializing in hard to find cheeses from around the world, Toronto’s most popular butcher shop European Meats, and the latest – and somewhat controversial – neighbour, Cobs Bread, a British Columbia-based franchise operation. Chain stores are not highly regarded in the Kensington community, as locals fiercely defend the independent mom and pop philosophy that has existed since the 1920s.

“Here, you’re at arms length to any fresh ingredient you need,” Sibonney said. The accepted – but not verified – claim is that Kensington Market has the widest selection of fruits and vegetables of any other in the world.

And, with the availability of such ingredients, Sibonney said she has been working towards expanding her menu. A portion of the restaurant is covered by a large curtain – the construction zone where her new kitchen will be.

“We’re at a transition point right now,” she said. “But what is funny about Kensington Market is that customers will come and sit for hours. They’re
really into the food.”

Sibonney said she also tries not to get too carried away with it all.

“We try to stay fresh and true to the ingredients. I try not to be to be limited to cooking to any particular style or trend. It’s more about melding the ingredients together and letting the food speak for itself … keep it simple enough so it will be palatable for all.”

Sibonney called on her culinary background and infused it with classic Italian dishes to create an exotic Mediterranean entry for the competition. Competitors are given a list of ingredients they can use to create a three-course meal for six servings. They are allowed to use five secret ingredients, and must work to keep the recipes marketable, practical and appealing.

The ultimate goal is to earn the chance to travel to the International Pizza Expo in Las Vegas in March to compete in the Italian Chef Wars. Contestants from six countries are given the exact same ingredient list and 90 minutes in which to impress a panel of judges. The winner receives a cash prize and the opportunity to return in 2008 to defend their title.

“(The) Italian Chef Wars has quickly become one of the most prestigious cooking competitions in the pizza industry. It’s a great contest because it not only requires its participants to come up with innovative recipes, but it also places them under pressure,” said Pete Lachapelle, publisher of Pizza Today and sponsor of the competition. “They must prepare three dishes in just 90 minutes, so their technical skills are showcased as well as their artistic and conceptual skills. Ninety minutes may seem like a long time, but past chef wars contestants often remark how quickly the hour-and-a-half goes by.”

Lachapelle said Sibonney will compete against chefs from the U.S., Italy, Scotland, New Zealand and Australia.

“I looked at the competition ingredient list and tried to see how it could be done better. I was inspired by the traditional Italian dishes … and wanted to make something that was marketable and that people could recreate in their own establishment,” Sibonney said of the competition.

With the competition rules, Sibonney designed her three-course meal as such:
Appetizer: Mediterranean-stuffed chicken breast in tomato saffron vinaigrette over linguini Main Course: Lasagna pizza, affectionately nicknamed the “Garfield”
Dessert: Chilled Italian zabaglione tart with warm Marsala-balsamic sauce
“I tried to think how could I be original and still be able to do it,” Sibonney said of the lasagna pizza. “It comes out like a lasagna, but tastes like pizza.”

In her submission, she explained that she nicknamed the recipe after the popular cartoon cat Garfield, “because everyone knows he was born at an Italian restaurant and only eats lasagna.”•

Related
Queen of Kensington reigns in Vegas
Mystery Ingredient Challenge
What can pizzerias gain from Chef of the Year?
Queen Margherita Pizza on the move