The popular pie for the day before 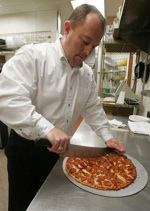 Pizza sales on the day before Thanksgiving are 50 percent to 80 percent
higher than on a typical Wednesday, said Tom Santor, spokesman for
Donatos. That makes Thanksgiving Eve one of the biggest days of the
year for pizza.

"Everybody is running around trying to prepare for Thanksgiving. The
stove is full. It's really, really hard to cook on Thanksgiving Eve, so
pizza is the perfect alternative. It's almost tradition now,'' Santor
said, adding that Donatos is introducing a new two-pizza big value box
with 32 pieces.

Pizza is a $30 billion-plus industry with about 3
billion pizzas sold each year in the U.S. It accounts for more than 10
percent of all food service sales.

What are the favorites?

Some other facts about the pizza industry:

» Each man, woman and child in America eats an average of 46 slices (23 pounds) of pizza per year.

»
Approximately 350 slices of pizza per second are consumed in the U.S.;
93 percent of Americans eat at least one pizza per month.