You know, sometimes being in the pizza business has its
perks. You meet so many different people and you never know who some
people really are. 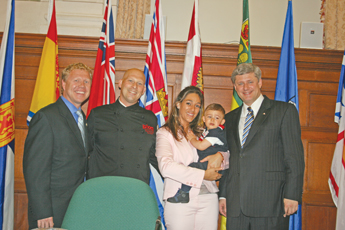 You know, sometimes being in the pizza business has its perks. You meet so many different people and you never know who some people really are.

One longtime customer of mine, Rick Dykstra, was elected Member of Parliament for St. Catharines and currently spends a good part of his time in Ottawa.

We always talk a little about what’s going on in the political arena and the issues of the day. Not that long ago he dropped into my pizzeria one night after returning from Ottawa, and he told me that the caucus was about to close the session for the summer.

As we talked about some of the things that were going on, I thought to myself wouldn’t it be great if I could make pizzas for the Conservative caucus on their last day before summer break. I asked if it could be done:  serving the Prime Minister and the rest of the cabinet ministers wine and pizza.

Rick thought this was a brilliant idea and that he would let me know if the arrangements could be made. About two weeks before the session ended, I received confirmation from his office and was told that everything was set to go.

Let me tell you, fellow pizzaiolos, there aren’t too many things that get me really excited, but I was very excited at the prospect of making pizzas for the Prime Minister and his cabinet.

The fine folks at Hernder Estates and Creekside Wines provided me with the drinks, and off I went to make 20 pizzas for 150 members of parliament. I par-baked the pizzas in my pizzeria, and then finished them off in Ottawa in the kitchen there.

What a great pizza party it was. Everyone enjoyed the pizzas and the wine and we were complimented by all the cabinet ministers, including Rona Ambrose, Jay Baird, Peter MacKay, Jay Hill, Tony Clement, Rob Nicholson, Gerry Ritz, and none other than the man himself, Stephen Harper, who enjoyed a few slices of pizza.

It was an honour to have met all these wonderful people who try their best to make this nation as great as it is.

I think as a Canadians, we bitch and complain about a lot of the wrongs that may or may not have been done by our government, but at the end of the day they are just the same as you and me. They are trying their hardest to make a difference, not only in our own country, but throughout the world.

I hear it all the time, people saying how it is hard to run a business, and how being self-employed comes with lots of ups and downs. But imagine for a moment trying to run a country. That takes a lot of time, patience and commitment.

These people working on Parliament Hill have dedicated their lives to ensure we have the chance to run our businesses and that we will always have our rights, freedom and way of life that we have today.
We can’t blame the hardships of our personal lives on these people, and we definitely have the tools to make something of our lives because of what our government has fought for, and what they continue to fight for. These people do it for us; this is our country, and we should be more patriotic because this great nation deserves it.

I would like to thank Rick Dykstra and his staff, all the cabinet ministers, and, of course, Prime Minister Stephen Harper, for allowing me to come and make pizzas for all of you. Godspeed.