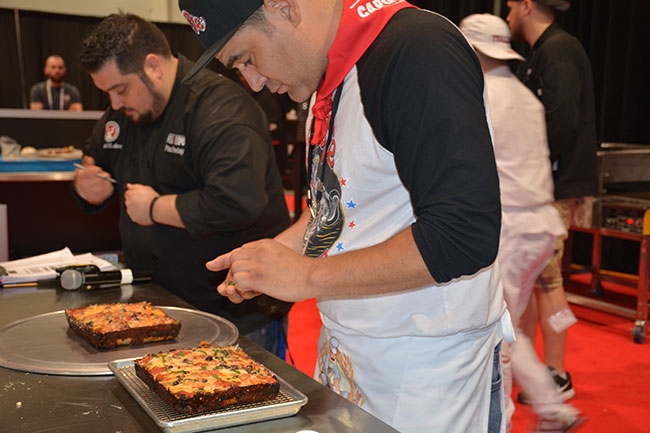 The pizzaiolos competing at Expo were extremely creative, some mimicking Detroit pan-style pizzas, as did second-place finisher Vincent Rotolo of Evil Pie in Las Vegas.

The gluten-free market has been one of the fastest growing markets in North America.  According to Transparency Market Research, it’s estimated to reach $4.89 billion dollars by 2021. Approximately one in every 133 Canadians has celiac disease or some form of gluten intolerance and less than 10 per cent of these people have been officially diagnosed.

According to Agriculture Canada, almost one-third of Canadians (10 million) are looking for gluten-free products.

Many Canadians are opting to follow gluten-free diets, after hearing about the healthful benefits.  Something else to note is that the celiac and gluten-intolerant community is a very close-knit group. Perhaps you’ve been considering whether there is enough demand to add it to your menu. There are many factors to look into if you’re going to do it right.

Back in 2008 we were getting dozens of phone calls every week, asking if we made a gluten-free pizza. People with gluten
allergies and intolerances were begging us to make a gluten-free pizza they could eat. Something palatable was requested, but they were really hoping for something tasty. Often, the catalyst for contacting me was the recent diagnosis of a young family member with celiac disease, which meant that pizza was no longer a meal option for the whole family.

It took me a long time to develop my gluten-free recipe. My first thought was that I didn’t have the right palate for it. I needed the same people who were requesting gluten-free to be my tasters.  My recipe is made in house from scratch, and when we make it we take special care to limit the exposure to wheat flour. I also polled the people making the request to see if there were other allergies or dietary restrictions to consider. I discovered a majority were also allergic to dairy and some were strict vegans as well. Many North American gluten-free recipes are made with eggs and or milk. I developed mine to be dairy-free and vegan-diet-friendly.

Even with a winning recipe, I still had to figure out how to incorporate a from-scratch gluten-free pizza into a busy “wheat” pizzeria operation. I asked friends in Australia and Italy how they have been able to successfully offer it on their menus for the past 15 years. I then developed our system using many suggestions from these experts. Of course, all this had to be done while taking care not to cross-contaminate the pizzas.

Since I developed my recipe, dozens of gluten-free flour mixes and pizza crust options have become available. Everything from a pre-mix of gluten-free flours that lets you just add water to par-baked shells that come frozen and need to be thawed, sauced, topped and baked.

In March of this year, I had the honour and pleasure of judging the gluten-free pizza baking category in Las Vegas at the International Pizza Expo. I have to say,
gluten-free pizza has come a long way in the past decade! The pizzaiolos were extremely creative, some mimicking Detroit pan-style pizzas, others developing their crust with a double fermentation. With the double fermentation, you could see the porosity in the crust, and – as with all pizza crusts that are given time to rise – the taste was phenomenal!

The pizzas my fellow judges and I rated highest had a blend of gluten-free flours and used different rice and bean flours and starches. In total, we tasted and evaluated 31 gluten-free pizzas that day, and the whole experience has given me renewed passion for further developing our own gluten-free pizza menu.

Diana Cline is a two-time Canadian Pizza magazine Chef of the Year, three-time winner of “Canada’s Best Pizza Chef” at international pizza competitions, a judge for international pizza culinary competitions in Las Vegas, Italy and France, and a partner with Diana’s Cucina & Lounge in Winnipeg. In addition to creating award-winning recipes, Diana is a consultant to other pizzeria owner/operators in menu development, creating systems to run a pizzeria on autopilot, along with marketing and positioning to help operators grow their business effectively and strategically. She is available for consulting on a limited basis, for more information contact her at diana@dianascucinaandlounge.com
Print this page