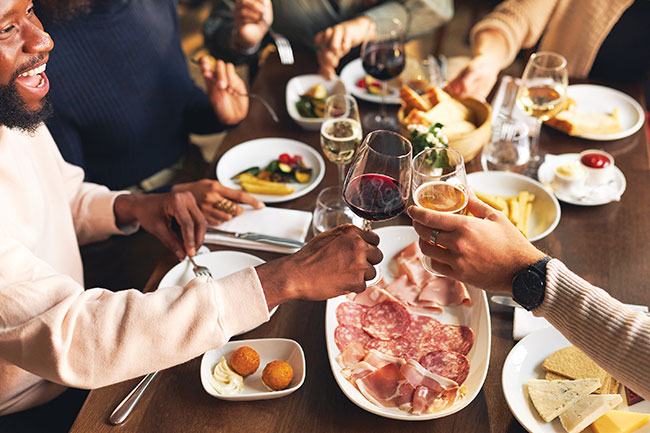 Our dine-in spaces have become inhospitable to some of the very people who have supported our businesses for years. Photo: Southworks / adobe stock

1. Freedom to operate our businesses with minimal government restrictions and full transparency from all elected officials and appointed health officials

I don’t know about the rest of you, but when I opened my space for dine-in guests, it was with the intention of welcoming all who wished to patronize my establishment. In Howard Schultz’ autobiography, Pour Your Heart Into It, he shares his journey to create and grow Starbucks. In the book, he outlines the “third place” premise: a place in between work and home where all can gather, enjoy refreshments, have a meal and respite from the day, and converse with their families, neighbours, colleagues and others. A neutral space where patrons may come and go. This is the foundation of a café, or even a restaurant.

In 2011, when I went through the expansion of my takeout and delivery concept, I found navigating building regulations, requirements and codes very cumbersome. I was lucky to work with a good company to help, but even with their expertise, there were still hiccups with imposed layers upon layers of new regulations to comply with.

One inspector would sign off on one portion, but then another inspector, scheduled days or weeks later, had another set of regulations to oversee. Another checklist. Needless to say, the buildout took a great deal longer to complete than originally scheduled, and, even with adjustments on wants versus needs, the project went over budget. But once it was done, and we opened our doors to welcome guests, well, that seemed like it was all worth it.

Over the next several years I found many occasions where I was so grateful our space was designed with large washrooms, extra-wide doorways, and tables and chairs that were not fixed in place: we were able to host many small and large gatherings, pizza-making classes, paint nights, tasting nights and karaoke parties where we were able to accommodate as many as 30 individuals all wanting to sit together, at one very loooooong table. In addition, I was grateful to have hosted many disabled guests, their support workers and their families who would not have been able to dine in otherwise. These were the reasons we expanded into a restaurant space. To be able to do what we love to do, in a sacred space of sorts.

The past 19 months we’ve been faced with increased restrictions being forced upon all restaurant owners; where we have willingly or unwillingly become enforcers of government and appointed health officials’ ever-changing policies. We are not encouraged to question or ask for the supporting evidence behind these policies. We are punished if we defy the rules.

A fellow independent pizzeria owner in Calgary had his business, Without Papers Pizza, forcibly shut down. His crime? He welcomed everyone, as he had done for many years and as he had done in the weeks prior to restrictions being re-implemented. The owner, Jesse Johnson, has a very interesting back story: his own father, a victim of the Japanese Canadian internment camps in Canada (1942-49), had to carry papers in order to leave the camp and move about. If you aren’t familiar with this portion of our history, more than 22,000 Japanese Canadians – comprising more than 90 per cent of the total Japanese Canadian population from British Columbia – were forcibly relocated and interned in the name of national security. The majority were Canadian citizens by birth. Even though the camps were eventually closed and condemned as violations of several basic human rights, no reparations were ever made to the victims for the atrocities. Jesse named his establishment in honour of his father’s life-changing experience. The very concept meant to be welcoming and hospitable to one and all.

I had a longtime customer reach out to me a few weeks ago. He wanted to book a karaoke party at my restaurant. A celebration for his longtime friend, who is turning 65. I know both of these individuals and many of their life stories. It would be my great pleasure to host their party, having hosted a similar party for their group of friends in 2019. But I told him I couldn’t. How could I accept the responsibility when I wouldn’t able to be much of a host, instead becoming an enforcer of this celebration: no dancing, no hugging?, no people too close together, masks if they’re not eating or drinking, music kept below a certain decibel level and my team checking everyone’s papers to determine if they’re welcome to the party. Not much there for a 65th birthday party vibe.

Heaven forbid my team or I don’t enforce the rules accordingly and receive a $5K fine. Not to mention any new restrictions that may be mandated in between booking the party and hosting it.

Many veteran operators have had our spaces for over a decade. We’ve encountered different public health issues and somehow we’ve managed to still operate relatively freely without needing to restrict our guests in any way. That is, we could welcome our patrons as we deemed appropriate.

Our dine-in spaces have become inhospitable to some of the very people who have supported our businesses for years. They are now spaces that are unwelcoming to some of the very talented individuals who prep, cook and bake the very meals served in the dine-in areas. Meanwhile, we sometimes see pictures of maskless elected officials on social media, in social situations, seemingly behaving contrary to the very mandates they’ve set out for us to impose on our guests.

Elected and appointed officials, and even media must be held accountable to their responsibilities to serve the living men and women of the land. Not the other way around.

2. Peace on Earth and goodwill towards all

I was brought up believing that Canada was truly the place where all may come together with mutual respect for independence, freedom of religion, speech, assembly and association, and freedom of the press. Where we all live in relative peace as we each endeavour to lead our own fulfilled lives – whatever that looks like. Where family means not only blood relations. Where diversity only makes our society stronger. Where we’ve learned from atrocities and injustices from our collective past, and mutually agreed upon holding ourselves to the principles in our Canadian Bill of Rights and our Canadian Charter of Rights and Freedoms.

“I am Canadian, a free Canadian, free to speak without fear, free to worship God in my own way, free to stand for what I think right, free to oppose what I believe wrong, free to choose who shall govern my country. This heritage of freedom I pledge to uphold for myself and all mankind.” –The Right Honourable John G. Diefenbaker, Prime Minister of Canada, House of Commons Debates, July 1, 1960. | CP