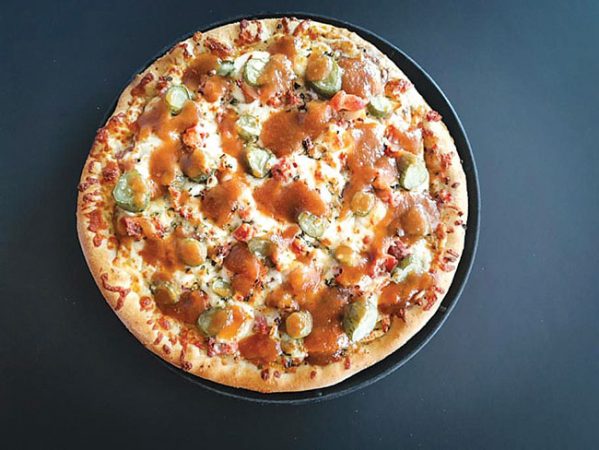 Move over pineapple. Pickles are here.

In recent months there has been a new ingredient erupting onto pizzas everywhere. If you haven’t seen it in your neck of the woods, maybe you should be the first to add it to your menu! What am I talking about? No, not Fruit Loops. I’m talking about pickles! Yes, it seems that while pineapple on pizza has been used to divide us into camps, now we can argue about pickles on pizza.

It might not come as a surprise to some that I’ve had designer pizzas and flatbreads with pickles on my menu going back to 2015. I created a flatbread I called “Farmer’s Dawg” featuring our locally sourced gluten-, dairy- and nitrate-free farmer’s sausage; olive oil and herbs sauce; garlic-and-chives Havarti; spicy Italian-style pickles and Dijon mustard on top. In this case, the pickles are raw and topped after the flatbread is fully baked. This phenomenal pizza pairs well with our Pinot Grigio and also most of the craft beers that we carry.

Last year, I also created a weird specialty pizza that I called “Consent Fries with a pickle” featuring our olive oil and herbs sauce, seasoned french fries, gravy, farmer’s sausage, strip bacon, mozzarella, cheese curds, garlic-and-chives Havarti cheeses, dill pickles, and more gravy on top. It was well received by my regulars, and also by my own family.

A quick search reveals a few interesting pickle pizzas made by home chefs. The most popular ones are simple pizzas with a creamy garlic-based pizza sauce, pickles and mozzarella. Some have bacon, and some suggested ranch dressing on the side for dip.

From test kitchen to menu
Recently a good friend and I played around with a few different styles of pickles: dill, spicy, bread-and-butter, extra garlic and a bunch of other ingredients. We dressed some of the dill pickles up with a beer-battered, breaded topping sprinkled with dill, then fried them. Then we used them on a pizza with other toppings. We especially enjoyed those ones: crunchy, salty, with a nice bite to them on the pizza. My friend made a specialty pizza with dill dressing as the sauce base, breaded pickles, mozzarella and dill weed sprinkled on top.

A couple of my favourite creations from that day – now on my menu – are “Sweet’n’Spicy Pickle” with olive oil and herbs sauce, dill pickles, farmer’s sausage, jalapenos, mozzarella and Cheddar cheeses with a drizzle of honey on top. The name says it all.

Another one that I’m calling “Pickle BLT” featuring my new dill pickle pizza crust as a flatbread, a drizzle of olive oil and sea salt, mozzarella and cheddar cheeses, strip bacon, grape tomatoes and dill pickles. After it’s baked we drizzle it with ranch dressing and top it with fresh romaine lettuce. I sampled this one with my pickle-loving neighbours and it received rave reviews. It is well suited to spring, summer and beautiful patio weather.

Other meat toppings that we thought paired very well with dill pickles are capicola ham, pepperoni, corned beef, salami, chicken, and chorizo sausage. The cheeses that we thought were especially good were a medium sharp cheddar, garlic-and-chives Havarti and Monterey Jack. If you’re looking to spruce up your menu this spring, I highly recommend you try pickles out, as a topping, and see how well received they are in your market.

Lastly, we were inspired to make a dill pickle pizza dough: one with dill weed only, and one with both dill weed and dill pickles. We didn’t know what to expect, so we made only a small batch. I went with a 55 per cent hydration and then we let the dough cold ferment for 24 hours. We baked them up the next day to taste-test. I made the double dill pickle pizza dough into a simple focaccia, drizzled it with olive oil and a sprinkle of sea salt. I wanted to taste the dough just on its own, and it was super awesomesauce! It baked up crispy and light, and you could taste both the dill weed and the pickles in the crust.

I baked the second single dill weed dough as a half-and-half pizza: half just Monterey Jack and mozzarella cheeses and half with pepperoni. It paired very well as the base crust, again: light and crispy on the outside and soft bread on the inside.

Both crusts were quite nice, but my favourite was the one that had both dill weed and dill pickles. As it is with many of my weird creations, I decided to put it on my menu at Diana’s Cucina. My friend and I, our families and our taste testers really enjoyed it, but you never know if it will sell – until you put it on the menu. We launched it the third week in March. We’ll see what happens.

If this column has inspired you to add dill pickles to your pizza menu, drop me an email and let me know. I’d love to hear from you. Until next issue, be well and be kind.