The life of Pi 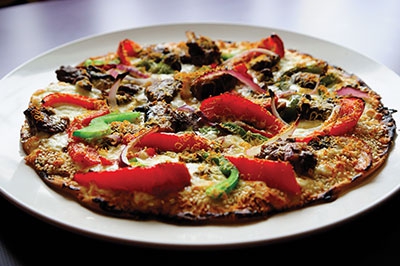 The Wok pizza has a sesame seed crust with a teriyaki base. It is topped with shaved steak, green peppers, red onion, Portobello mushrooms and cheese.

Meghan O’Dea didn’t intend to create a pizzeria with a mathematical theme when she founded Pi Gourmet Eatery in 2008 in her hometown of St. John’s, N.L.

Meghan O’Dea didn’t intend to create a pizzeria with a mathematical theme when she founded Pi Gourmet Eatery in 2008 in her hometown of St. John’s, N.L.

She says she and (silent) partner Dave Hopley just drew up lists of names for the establishment and somehow it evolved into Pi.

“After we chose a name, we then decided to have numbers running around the restaurant [to reflect Pi’s endless numerical sequence] and name most of our pizzas after mathematicians,” she recalls.

With pizza names like Pythagoras, Fibonacci and Pascal, the theme caught on with local mathematicians, math groups and tourists, alike.

“It works,” says O’Dea, 36, who admits she wasn’t much of a “mathlete” in school. “We are now known for our math-themed restaurant. I didn’t realize how popular math was until I opened.”

But the clever marketing aside, Pi has also become a favourite among St. John’s locals for the niche it has carved out for itself: a gourmet pizzeria with authentic Neapolitan-style pizza that caters to a variety of palates.

YEARS IN THE MAKING
O’Dea dreamt for years about opening her own establishment, having been around foodies – and restaurants – her whole life.

“All of my family is pretty much into food, but none are chefs per se,” says O’Dea. “We all grow our own herbs, vegetables and fruits in our gardens, as we did growing up. And I’ve been cooking for years.”

After cooking in a few eateries abroad and in some of the most popular restaurants in St. John’s, she decided to take a course in food and beverage management and open her own place. She had one other restaurant (part bakery/part pizzeria) before opening Pi with Hopley.

They modelled the venue after Hopley’s funky living room, complete with lime green and cherry red hues, and eclectic prints and photos that range from Mickey Mouse to Hank Williams to Godzilla. After they gave their pizzas some pretty original names (care for an Archimedes, anyone?), they covered the room in numbers and Pi Gourmet Eatery was born.

ENDLESS OPTIONS
“We serve really unique pizzas,” notes O’Dea, and one look at their menu certainly backs that up. Take, for example, one of Pi’s most popular pizzas, the Fibonacci, which has a roasted garlic and olive oil base and is topped with a compote of caramelized pear and red onion braised in port, baby greens, toasted walnuts and Gouda cheese. Then there is the Sir Isaac Salmon, a pie with a sun-dried tomato and avocado cream cheese base and toppings of smoked salmon, sweet potatoes, red onion, fresh tomatoes and feta and Italian cheeses.

The restaurant boasts 21 different pizzas, nine different bases and about 45 toppings – everything from classic fare like pepperoni, mushrooms and green peppers to gourmet goods such as artichoke hearts, avocado and grilled asparagus. And then there are the toppings that you rarely see elsewhere, such as toasted almonds, red grapes and sesame seeds.

“I’m surprised, but they go over quite well,” notes O’Dea of the more atypical toppings. Unusual pizza combos like her Wok pizza (a sesame seed crust with a teriyaki base topped with shaved steak, green peppers, red onion, Portobello mushrooms and Italian blend and parmesan cheeses), have even become fan favourites.

O’Dea believes creativity is important in a pizzeria. She competed at the International Pizza Expo in Las Vegas earlier this year and picked up the top prize in her division (non-traditional) for a mint, lemon balm and pesto pizza with fresh mozzarella. That pizza is now on her menu and is dubbed “The Vegas Special.”

To foster creativity in her pizzeria, she holds a contest for her staff that takes place every summer. Each staff member (there are currently nine plus O’Dea) creates a pizza that customers enjoy during the warmer months. Whoever sells the most of their special pizza receives $500 and gets the honour of seeing it on the Pi menu.

HEALTHY OPTIONS
In addition to Pi’s unique and sometimes unorthodox flavour combinations, the restaurant really stands out for its food options for people with various allergies or health concerns.

“We do gluten-free pizza, vegan pizza and accommodate people with all kinds of dietary restrictions, like lactose intolerance,” O’Dea notes. “Where we are located in Newfoundland, there isn’t a lot for people who have dietary restrictions. I have a lot of people who come in here and say they haven’t eaten pizza in 20 years and are really thankful. If someone wants something, I’ll pretty much just give it to them.”

That flexibility has the funky digs hopping most of the time. Pi seats about 45 people at full capacity, and they do takeout (pizzas, crusts and dough) as well. “I love it,” says O’Dea, who says her staff is as close as family. “We have fun and we work hard.”

O’Dea spends time on the floor, time in the kitchen – and even creates most of the restaurant’s desserts (everything from a warm gingerbread pudding cake with hot rum sauce to a dense cocoa cake with a chocolate-Kahlua ganache). Unfortunately, an allergy she acquired of late has her spending less time baking than she’d like.

“I have developed an allergy in the last four or five years to flour – the bleaching agent in flour – so I’ve slowed down my desserts and I’ve bought some,” she notes.

O’Dea tells a funny story about learning about her allergies. Her doctor told her to close down her restaurant or she’d always suffer from terrible allergic reactions. When O’Dea said she’d never shut down Pi, her doctor’s eyes widened.

“The doctor said: ‘You own Pi? That’s my favourite restaurant. You can’t close it down,’” laughs O’Dea, who noted that the doctor then set to work on helping her figure out how to deal with her situation.

MOVING FORWARD
Many people have suggested that O’Dea open a few more restaurants like Pi, but she isn’t entirely convinced. She worries about the workload – and the quality of the food – should that ever happen.

“People have said: ‘Meg, you should really open one of these in Ottawa or Toronto or wherever.’ But I think that the reason Pi is so good is because I’m always there. I’m a workaholic and work seven days a week, roughly 12 hours a day. I live upstairs, so I pretty much do not leave the building unless it’s to take my dog for a walk.”

Yet, she isn’t completely ruling out opening another restaurant some day, even if it means a lot more work for her. “It could be an option,” she notes. “But this is my little baby, and it’s really all I think about.”

And with the crowds she sees day in and day out, O’Dea seems to have worked out the perfect algorithm for success with her beloved Pi.