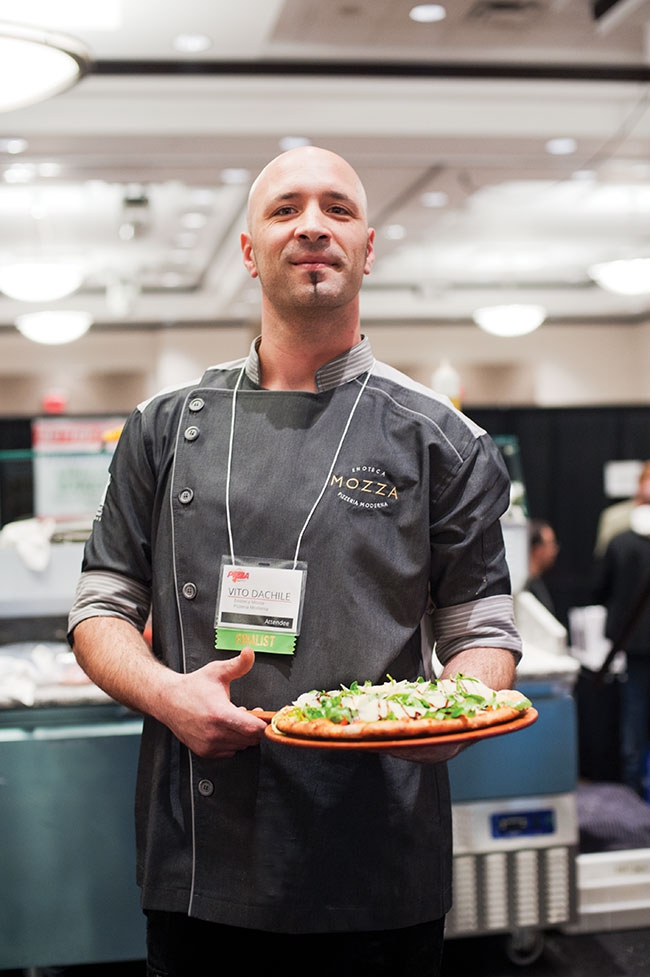 Our 2015 Canadian Pizza Chef of the Year runner-up, Vito Dachille of Enoteca Monza Pizzeria Moderna in Laval, Que., said he really enjoyed his first taste of competing in the International Pizza Challenge at Pizza Expo in March. From the seemingly permanent smile on his face, it’s not likely he was exaggerating.

Before sitting down to chat with Canadian Pizza, Vito and his Enoteca team, Raffaele “Butch” Mercuri and Alfredo Pellechia enjoyed visiting with Chef of the Year Carlo Raillo and wife Kayla Wyntjes at our booth at the end of the first day of competition while waiting on tenterhooks for the results.

Encouraged to compete for the Canadian title at the Canadian Pizza Show last October by his boss, Enoteca co-owner Raffaele Mercuri, Vito agreed to throw his chef hat into the ring.

Mercuri, along with co-owners David Alter, Michael Gutfeld and François Pereira, owns the popular Quebec restaurant, which has two locations in Laval and on the West Island and plans to open a third location this spring in downtown Montreal.

Because he competed in the Traditional category in Las Vegas, he changed up his pizza to The Calabrese, inspired by his boss’s home region of Calabria in Italy. The Calabria has a very thin crust, he said – thinner than that of most Neapolitan pizzas.

He handled himself like a pro in the Traditional preliminaries of the challenge, creating a dreamy pizza that featured nduja, a Calabrian sausage, and caramelized Tropea onions, a variety well loved in the region. Although he did not make the stiff cut to four pizzaiolos who advanced to the finals, he was happy with his pizza and smiling throughout the process.

Vito, who has worked in the Laval location since April 2012, came to Canada from Bari, the capital city of the province of Bari and of the Apulia (in Italian, Puglia) region six years ago.

He met his wife Rosa in Italy and the couple decided to return to Canada together, settling in Montreal.

He started baking in 1998, but he credits a good friend from Montreal with jumpstarting his career by asking him to lend him a hand, and from there he kept learning,. “I really have to say thanks for that,” he said.

When asked what is most important to him about making pizza, Vito said, quality is paramount, the smile disappearing temporarily for some serious pizza talk. You must use the best ingredients, he said.

The restaurant produces 2,800 or so pizzas every week and employs three people in the pizza area and 10 people in the main kitchen, Vito said. What’s it like working in such a busy restaurant?

You have to just work away and not be distracted by the noise and activity going on around you, he said. “You can’t get scared,” he added.

Co-ordination is important because you have to know which pizzas to make at which times. Also, the timing is important, for example, when cooking filet mignon, which takes about 20 minutes

Enoteca serves other foods, but is essentially a pizzeria, targets customers in all age groups. It offers a pizza of the day for lunch from 12 to 3 only and not on the regular menu. This allows Vito and the other chefs to flex their creativity.

Always one to try new things, Vito said he often looks no further than the refrigerator to find inspiration. He likes to keep up on new techniques as well.

Though nervous competing in his first contest in October he has since learned to embrace the fun aspects of competing.

“You need a competition to prove yourself. It’s fun. You see other ideas from other people,” he said.

Vito’s hobbies include spending time with his wife and son and taking walks. They live close to the restaurant in Laval.

His advice for those looking at getting into his chosen career is “Don’t be afraid of work, don’t stress. “Take it with a smile, and just go!”

Pizza Cotto
Here is the combination that made Vito Dachille runner-up for Canadian Pizza Chef of the Year.