Features In the Kitchen Recipes
The Di Marco, signature pizza of La Pizzaio 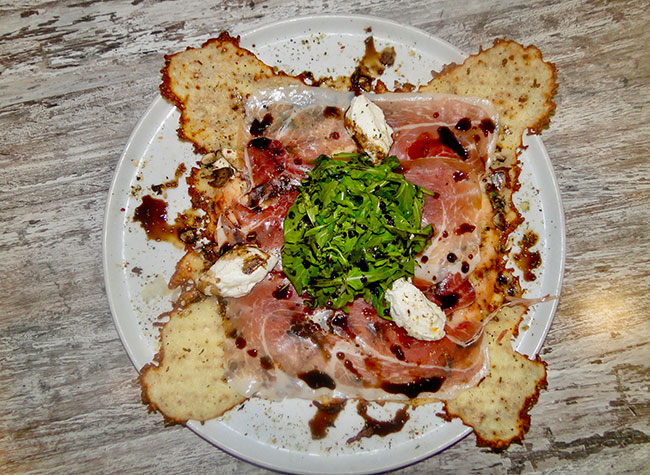 La Pizzaio has been operating in Quebec City for more than 30 years. Marco-Christian Gallegos and Gina Salvatori took over the pizzeria seven years ago. They like its location in downtown Quebec City near the train and bus stations because it announces to customers that this isn’t a tourist trap but an established pizzeria.

While the new owners kept the name, they changed the recipes and many aspects of the pizzeria. It is a cosy 22-seat spot where they take customer satisfaction very seriously.

“There are a lot of restaurants in Quebec,” Gallegos says. “It’s a big responsibility if people choose our restaurant.”

“We are smaller, we do not overbook and we want guests to have a good time,” he says. “No pretension with a lot of attention,” he adds, quoting one regular visitor’s description of La Pizzaio.

He counts people of all ages, tourists and tourists who return occasionally but regularly among their customers. “It’s important to us to have not just customers but friends,” he says. “It is a business but it is a passion also. People feel that.”

CHEESE
La Pizzaio’s centrepiece is an electric oven with an inch-and-a-half stone that can six pizzas at the same temperature. Their approach to the dough can be summed up as “less dough, more flavour.” They use a low-fat cheese (15 per cent) and spread the cheese to the edges of the crust so that it in effect becomes the crust. The reduced fat content ensures it’s crispy on the edge.

The Di Marco, the white fat of the prosciutto prevents it from being overcooked. “You want just the right balance of tastes,” Gallegos says. “Less cooking means less salt.”

Di Marco gets great reviews, he says. Visitors on Trip Advisor have noted with approval the tortilla-like crust and crispy cheese edges.

“We like to tell people we’re not an Italian restaurant – we’re a pizzeria!” he says, noting their slogan is “Pizzeria Unique.”

Gallegos, who has worked in restaurant and food service since age 16, has a background in wine sales. He keeps a selection of about a dozen reds and a dozen whites plus rosés in the summer, and most are private imports. Another specialty is that every night they serve a small, original mise en bouche such as bruschetta. “We don’t advertise,” the chef says. “My advertising is what I serve. We really try to focus on the details. That is something you can afford to do on a small scale. It doesn’t’ take much time but it makes a big impression.”

Di Marco was featured in About the Pizza, a special digital edition published by Canadian Pizza in 2019.