When Baska Nagalingham left his war-torn country of Sri
Lanka for a new life in Canada, little did he know that making dough
would take on a whole new meaning. 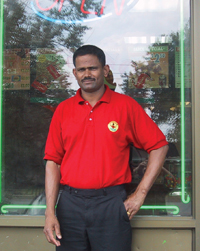 When Baska Nagalingham left his war-torn country of Sri Lanka for a new life in Canada, little did he know that making dough would take on a whole new meaning.  At the age of 23, with no immediate relatives and only a rudimentary knowledge of English, Nagalingham immigrated to Canada to begin a new life.

Fast-forward 18 years: Nagalingham, now 41, is married (to Jeya whom he sponsored from his home country) and has two daughters, 11 and 7, and is the owner/operator of Reginos Pizza in Thornhill, Ont.  Here is where we pick up on a true Canadian success story.

A large contingent of Sri Lankan immigrants already worked in the kitchen and Nagalingham felt at home amid the familiar tones of his native dialect. He started as a dough master and cook, with industry experience, and an ESL course, Nagalingham gained the communication skills needed to move out of the kitchen and into the dining room where he became a waiter and a manager.

“He had a lot of drive, determination and perseverance. He was observant and wanted to know everything,” recalls Jordan Kruger, then-assistant manager at Pizza Hut. “He was extremely perceptive.”

“He was very proud. Getting his citizenship meant so much to him and everyone around him. I could tell it was very important to him.”

Nagalingham’s climb to success was steady, due in large part to his strong work ethic and hunger to succeed. Within two years he was closing the restaurant for the night manager and within three was full time shift manager.

Although happy with Pizza Hut, by 2005, Nagalingham was looking to become his own boss. While searching for a restaurant franchise opportunity, he discovered the Clark Avenue Reginos Pizza franchise. He saw several other restaurants in the region, but settled on the Thornhill location, which was close to his home in Aurora, and right beside a school, which represented unlimited customer potential.

Reginos sits in a worn-out strip mall at the end of a nondescript residential street. Before Nagalingham’s arrival, the franchise was not profitable and run as a “mom and pop” operation by the owners. The store catered to students from the local school and the families living on the street.

Nagalingham bought the struggling franchise, hoping to turn a profit while cementing his role in the community.  Since taking over the operation two years ago, Nagalingham has turned the business completely around. The profit margin has grown by a whopping 70 per cent and the once floundering Reginos is now a thriving operation, with five full-time in store employees and two full-time drivers. He has expanded the menu to include deep fried chicken wings, burgers, poutine, and lasagna and garlic bread.

A large part of his customer base is made up of repeat business. He has a great rapport with his clientele often offering free drinks to his customers and calling them by name. Some clients order at least once a week and are part of their daily lives.

Nagalingham is also renovating the store. He wants to expand the counter space to make ordering easier, clean the interior to make it more inviting and install a state-of-the-art oven, which cooks product faster and more efficiently.

To continue to allow his business to grow, Nagalingham has created a mobile catering arm to his business, selling his product offsite at various weekend events, such as the Rodeo at the Markham fairgrounds. The three-day event was highly profitable. He also caters school functions and is planning on expanding his mobile business into hockey arenas, golf courses and at various local sporting events.

Offsite catering has created the perfect storm for Nagalingham: increased profits, increased brand exposure and, more subtle but equally as important, further entrenching the Reginos franchise as a staple of the community.

As he says, “I wanted to be able to bring my food to the people so it was easier for them to enjoy it.”
Much like the pizza dough that Nagalingham has made every day for the past 18 years, there is a three-step recipe for his success: understand your audience, gain their trust and broaden the consumer base by selling off-premises.

The secret ingredient? “Keep believing and you will make it, “advises Nagalingham in a fatherly way. “You can be successful, if you are willing to put the time in and work hard.” •