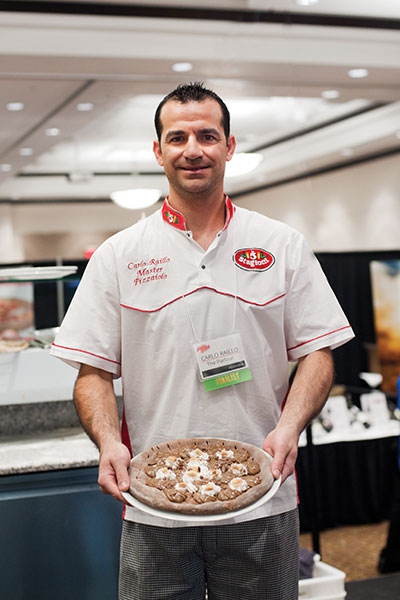 Carlo Raillo successfully defended his title of Canadian Pizza Chef of the Year title for the second time – and he didn’t pull it off by playing it safe.

Carlo Raillo successfully defended his title of Canadian Pizza Chef of the Year title for the second time – and he didn’t pull it off by playing it safe.

The head pizza chef at The Parlour Italian Kitchen & Bar in Edmonton wowed judges at the Toronto competition and show in October with his Cappuccino Pizza featuring a cocoa powder-infused classic Neapolitan dough and a dreamy combination of coffee pastry cream, caramel chocolate chips, salted almond streusel and rosettes of whipped cream.

Canadian Pizza spoke with Carlo and his wife, Kayla, at their Edmonton home in November, the contagious giggles of young daughters Haley and Julia echoing in the background. They shared their impressions of the recent show, the pizza champ’s competitive experience and, of course, the finer points of what goes into a dessert pizza.

Carlo competed last year at Pizza Expo in Las Vegas in a guaranteed spot in the Non-Traditional finals of the International Pizza Challenge as part of his prize for Chef of the Year. There he presented his “Hangover” breakfast pie, which was added to The Parlour’s menu last May and is still very popular.

This year he switched it up by creating a dessert pizza.

Carlo’s entry description reveals the motivation behind his recipe choice: “This sweet pizza comes from the desire to combine two typical Italian products that are known throughout the world: Pizza Napoletana and Cappuccino.”

“This pizza would be a good idea to put on a dessert menu for those who don’t drink coffee but enjoy the flavour of coffee,” it continues, adding that it is ideal for sharing with a group.

“He says he wanted to cover all edges of the menu, so that, if you just wanted to be a pizzeria, you could be open from breakfast until late in the evening,” says Kayla, helping to translate some of Carlo’s more complex responses to English from his mother tongue Italian.

The crowd-pleasing Cappuccino Pizza was slated to go onto The Parlour’s menu in November.

In March the master pizzaiolo will compete for the fourth time at Expo, and he says this experience gave him a bit of an advantage in Toronto. Carlo says he enjoyed competing at the Canadian Pizza Show because making pizza in front of a crowd of people feeds his energy and pushes him to perform to his potential.

He also liked hearing the audience’s surprise when he put his crust in the oven with no ingredients on it, he says, and when he took it out, “everyone was wondering why it was brown.”

He enjoyed sharing ideas with people from other pizzerias in Canada, and he especially loved seeing the judges’ faces when they bit into his pizza. One judge’s reaction: “Oh my God.”

But to get back to the pie: Carlo had wanted to make a cocoa dough since seeing a Naples pizzaiolo use cocoa in his crust, and he had tried it a few times. Ever the perfectionist, he aimed to master the technique. His friend Keoma Franceschi, who attended cooking school in Italy, gave Carlo pointers on making the cream.

The Cappuccino Pizza represents the Italian idea of perfection: marrying coffee and pizza, he says. He experimented, combining the cocoa dough with a few different elements – among them marmalade and caramel whipping cream with caramelized bananas – before settling on cappuccino as the favourite.

Carlo says he likes to lower the salt and make the dough a little sweeter without straying too far from traditional pizza dough. He wants people to know it’s “a pizza they are eating and not a pastry,” says Kayla, translating. “Ninety-nine per cent of what goes into a dessert pizza is what goes into his regular dough – just switching salty and sweet.”

Having learned some of the method for making cream from his father, who runs a pizzeria in Italy, Carlo says he enjoyed working with pastry. But he wanted to perfect the pastry; for example, he didn’t want the coffee flavour in the topping to be bitter. He enlisted Keoma’s help, regularly driving across Edmonton for an hour so the two could co-ordinate schedules.

“Carlo won’t do anything 80 per cent of the way; he’ll do everything 100 per cent,” says Kayla in a tone that makes clear the amount of effort that goes into the chef’s work.

Carlo never stops learning. His method is to watch a technique, then investigate until he perfects it. Going to Las Vegas every year keeps him in contact with pizzaiolos he knows and admires, he says. Currently he is trying to learn about sourdough.

You have to flip it over all the time, she says: “Basically, it’s like having an extra child, from the sounds of it,” says Kayla, translating. “You have to take care of it and you use that as your yeast. You keep handing it down: it’s basically breeding your own yeast.”

Carlo says he would like to come up with a pizza anyone can eat. He is interested in entering the gluten-free category one day at Expo and to this end is constantly experimenting with a gluten-free crust.

Though open to new ideas, challenges and styles of pizza, Carlo says he prefers to make his specialty, the Neapolitan to other styles like New York or Chicago. “I make Napoletana pizza,” he says.

He was born in nearby Naples, which is where years later he met the vacationing Kayla, who hails from Red Deer, Alta. Each summer he goes back to Italy to help out in his parents’ restaurant in Tortora, Italy, as a chef and as a mentor to young workers.

“It was a good trip this year,” he says. The region had a lot of rain, so lots of people came into the restaurant. In the past, he says, Italians used to take a couple of months off each summer and vacation in the area. The restaurant is open only from late spring into the fall.

In Rome, which he says falls somewhere between the two, a deep, square pizza is popular.

This year, Carlo’s parents, Salvatore and Francesca, are coming to Edmonton for a visit. Carlo and Kayla say they will take them around to The Parlour so they can see how a Canadian pizzeria operates. Never having been out of Italy, the snow should be a novelty for them, says Kayla, who adds they also will likely visit Banff. She says they love stories of cowboys and all that goes with that lifestyle.

Carlo has trained several students in the ways of Neapolitan pizza, and four of his students are working in the industry in places as far flung as Switzerland, England and South America. He has also trained about 10 students in Edmonton at The Parlour and at Sorrentino’s, where he worked before that.

The pizza chefs he’s trained in Canada are at a level of making a basic dough, but most haven’t perfected the crust and other aspects of pizza making.

He would love to be a consultant to pizzeria operators one day. The idea would be to help people open their pizza business, determine what will work best in terms of equipment, design and layout of operations, and teach them pizzaiolo skills.

If he could teach them the secret of his winning ways, that would be a master class in itself.