Sights on the sky for Pannizza 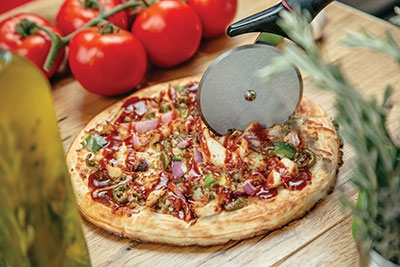 The concept operates on a pizza bake time of two minutes and 15 seconds.

Taking a new business idea from concept to grand opening in under six months is no easy feat, but the co-founders of Pannizza Restaurants had a concept that was too good to sit on.

Taking a new business idea from concept to grand opening in under six months is no easy feat, but the co-founders of Pannizza Restaurants had a concept that was too good to sit on. Derek Massad, CEO, and Terry Faulconbridge, COO, are upping the ante in Canada’s fresh-baked pizza and panini market, cooking the pies and sandwiches at lightning speed in just two minutes and 15 seconds. Their first location opened this spring in Laval, Que., and 150 more locations are either sold or in development.

Massad and Faulconbridge became friends while working at Imvescor Restaurant Group, where Massad was a brand leader and Faulconbridge held an executive position as chief procurement officer. The pair was travelling across the United States when they saw a similar pizza/panini concept and began taking notes. With over 45 years of combined experience in the restaurant industry, they knew they had a winning idea.

“We did our research in the Quebec and the Canadian market and we realized that there really wasn’t anything of its kind at all. Pizza is the second most recognizable food in the world. Sandwiches are number three, so we decided to blend a couple concepts that we saw in the United States and make it into one,” says Massad.

The idea is fresh and simple: One size, one price point per product, short bake time, and fresh ingredients. Whether customers opt for a carefully crafted signature Pannizza menu item or wish to create their own delicious concoction, the price remains the same: Paninis are $6.95, salads are $7.95 and nine-inch pizzas are $8.95. “We’re getting a lot of rave reviews from landlords, potential franchisees, existing patrons, banks; they want to do business with us because of our price points that we’re coming in at, both at the consumer level and at the franchisee level, as well as the new fresh look and new fresh concept. Our business model is adaptable to food courts, drive-thrus and street-front properties, so it’s easy for us to find good real estate to really expand our franchise network,” Massad explains.

With an emphasis on fresh, all vegetables are cut in-store by hand and there’s an assortment of quality meats including steak, two types of pepperoni, chorizo sausage and meatballs. Pannizza also offers six different cheeses including soya cheese for vegan diets as well as various types of dough, including a gluten-free option.

The panini bread is a custom-made recipe that’s baked in the same fashion as the pizza, meaning it’s never pressed or grilled like a traditional panini, instead remaining soft and fluffy. For the pizza dough, a local company was able to create a recipe that met Massad’s and Faulconbridge’s expectations. For the purpose of ease and consistency, the pizza dough is par-baked in a stone oven before it’s sent to the restaurant, where it is then baked to order.

“We still want to have a fresh product and we still want to offer the clients the baking experience with the nice smell in the store, which you get because the product is baked on site. For the franchisees, we want to make it as easy of an operation as possible. That’s why a certain amount of the process is done off-site and shipped, but it doesn’t compromise the quality whatsoever,” Massad explains.

A TurboChef conveyor oven cooking with both heat and convection air helped bring the duo’s vision for a fast bake time to life.

“When we discovered this oven it gave us the possibility to produce our store the way we wanted. Part of the challenge of any fast-casual restaurant is the time of service. We wanted to make sure we could do it as quickly as possible. Customers are amazed how fast the line goes when they’re in it. They can choose the ingredients of their product and within five minutes of choosing it’s in their hand,” says Faulconbridge.

The oven can handle 102 pizzas or 180 paninis per hour and is stackable, allowing for a second oven to be added if needed. In anticipation of high volumes, Pannizza locations will be pre-wired for a second oven so that the addition can be easily integrated.

As for the rest of Canada, Massad and Faulconbridge say they’re working on several development deals that would see locations open up across the country.

“They’re an extension of us basically,” adds Massad.

The pair has been able to generate such a tremendous response in part thanks to their previous connections, performance, and reputation within the industry.

“I was an executive at many different levels, so I’ve had a lot of exposure to many different companies and contacts. Derek was more of the entrepreneur, where he developed a chain of restaurants and had the contacts from that level, so together we both have extensive reputations in terms of dealing with franchises and developing a brand.

“When you have a network like that and you come up with something new, they tend to come to you right away because they know what you’ve done in the past and they want to be involved. When it comes to the other contacts – construction companies, banks, landlords – the same also applies. They know what we can achieve and they also want to be involved,” Faulconbridge says.

Faulconbridge left his job at Imvescor last August to focus solely on Pannizza, and Massad followed suit in September.

“It was all-consuming, but when you’re passionate you don’t mind putting in the extra hours,” explains Massad.

Just shy of six months since opening their first location, these restaurateurs are motivated by the possibility of future growth with the right partners and getting their product into as many hands as possible. “We don’t want to open just to open. We want to choose our partners strategically, both at the franchisee level and the development level. Our goal is to have a presence across the country and to continue our international extension. This product is extremely portable; we can adapt to any market,” says Massad.

If the first half of Pannizza’s inaugural year is any indication, Massad and Faulconbridge are well on their way to realizing their goal.

Julie Fitz-Gerald is a freelance writer based in Uxbridge, Ont., and a regular contributor to Canadian Pizza.
Print this page