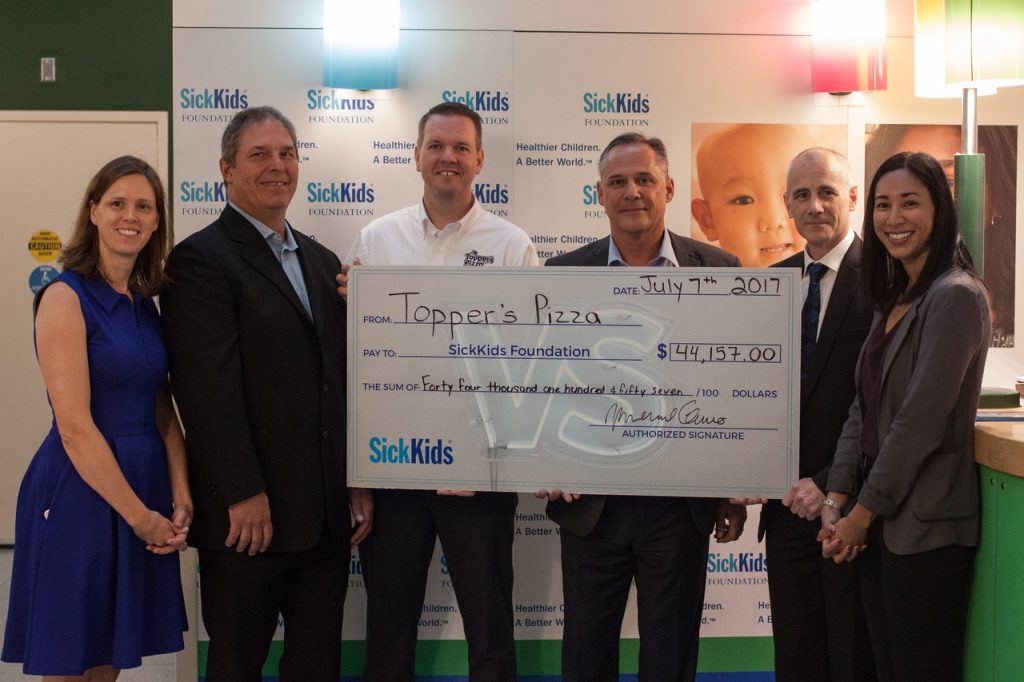 From left to right: Seanna Millar, vice-president of corporate partnerships at the Hospital for Sick Children; Kelly Toppazzini, co-CEO and owner, Topper’s Pizza; Stewart Barton, director of marketing and communications, Topper’s; Keith Toppazzini, co-owner and COO at Topper’s; Mike Clewer, president, Topper’s; and Sheryl Yip, manager of sponsorship and cause marketing at SickKids.

Toronto – The Hospital for Sick Children gave Topper’s Pizza executives a tour to thank them for their help in raising more than $200,000 for the hospital over a joint six-year campaign.

For the last six years, Topper’s Pizza has partnered with SickKids Foundation on an annual “Feel Good Meal” campaign that raises funds through customer online and in-store donations for The Hospital for Sick Children (SickKids) in Toronto.

Their efforts have now yielded a total of over $200,000, which has been allocated to highest priority needs at SickKids.

To thank them for their passion and commitment, SickKids Foundation invited Topper’s Pizza chief executive officers and executives for a donor appreciation tour on July 13, Topper’s said in a news release.

“We rely on the generous support from the community and are grateful to the ongoing commitment of Topper’s Pizza and its customers,” said Seanna Millar, senior vice-president of corporate and community partnerships for SickKids Foundation. “The funds raised from their annual initiative will help SickKids continue to fund the fight against the greatest challenges in child health. We are pleased to congratulate their entire team for reaching this fundraising milestone.”

“So many people have positive stories about SickKids, and we were thrilled that once again, our customers chose to contribute to this campaign through our 40 pizzerias across the province,” said co-CEO, Kelly Toppazzini. “We’re so proud that these fundraising dollars are able to support life-saving care, research and education provided here at SickKids.”

This year, over $44,000 was raised over a 10-week campaign across all 40 Topper’s Pizza locations in Ontario.

Customers could donate either online, by phone or in store or by ordering the Topper’s Feel Good Meal, created specifically for this campaign. Topper’s donated $2 from every “Feel Good Meal” sold, which included one large four-topping pizza and a dessert pizza.