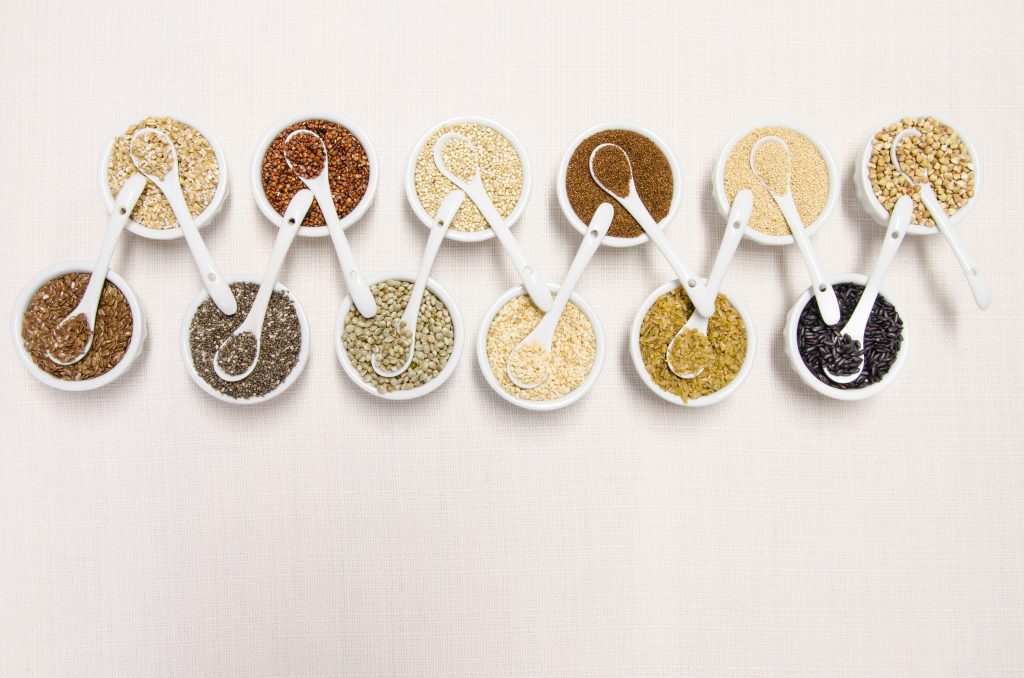 Canadian consumers are showing interest in ancient grains, seeds and pseudocereals such as buckwheat, spelt and sorghum.

Pizza chefs seem to have an endless appetite for finding ways to improve their crust. Ancient grains are getting a lot of attention in the baking world these days, and including them in your pizza crust may be one way to make your pizza rise above the crowd and appeal to customers with adventurous palates and a keen interest in nutrition.

We talked with experts about some of their favourite ancient grains. The discussion revolved around characteristics, benefits and tips to put you on the road to baking success.

Sorghum mimics structure
Sorghum appears to have it all, says Jane Dummer, a registered dietitian who collaborates and partners with the food and nutrition industry. “It’s naturally gluten-free and is packed full of fibre and protein. It’s a good source of plant protein and both soluble and insoluble fibre.”

Black sorghum boasts the most polyphenols and there is a lot of research on the combination of fibre and polyphenols and its positive effect on gut health, says Dummer, who is known as the Pod to Plate Food Consultant.

Among its different varieties is a “snow white” variety she says lends itself to pizza crust. “When people are expecting this bleached flour pizza crust, their expectations are met. What’s nice about it is that it browns up to mimic that gluten crust.”

Sorghum has a neutral taste, which she points out is a benefit to a pizzeria looking for a consistent product. “It has nutty taste, similar to that of barley but not as nutty. It’s bland so it works well in a variety of applications.”

It works best in your dough when it has an ingredient to imitate, she says. This is sometimes done using hydrocolloids, which include thickening agents such as potato starch and guar gum, and gelling agents such as pectin and carrageenan. “When making a gluten-free crust, the moisture in the process – where you add it, how you add it and if you need another ingredient – is all part of it,” she says.

If you want to know more, she suggests checking out the website www.simplysorghum.com for nutritional information, suppliers and cooking tips.

Quinoa high in fat – but it’s good fat
Although technically a seed, quinoa is another superfood that has a lot going for it. “We treat it as a grain – you cannot eat it raw like you can sesame seeds and sunflower seeds,” she says of the versatile grain wannabe, which she explores in depth in her book The Need for Seeds.

Quinoa has an excellent balance of carbohydrates, protein and fat, she says, noting it is high in antioxidants and micronutrients such as magnesium, zinc and phosphorus. It is gluten-free and nut-free. “It’s very nutritious and that’s probably what has catapulted its popularity.”

As for taste, it has an earthier, nuttier taste than sorghum.

“It makes a really nice flatbread,” she says, adding that you may want to add yeast or baking soda if you’re going for more of a traditional pizza crust.

One thing to be aware of is that quinoa has a fairly high fat (albeit “healthy” fat) content compared to wheat, she cautions. “When you’re grinding it into a flour, you need to consider that.”

Buckwheat bakes up dark
Buckwheat is a pseudocereal grain: it’s a fruit seed that is related more to rhubarb than to a grain. Like quinoa, it’s a source of micronutrients and antioxidants. And as with sorghum, you need to experiment with it in combination with other flours in order to get it to mimic the cell structure of another ingredient.

Buckwheat flour has the texture of pastry flour and gives a dark crust, she says, and as such it can be tricky to get a consistent colour to your crust.

“It is a nice vehicle for other ingredients such as mushrooms, onions and cheese.”

Spelt helps tell a story
Bryn Rawlyk, owner of the Night Oven Bakery in Saskatoon regularly uses khorasan and spelt in his bread and pizza combined with other flours such as red fife and rye. Rawlyk likes the element of story these grains add to his pizza.

“The benefit in using any heritage local grain for me is the direct relationship with the farmers who grow the grain,” he says. “Everyone loves pizza. To add in a story of where even a part of that dough came from and to give depth to the usually common food of pizza is awesome.”

Whole grains we use carry noticeable flavours, he says, adding that his staff mill their flours on site with a stone mill he built to ensure they are fresh and 100 per cent whole grain. Of the taste, he says, “They are nutty, fruity and have a richness.”

“We use red fife, spelt and rye in our pizza dough. The majority of the flour is unbleached, organic sifted white flour, with the others added. The red fife and rye are in sourdough starters we build for the dough, and the spelt is added to the flour.”

He has some advice for those starting out with ancient grains. “I would not recommend trying a 100 per cent different flour on your first go. Perhaps start with your regular recipe but sub in five to 10 per cent of total flour and go from there.”

Heritage whole-grain flour is at times unpredictable and incorporating it is tricky, he explains: “Moisture contents change. Fermentation schedules change. It is not as easy as just subbing flour for flour. A lot of testing is needed for each application. But even at 10 per cent of total flour, it would add a noticeable flavour.”

On Friday nights, Rawlyk dedicates his oven to making wood-fired pizzas for a hungry crowd who seem to agree.

Millet ideal for blending
On the supplier side, Ardent Mills manufactures a line of flour made using amaranth, buckwheat, millet, spelt, sorghum, teff and quinoa.

A staple in India and common in Africa, millet was domesticated more than 4,000 years ago from a wild, West African grass, says Elaine O’Doherty, marketing manager for Ardent Mills Canada. “Millet’s nutrients include the B vitamins – thiamin, riboflavin, niacin, pantothenic acid, B6 and folic acid – along with a number of other important nutrients. It’s also gluten-free.”

“Millet is a small, pale yellow, round grain with a mild flavour that’s ideal for blending with the flours of other grains,” she says.

Teff tiny and sweet
Teff is a tiny, ivory-coloured grain with a slightly sweet, molasses-like flavour that’s compatible with other grain flours, she says. Originally the foundation of the Ethiopian diet, teff is widely used throughout Africa in sourdough breads such as injera but is now making waves worldwide as a notable source of calcium and magnesium, she explains.

“Also gluten-free, its nutty, almost chocolaty notes can stand up to strong, aromatic ingredients like cumin, coriander, garlic, mint, curry and lamb,” she adds, noting that honey also helps the earthy flavours of the grain come through.

Amaranth has high-quality protein
Amaranth is a very small, light-coloured grain with an appealingly peppery flavour, O’Doherty says. Native to the Americas and prized by the Aztec civilization, it is a dietary staple as well as a revered symbol of the culture. Amaranth protein quality is among the highest with respect to other grains. It has comparatively more calcium and iron than other grains and is gluten-free.

O’Doherty sees a lot of potential for all ancient grains in baked goods and pizza dough. The granular appearance, mouth feel, and perceived nutritional benefits can add new twists, she says. She says the company’s line of flour works well in most dough applications and may help boost whole-grain nutrition and fibre. The flours are available in a variety of forms, including custom multigrain blends, mixes and our gluten-free, all-purpose, 51 per cent whole multigrain flour blend. “We find that customers like the flexibility we have in developing custom multigrain, gluten-free blends. We also develop and produce coarse blends with the entire grain or particulates, depending on what the customer prefers,” she says.

“These grain inclusions can make the mixing process difficult and lead to some dough tearing and unwanted yield loss,” Marciani says. “Mitigating tearing is a matter of finding the right flour with proper levels of protein and correcting dough absorption to reflect the changes in the grain.”

A small seed, like teff is a good choice, he says, because it’s fine, smooth and delivers great “piece identity” to the dough, he says.

“Experimenting with the mesh size of whole-grain flour is another way to change up the look of your bread or pizza crust,” the chef explains. “With any baking, you have to pay attention to mixing times, dough temperature, absorption and the effects other ingredients have whenever you begin to make changes. White wheat flour keeps the dough lighter than when you incorporate red wheat, so it’s often a better choice for the base flour; and this is usually followed by a one to two per cent increase in liquid content.”

“Getting a dependable pizza dough that you know is going to bake the way you’d like, day in and day out, takes a lot of due diligence,”he says.

For all of the challenges associated with ancient grains, it’s clear that when you hit on a winning formulation, you can draw in customers looking for interesting new flavours and textures – and a nutritional boost ­– in their pizza.