A well-written menu is a profitable one

Christine Emerson, a member of the International Caterers Association and a menu-writing aficionado, is on a crusade.

A well-written menu is a profitable one 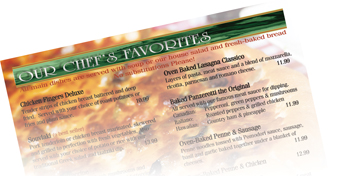 Christine Emerson, a member of the International Caterers Association and a menu-writing aficionado, is on a crusade. Her aim is to rid the foodservice industry of poorly written menus: to save operators from a lifetime of lost sales due to “cheesy” word choices and lacklustre prose.

She recently brought her campaign to Toronto where she presented What’s in a Name, a menu-writing seminar for restaurant and foodservice operators. Emerson rhymed off a list of her favourite menu words; some she described as trendy, others as mouthwatering, and some even as the “sexiest” of menu terms. She also warned operators that there are some less-appealing, what she called, “skin crawling, teeth cringing,” red flag words (and some ingredients) that should almost always be avoided … “almost” being the operative word.

You see, Emerson may be as finicky as the pickiest of restaurant patrons when it comes to menu lingo, but she made a good point when she said the goal is to write menu descriptions that work to solidify the operation’s overall concept.

She might not be particularly fond of the words, “cheesy” and “yummy,” but it doesn’t mean they’re not right to use in some establishments. Whether the writer is a hired professional or a chef-turned-linguist, they must have a solid understanding of the restaurant’s targeted customer base.

Mike Ferraro and his brother Joe are the co-owners of Ferraro 502, a full-service pizzeria in Toronto. They wrote their pizza menu with one thing in mind: demographics. Because their neighbourhood is made up of mostly families, they tailored their menu accordingly. Hence, the ravioli for the youngsters and signatures pies for mom and dad.

“What I would suggest to pizza operators is to keep the menu small, because you want to create a menu that moves,” said Ferraro.

Most of the pizza ingredients at Ferraro 502 are also found in their pastas, and even some salads, eliminating waste and maximizing the ingredients they already have. Keeping food costs low is one thing, he said, getting customers to buy is another.

You can’t underestimate the power of the written word and its influence on purchasing decisions. Ferraro says using specific descriptors like, “sliced sausage,” lets the customer know they’re getting “real sausage,” and not the “ground stuff.”
Menu writing is kind of like preparing a dish – sometimes presentation is as important as the food itself. If the customer perceives the dish as being worth more, they are more likely to pay a higher price for it. Hyping up the perception of a menu item in just a few sentences is no easy task. In fact, there are two schools of thought on the subject of whether menu descriptions should contain a lot of detail or just a little. And again, it all depends on the type of establishment.

Some experts, like Emily Arnoult of the National Restaurant Association, say that when it comes to writing a menu description, sometimes less is actually more; that the devil is in the details. Others, like Emerson, say the creativity and detail put into a menu description reflect the care put into the food; that nothing should be left up to the imagination.

Let’s explore these two options. First, Arnoult suggests limiting descriptions to 10 words or less. The premise is that “food is all about imagination,” and that an educated wait staff should be able to fill in the gaps. This option lets the server take advantage of up-selling opportunities and direct customers to more profitable menu items. This type of ambiguous menu description is often better left for full-service and upscale dining establishments.

Secondly, there is Emerson’s theory that a customer should always know exactly what they’re getting when they order a dish. Seemingly minute details like garnishes and plate presentation might be the one thing that sells a customer on a certain dish – so, she says, don’t leave anything out.

Ferraro’s menu is based on the same philosophy. Writing a pizzeria menu is especially difficult, he said, because customers expect precise details.

“The wording we chose is very simple, clear, and to the point. There’s no surprises … what they see on the menu is what they get.”

A very specific menu means fewer headaches for the kitchen and wait staff, added Ferraro. It’s important to first decide how detailed a menu will be, especially if the clientele are likely to complain if something unexpected arrives on their plate. Consider, however, that sometimes what is left off the menu can be as important as what’s put on. For instance, some people will shy away when they see the word, “curry,” but is there another way to describe this spicy Indian dish? Likewise, the term, “deep-fried,” might scare the health-conscious consumer into playing it safe with the garden salad at $4.25, but the word, “crisp” might have them craving that seven-dollar appetizer.

The phrase, “hand-crafted” is another handy selling tool, said Emerson.

“Homemade” sounds cheap, but “hand-crafted,” “made in house,” and “made in our kitchen,” give the impression of exclusivity. She suggested using brand names for salad dressings or a dip, especially if it’s a customer favourite. And don’t leave out proper nouns if they’re going to help sell the dish: the brand of locally crafted meats and cheeses, or even the chef’s name, offer a unique quality the customers know they won’t find anywhere else.

Every day, the Ferraro brothers offer different specials that can’t be found on their menu. And it’s a great selling tool, said Ferraro. But their menu remains the same.

In the past they’ve tried changing the menu consistently, but regular customers complained when their favourite dish fell prey to the chopping block.

“From time to time you can bring in something new, but the base always has to be the same,” explained Ferraro.

Whether it’s upscale, downscale, elegant or casual, a restaurant’s menu should connect with the customers’ tastes and preferences because, in the end, it’s the customer who has the final word.•