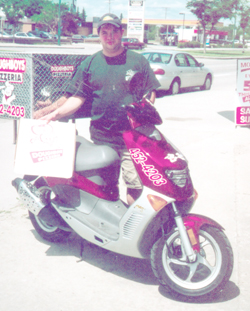 “We’ve had tons of comments about the scooters,” Mazza said of the $2,500 delivery vehicles.

Mazza said that friends suggested the scooter idea after seeing pizza delivery by scooter in Mexico. Several European cities have also keyed in on the idea. With an average cost of $2.80 to fill the scooter’s tank, the delivery service is getting about four days on the road; quite a considerable savings over other models of delivery. Mazza expects the investment in the scooters to pay off quickly. Mazza and Rossi also save the $1 an hour fuel surcharge they pay their drivers to offset the drivers’ fuel costs.

The rear-mount hot boxes can carry up to seven pizzas at a time and there is storage space under the seat for two-litre pop bottles.

Mazza said Doughboys serves about 100 pizzas a week during weekdays and as many as 600 on weekends. The pizzeria employs two to three drivers during the week and on the weekend another five or six drivers in regular delivery vehicles supplement the scooters.

Not only does delivery by scooter save a bundle on fuel costs, Mazza noted, but it also helps Doughboys stand out from the competition. He is not sure what he and Rossi will do with the scooters in the famous Winnipeg winters though. Some food for thought was the idea of delivering by snowmobile.

Mazza and Rossi opened Doughboys on Pembina Highway in south Winnipeg two years ago. In July 2004, they moved the business to a larger location across the street. Along with the takeout and delivery service, Doughboys has inside seating for 24.

Mazza and Rossi would like to open more Doughboys outlets in Winnipeg eventually, but have no specific plans yet.•