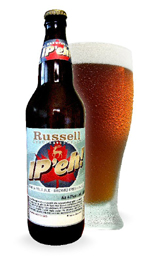 The first in the
series is a classic India Pale Ale named Russell IP'eh! It will be available in
draught and 650ml bottles for a limited time. Only 1500 bottles will available
for purchase through select specialty beer and wine stores such as Brewery
Creek, Darby's Liquor Store, Firefly Fine Wines and Ales and Liberty Wine
Merchants in Vancouver.

"Canadians love their IPA's so we chose a name that playfully pays homage
to our national affinity with this style of beer," said Andrew Harris, president,
in a news release. "The name of the beer may be cute but the taste is
seriously outstanding! Russell IP'eh is a well balanced beer with a true
symmetry of bitter and sweet. It is a first beer from our limited edition brew
master series."