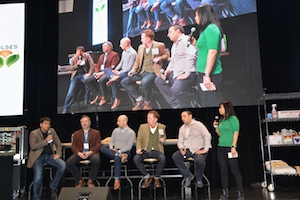 Toronto – At the Restaurants Canada Show, held in Toronto in March, an at-times intense panel weighed the pros and cons of tipping and the issues surrounding the practice.

With some restaurants like Danny Meyer in the U.S. doing away with the practice, there seems to be growing interest in coming up with alternative models. Five industry panellists offered their perspectives on the issue.

John Chetti, owner of Queen Margherita Pizza in Toronto, represented those in favour of the current tipping practice. Chetti said he gives his back-of-house staff a higher wage to offset their lack of access to tips. He said four per cent of tips go to back-of-house staff. This models allows him to attract and keep good employees.

Jamie Drummond, consultant, writer, and editor, said the current practice does not guarantee great service, suggesting the best time to improve a dining experience is before the bill is paid.

Toronto Star columnist Corey Mintz spoke for customers who are uncomfortable with gratuities. “I hate tipping,” Mintz said he always tips 20 per cent, whether the service was good or bad.

Hemant Bhagwani, who recently opened the Indian Street Food Company and operates the Amaya restaurant group, does not allow cash tipping in his restaurant. His restaurant adds 12 per cent of net sales as an administration fee to every bill and divides this among staff. He has lost a few experienced servers because of this practice but said he feels it’s important to offer an equal amount to everyone.

Bruce McAdams, assistant professor of Hospitality, Food, and Tourism Management at the University of Guelph, said he has spoken with other restaurant operators on the issue, many of whom see tipping as giving up revenue control. In McAdams’ view, however, doing away with the current model helps provide transparency and prevent the perception of some employees getting preferential treatment.

He pointed to the inequity among customers tipping by percentage highlights: one customer at a table might have a $10 meal while a companion might have a $25 meal, resulting in very different tip amounts for the same tableside service.