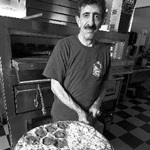 November 6, 2008 – Vancouver – Sooner rather than later you'll be thinking pizza. It's the cold making
your body crave bread and meat and melted cheese all smooshed together.

But let's make it pizza with substance, flavour and life; after all, good pizza is an affordable upgrade.

Raven
Pizza, which opened in March, will satisfy those growling pangs. The
tiny little place on Lonsdale is an offshoot of The Raven Pub on Deep
Cove Road and owner Jennifer Crawford (who runs it with husband Peter)
said the pizzas are popular at the pub so it made sense to take it
further afield.

This is mostly a take-out and delivery joint
(delivered anywhere in North Van except Deep Cove) but there are a few
window seats for sitting and eating. Raven pizza's crust is good and
the toppings, including the sauce are fresh. "We use all fresh
vegetables as opposed to frozen. A local meat supplier makes artisan
meat for us and everything's fresh. There are no short cuts," says
Jennifer Crawford. The dough for the crust, she says, "is like
mother-made bread. We mix it up, it rises like bread."

The best
seller is the Raven Special, with ham, pepperoni, salami, onions, green
peppers, mushrooms and black olives. They sell more of that than all of
the other ones combined.

They come in small, medium, and large
sizes ($15, $19 and $25) or you can create your own or purchase by the
slice ($3 per slice). While waiting for our pizzas, we were offered
some cheese sticks (cheese atop foccacia-like dough) and loved them.
You can buy a pan of them (about 16 slices) for $4. "They should be
more expensive, but they're not," says Crawford.

Meanwhile the
pizza maker was noisily crashing and banging about. I'd jump a foot in
the air as he'd throw metal pans into a pile where they crashed like
cymbals. A customer asked what was going on back there and I expected a
bear attack but pizza guy smiled. Had he attended one too many rock
concerts?