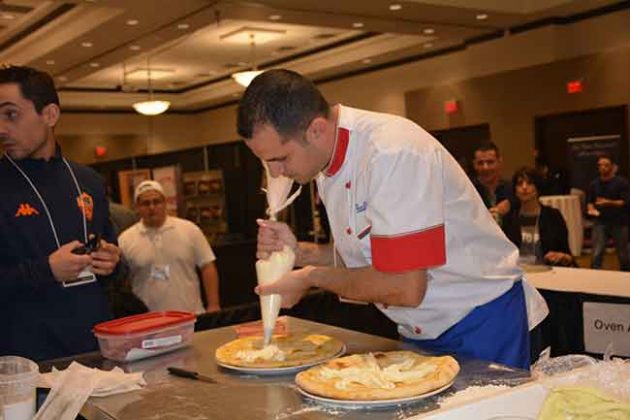 Carlo Raillo adds a finishing touch of mascarpone cheese to his Pumpkin Pie Pizza during the Canadian Pizza magazine Chef of the Year competition in October 2015.

Carlo Raillo came to Canada from Italy almost five years ago and brought with him a passion for pizza. Raillo has twice been Canadian Pizza magazine Chef of the Year, first with a breakfast pie and then with a latté-inspired dessert pizza. Last October, he won our special Champion of Champions Challenge at the 2015 Canadian Pizza Show after presenting a delightful seasonal Pumpkin Pie Pizza.

Ever the innovator, Raillo says he is intrigued to work with new ingredients such as hemp, multi-grain flour and other flavoured flours. Here he shares some of what he’s learned over 16 years in the pizza business.

Canadian Pizza: What did you find most challenging about making your award-winning Pumpkin Pie Pizza?

Carlo Raillo: It’s difficult to get the right consistency using the pumpkin since it is a moist ingredient. You don’t want to overcompensate and have a dry dough or a dough that has no flavour. It’s important to get a balance between texture and maintaining flavour.

CP: Do you get requests for specialty “clean-label” ingredients such as gluten-free, organic, hormone-free and non-GMO? How are you incorporating some of these ingredients into your dishes?

CR: The biggest thing lately is gluten-free, but when I do sample doughs like the whole-grain dough or the grano arso [smoked wheat] dough, people go crazy. Everyone wants to eat pizza and not feel guilty. So when they find a way to get those extra nutrients, they take it!

CP: What inspires you to create a pizza?

CP: Which trend do you see growing in the near future?

CR: Healthy dough options that taste great but are packed full of nutrients. I like being able to adapt pizza to different diets, such as vegan and gluten-free.

CP: What’s next? Is there an ingredient you’d like to build a pizza around?

CR: I’m excited to see if we will have ginger flour available soon. I can only imagine selling pizza not just for the love of eating pizza but also for its benefits.

Carlo Raillo adds a finishing touch of mascarpone cheese to his Pumpkin Pie Pizza during the Canadian Pizza magazine Chef of the Year competition in October 2015.

Pumpkin Pie Pizza
Carlo Raillo presented this delightful seasonal pizza to judges at our special Champion of Champions Challenge at last year’s Canadian Pizza Show. To create it, Raillo took a traditional Napoletana pizza dough and added pumpkin purée to give it a seasonal flair. The pizza is meant to be cooked in a wood-burning oven to give it an added smoky flavour, he says.

TECHNIQUE
The dough goes into the oven with just the buffalo mozzarella on top of it. A delicate mascarpone, ricotta, and boiled potato combination is then added. Next come cherry tomatoes oven-roasted with basil, followed by a salty speck to balance out the creaminess of the ricotta. To finish it off, the pizza may be garnished with a crispy zucchini strip, shaved Parmesan and a splash of balsamic glaze.
The crust is the part that will carry the most flavour from the pumpkin, but in the middle you will taste the sweetness of the cheese blend and the smoky, salty taste of the speck. The crunchy zucchini and exploding sweetness of the oven-cooked cherry tomatoes create a nice combination to appeal to the senses.

“By adding pumpkin to the dough, we are just hitting the tip of the iceberg of options, eventually offering doughs that include hemp and other grains as well,” Raillo says.