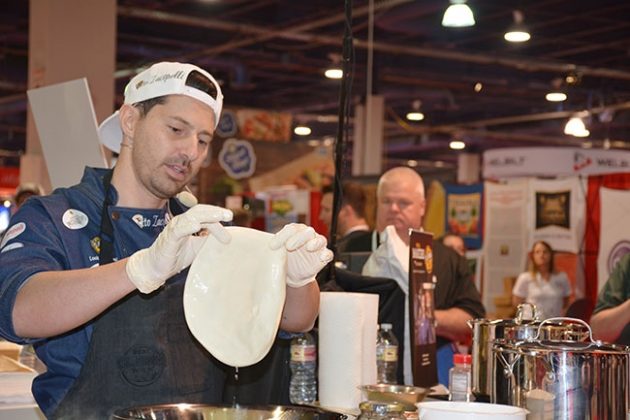 Italian chef Vito Iacopelli demonstrates how to make a mozzarella cheese crust for the low-carb crowd at the California Milk Advisory Board booth. There were lots of visitors on hand keen to taste the results.

The International Pizza Expo, held March 19-22 in Las Vegas, Nev., proved a great place to learn what pizza makers around the world are doing, which trends can translate to money for your pizzeria and what products are out there to make your work easier.

The convention centre was full of the sights, sounds and smells of the pizza industry and people: the event saw record attendance of 7,500. Canadian Pizza was there to collect tips and trends, meet Canadian operators who attended the show, and cheer on our Canadian chefs in the heated competitions.

Remo Palladini, organizer of Pizza Fest in Woodbridge, Ont., and friend Robert Billingsley, stopped by the booth to say hello, as did Rob and Karen Shortreed of Roka Woodfired Pizza in Beaumont, Alta., who were looking for ideas and products for their newly opened mobile business.

Chef of the Year Matteo Cesarotto and runnerup Giuseppe Cortinovis represented Canada well in their respective Traditional and Non-Traditional categories, Cesarotto bringing his winning wild boar sausage pizza to an appreciative wider audience. He enjoyed competing, adding that competing abroad brought with it the challenge of making the signature sausage entirely on his own. Cortinovis changed up his original entry to a pecorino-topped pie cooled with ice to slow the cooking process and make the cheese extra creamy. Always one to innovate, he cooked his pizza in a conveyor oven

A full slate of helpful seminars and demonstrations helped pizzeria operators streamline their business practices and figure out how current pizza trends can help them make more money. Here are highlights from two of those sessions.

HOW TO MAKE ROMAN PIZZA
Giulia Colmignoli and Christopher Antinucci, co-owners and operators of Napizza in San Diego, Calif., demonstrated how to make the very specialized but very versatile pizza al taglio, or Roman-style pizza. They have had success with the style and said it can boost sales for any pizzeria willing to give it a try.

Originally from Rome, Italy, the pair opened Napizza in San Diego, and now have four thriving locations. They focus on pizzas with quality ingredients and gourmet salads.

What is Roman pizza? The crust is a distinctive combination of crunchiness and airiness. The ingredients are simple: flour, yeast, salt, water and oil, but the fermentation process is what sets it apart. The dough is very wet and the flour used needs to be very high in protein. Colmignoli and Antinucci recommend 72 hours’ levitation and hydration of 80 per cent. The pair said they prefer a flour made in small batches at a cold stone mil to prevent the heat generated by most milling processes. The dough takes 72 hours to rise but “the sky is the limit” as to how much you can ferment it. It creates a gluten net (also known as a skin or shield) on top that holds the air in, creating bubbles, and the bubbles make it unique. It’s important to handle the dough carefully, not stress it too much. A gentle hand and pinching motion will help prevent cracks in the dough and keep the carbon dioxide inside.

They described the fermentation process. After 24 hours the dough will look different. You fold it to break the bubbles so it can move the sugars around. This allows it to regenerate.

Keep your hands open to let air go through the dough, they said. Press dough all around the edge of a rectangular pan, trying not to break the gluten shield. The pizza-making pair demonstrated adding their signature wavy marks in the pizza to ensure the right consistency. “It’s like painting a canvas,” Antinucci said, adding that they use their hands and not a spoon because the dough is “still alive.”

Cook the base at 600 F (check) for 15 minutes. Add cheese, then cook for 10 more minutes. One audience member, concerned the heat was escaping, called out to remind Antonucci the oven door was open, but the chef explained that briefly opening the door to let in air and start the cooling process is part of their method.

The laid-back pair shared many tips toward success. Aim for consistency, of temperature, they said. Dough should be 18-21 C in summer and 21-24 C in winter. You can achieve this by getting the water to the right temperature. That way, if the temperature outside changes or different employees prepare the pizza, the results will be consistent. Another tip: using dry yeast makes the temperature easier to control.

The Napizza owners listed several advantages to Roman dough, which when baked should be a light yellow – the colour of beer. Because this crust is structured and strong, it can hold its weight in toppings. It’s also easy to plan ahead because it is designed to sit out and be reheated for 90 seconds with each customer order. With so much water content, this crust is built to handle reheating. Each time it is reheated, it loses more water and gets crunchier. Mozzarella is added later so the pizza looks the best it can. This pizza is also good served cold, making it ideal for catering situations where you don’t have ovens.

The inviting aromas of the pair’s baking brought the audience to the stage in a rush to sample two pizzas. The red, topped with slow-cooked Bolognese sauce, is one of their bestsellers. I couldn’t resist the layered scent of the white pizza featuring a truffle béchamel base, with champignon and porcini, and topped with mozzarella and parsley. The rich taste did not disappoint. Another popular – and much lighter – combo for them is zucchini, lemon zest and ricotta, Colmignoli said.

Italian chef Vito Iacopelli demonstrates how to make a mozzarella cheese crust for the low-carb crowd at the California Milk Advisory Board booth. There were lots of visitors on hand keen to taste the results.

PROFITING FROM GLUTEN-FREE PIZZA
During afternoon seminars just off the show floor, three pizzeria operators shared their experiences with adding gluten-free pizza to their menu. Mike Rutledge of Farrelli’s Wood Fired in Tacoma, Wash.; Jeff Smokevitch of Brown Dog Pizza in Telluride, Colo., and Blue Pan in Denver, Colo.; and Eric Spata who co-owns Valeo’s in Kenosha, Wis., all have had success incorporating gluten-free pies into their pizzerias. The three industry veterans had plenty of advice on how to do it profitably. The bottom line: customers are asking for it and it’s well worth bringing in – as long as it doesn’t affect the quality of the pizza you are known for.

The “why” is a bit of a no-brainer, according to the panel, which was moderated by Jeremy White, editor of Pizza Today.Customers are asking for gluten-free pizza, and more important, they are willing to pay for it, they agreed.

Rutledge’s pizzeria has been serving gluten-free pizza for 10 years. His observations that one per cent of Americans are celiac and 25 per cent think they are celiac were met with both chuckles and vigorous nods of agreement.

“People ask for it. Why wouldn’t you?” Jeff Smokevitch said. All agreed it’s hard to gauge how much business you’d lose by not offering gluten-free.

Spata said he always asks customers if they eat gluten-free because of an allergy or as a diet preference.

Rutledge said he sells roughly 50 to 75 pizzas on a typical Tuesday night. He offers gluten-free versions of all menu items because simplifies his operation.

Preventing cross-contamination: Smokevitch recommended having a clear disclaimer – for example, identifying products but not the environment as gluten-free – and labelling products with the less strict claim of “gluten-friendly,” depending on your particular situation. Panellists said they cook their regular and GF pizzas in the same ovens, but prevent cross-contamination by brushing them out, using dedicated pans or baking on parchment paper.

Spata said his stores’s gluten-free crust touches only one stone. Like Rutledge and Smokevitch, he has a disclaimer on his menu and takes every precaution to prevent cross-contamination.

Setting up your pizzeria for gluten-free: The three shared their ideas on how to run a gluten-friendly kitchen. Smokevitch said he switched to rice flour. Rutledge assigns one person per shift to oversee the GF menu, has set up his POS system to highlight GF items and has trained staff to repeat the orders back verbally.

The decision to make your own dough from scratch, source dough from a supplier or buy ready-made crusts is one of personal preference, but each has merits and drawbacks. Rutledge does not make his own dough but sources it from outside. Smokevitch does make his own but acknowledged it’s not easy. “It’s like cake batter – hard to push out,” he said.

Whatever you decide, it’s important to factor labour into your costs, said Smokevitch, who said staff make their own dough in one location and keep the cost about the same as for ready-made, recognizing the extra time and labour involved. At another location, they source it, meaning they need to charge more to cover their costs. Charging $2-4 more than covers labour costs, he said.

On “Gluten-free Thursdays” Farelli’s does not upcharge for GF items and the promotion is worthwhile because they double their sales that night, Rutledge said. Spata agreed that upcharging is not a great source of profit but a way to cover costs. Smokevitch agreed, adding that sometimes he gets “conversions” – customers who prefer GF to regular pizzas.

One curious audience member asked if the operators ever have cross-contamination issues when they deliver? All three panellists knocked on wood while saying they hadn’t had a problem to date, but acknowledged the potential for issues in delivery situations when they lack control. Spata said that stating your disclaimer, which may include stressing yours is a certified gluten-free crust but not a certified GF environment – goes a long way toward avoiding potential issues.

Spata said he asks on social media if there is one topping or product you’d like the pizzeria to add; for example, vegan or gluten-free crust. He’s had a good response and the answers serves as trend signposts for his business. At the moment, customers are asking for low-carb crusts such as cauliflower, he said. “Low-carb, gluten-free is huge.”

Rutledge said he always tries to identify trends for the next five years and focus on a couple of favourites.

Finally, what’s in a name? Word choice can make a difference when marketing your gluten-free pies: when Rutledge changed his “vegan sauce” to “crushed tomato” (sporting the vegan symbol) he saw sales go up.

Operators in the audience also voiced concerns about their legal responsibility. Spata said if you can show your “intentionality” and that you did everything you could, that will go a long way toward relieving you of liability. “You can’t control what people put in their mouths,” he said.

The session ended with advice from the three:

Mike Rutledge: It’s all about training. Teach staff proper hand-washing techniques, make steps and processes for everything and consider undergoing LEAN certification to streamline your workflow.

Eric Spata: How you handle problems when they arise makes a difference, Spata said. Don’t allow complaints to escalate.

Speaking of alternative crusts, we found Italian chef Vito Iacopelli at the California Milk Advisory Board booth demonstrating for a fascinated attendees how to make a mozzarella cheese crust for the low-carb crowd.

After three days at this buzzing industry event, it was easy to see how learning pizza trends and techniques and swapping stories with fellow operators can refresh and profit your pizzeria.