If there was a marketing tool that could double the bottom line, would you take it? 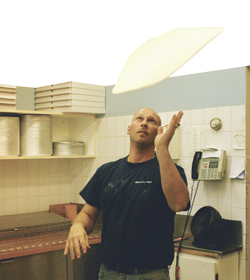 If there was a marketing tool that could double the bottom line, would you take it?

Chances are, almost every pizzeria operator in Canada would love to see that kind of return at the end of the fiscal year. And truth be told, it’s easier to accomplish than one might think.

Many of us in the industry are already familiar with the name Tony Gemignani. The six-time World Pizza Champion has graced the pages of Canadian Pizza and Pizza Today; he’s appeared on the Tony Danza Show, the Tonight Show with Jay Leno and in newspapers around the globe. In the 10 years he’s been in the world of pizza games and acrobatic tossing, Gemignani has seen his business sales go from $700,000US to over $1.4 million.

“I’ve said it before, but this has created millions of dollars in free advertising for me,” Gemignani told Canadian Pizza. “For an independent operator, that is huge. Especially when you’re competing against the big guys.”

Gemignani, coach of the World Pizza Team, has backed the efforts of Canadian Pizza Team coach Roberto Vergalito and team sponsor, Canadian Pizza magazine, in a bid to create the first national crew from the Great White North.

“This is the best recipe you can incorporate into your business that will attract a lot of publicity,” Gemignani said.

That publicity, he said, doesn’t always have to be about winning the big competition. Often, local newspapers will latch on to the human-interest story behind the competition, featuring coverage of local pizzaiolos regardless of final standings.

“Practice in the restaurant, talk to the media and let them know you’re competing.”

Coach Vergalito has been working on developing a team for some time now, and believes he can build a Canadian team that can compete on the international stage.

“This is a great opportunity to show that pizza is not just pizza … that there’s a lot of skill and showmanship to it,” Vergalito said. “It’s a real chance for (independent) pizzerias to move up and show we’re something different.”

The first three categories are the best avenue for every Canadian pizzaiolo to start competing immediately, according to Gemignani. In his experience, he has found about 95 per cent of competitors worldwide focus on either fastest, largest stretch and some gourmet baking.

The gourmet aspect is already underway, with the Canadian Pizza magazine’s Pizza Chef of the Year competition (see page 26 for entry instructions).

Right now, the Canadian Pizza Team is seeking competitors in all categories. To qualify, you simply need to work in a Canadian pizzeria. The entry process is simple: videotape or photograph your fastest, largest stretch or acrobatic entry and send it to:
Canadian Pizza Team
PO Box 530, 105 Donly Drive South,
Simcoe, ON  N3Y 4N5

Competitors can also e-mail digital videos or photographs to pizza@annexweb.com. For a complete description of the categories and competition dough recipe, visit the World Pizza Champions’ website at www.worldpizzachampions.com.•