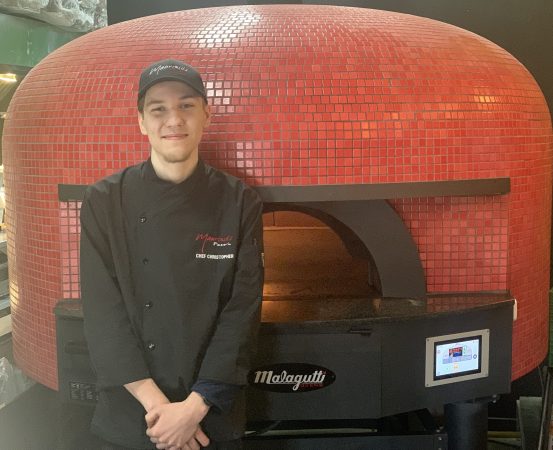 Parry Sound, Ont. – With so many pizzerias facing the challenge of finding and keeping good employees, we want to share how one person who started as a dishwasher at a Canadian pizzeria two years ago, has found mentorship, growth and a path to future success.

When 20-year-old Christopher Quinn went in for his yearly performance review in March at Maurizio’s Pizzeria Inc. in Parry Sound, Ont., he got a happy surprise.

Owner Maurizio Mascioli and manager and chef Sandra Porretta asked Quinn to design a pizza as part of his evaluation. Quinn came up with a plant-based pizza he calls “The Hippie.” After the restaurant closed, Quinn made the pizza and served it to the team.

After serving the pizza, Quinn was promoted to sous chef and received two new black chef jackets. He also received a ticket to the RC Show in May to help the team do research.

“I was very surprised,” Quinn told Canadian Pizza. “I’m still getting used to it. It was a blast to present my pizza to an award-winning chef. I was terrified to serve it,” he says with a laugh.

The Hippie featured a hummus base with zucchini, radish, asparagus and nutritional yeast.

“I made a few and they all ate it,” he reports.

“Christopher has excelled tenfold beyond all expectation,” Mascioli says. “I admire his ability to be an entrepreneur without being an entrepreneur. He thinks outside the box.”

He likes hiring students. “As long as you make the part-time job fun and educational and it motivates them, then you know your investment in training is not going to go to waste. I try to hire a new student every year. There’s a staff shortage everywhere and if I can protect that turnover, I will.”

“Young people, they’re like a sponge. They don’t have that attitude,” he says.

We asked Quinn what he likes best about his work. “I like all of it, honestly. If you’d have told me as a kid that I’d work at a pizzeria, I wouldn’t have believed it. I’m so thankful for chefs Sandra and Maurizio and for encouragement from my high school teacher, Blair Cousins.

“In high school I was ‘the kitchen kid,’ Quinn said. Cousins, his tourism and hospitality teacher, told him about an event at Maurizio’s where they needed volunteers. He suggested I drop off a resume too. So I did!”

Quinn counts among his skills customer service and kitchen support. He also took professional pizza course on dough taught by his boss.

“I can’t imagine working anywhere else,” he says.

“It’s not a skills-based thing. It’s more personality than anything. You can learn a lot. I knew practically nothing when I came here. I learned every day. You just have to keep an open mind in this industry. Not any idea is a bad idea – as long as you execute it well.”