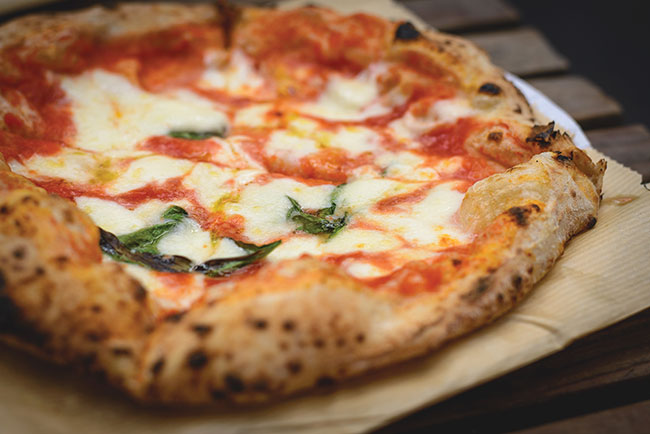 There was a time when pizza was predictable – Italian red sauce, cheese, pepperoni, and perhaps a few other toppings like mushrooms and peppers. Times have changed. Over the last few decades, the varieties of pizza have expanded greatly – new offerings created by talented, forward-thinking chefs, sure, but also, perhaps more importantly, traditional regional styles gaining greater exposure on the world stage.

Many chefs would argue Italian traditional is best. After all, there is a reason why pizza is considered a timeless favourite.

Neapolitan pizza
Neapolitan Pizza is the oldest and most traditional style of pizza. Flatbreads have existed in Italy since the days of the Roman Empire, but pizza as we know it today (dough topped with tomatoes and cheese) was invented in the 1700s. Naples, at the time, was exceedingly poor. The impoverished masses needed an inexpensive food that could be eaten quickly. Pizza – flatbread with toppings – fit the bill.

There are two types of Neapolitan pizza: Marinara and Margherita.

Tomatoes were brought to Europe in the 16th century by explorers returning from South America. A century later, poor peasants began to top their flatbread with them in the late 18th century. This was Marinara pizza, which received its name because it was traditionally prepared by “la marinara” (a seaman’s wife) for her husband when he returned from fishing trips in the Bay of Naples. But as it isn’t topped with cheese, Marinara is not truly considered a modern pizza.

That honour falls to Pizza Margherita. Baker Raffaele Esposito is generally credited with creating Margherita pizza. In 1889, King Umberto I and Queen Margherita visited Naples. Esposito baked them a pizza whose colours mirrored those of the Italian flag: red (tomatoes), white (mozzarella), and green (basil leaves). He named it in honour of his queen. This is what is now known as the classic Neapolitan pizza.

“The true Neapolitan Pizza must be soft, fragrant, easily foldable like a booklet. The cornice should be 1-2 cm thick, well-baked but not burned, with a total diameter not exceeding 35 cm,” explains Antonio Pace, president of Associazione Verace Pizza Napoletana (AVPN), an organization founded in 1984 to certify pizzerias that use the proper artisan traditions of authentic Neapolitan pizza.

Neapolitan pizzas are also cooked at very high temperatures (800 F to 900 F) for no more than 90 seconds.

Maintaining the heritage and standards of Neapolitan Pizza is the purview of AVPN. “We promote and protect, in Italy and around the world, the true Neapolitan pizza, produced and processed according to the ancient Neapolitan traditions and customs. For over thirty years we’ve been at the forefront in the defense of pizzerias, pizza makers and products in the supply chain linked to this great excellence of Italy’s gastronomic traditions.”

To receive AVPN certification, restaurants must officially apply and meet numerous requirements regarding ingredients and preparation, from leavening to seasoning to cooking. Currently, there are 920 AVPN-certified pizzerias in 50 nations.

“Neapolitan pizza remains popular because of its simplicity,” Pace says. “The Neapolitan Pizza was born as a poor product and the simplicity of flavours, scents and colours is considered the secret of its success worldwide. In 2017, UNESCO recognized the art of Neapolitan Pizzaiuolo as an intangible heritage of humanity.”

Sicilian pizza
Ultra-thick, square, topped with sauce and cheese – Sicilian pizza is as distinctive as it is flavourful. Sicilian pizza has two variations: the kind that originated in Sicily and the version that evolved in New York in the 20th century.

The original, traditional version hails from Palermo and is called sfincione, which translates as “thick sponge.” Sicilian pizza has a fluffy, spongy dough consisting of a mixture of flour, water, yeast and olive oil. The crust is topped with a meatless sauce made from tomatoes, onions sauteed in olive oil, chopped anchovies, oregano and crushed red pepper. It’s then covered with breadcrumbs and a grating of hard caciocavallo cheese.

The pizza is then baked in a square tray where the spongy dough soaks up the olive oil at the bottom of the pan and creates a crispy, charred bottom, while the middle remains spongy and soft.

Traditional sfincione does not use mozzarella because cows were a rarity in Sicily; most of the milk instead came from goats.

Evolving from focaccia, sfincione was traditionally served on holidays (Dec. 7, the eve of the Feast of the Immaculate Conception, Christmas Eve, New Year’s Eve, and Good Friday), but by the mid-19th century had become a year-round food item.

Sicilian-style pizza was brought to the United States by Sicilian immigrants, where it evolved once again. Most notably, mozzarella became a popular addition thanks to the availability of cow milk ¬– New York-style Pizza.

Roma pizza
The youngest of Italy’s regional pizza varieties, Roma pizza is less than half a century old, emerging in Rome in the 1960s. It eventually spread beyond Rome so that today it is the most popular style of pizza in Italy. And, as Rome is among the most visited tourist destinations in Italy, the popularity of Roma pizza quickly spread to North America as well.

Also known as pizza al taglio – which in Italian means “pizza by the slice” – Roma pizza is distinctive because of its signature crust.

“This isn’t a fast-food pizza. You take your time to make something special, great tasting and great for you, yet also simple,” explains Michele Casale, owner of Redi Pizza in Montreal, specializing in Roma pizza. “The dough is left to rest in the refrigerator for at least 72 hours to allow it to mature. Sitting longer burns sugar and proteins.”

By day 3, the dough will develop large air bubbles, which are the secret to the distinctive light and airy Roma-style pizza crust. It’s then laid out into distinctive square pans for preparation and baking.

Roma pizza can be topped with any garnish. “Because the dough is so delicious, an amazing foundation, you can top it with anything and it will still taste great,” Casale says. “The dough is also easy to digest and, because it can absorb a lot of water, you can warm it up the next day and it’s still soft and flavourful.”

The square pizza has traditionally been sold by the slice at streetside counters throughout Rome. But the distinctive soft, airy crust is not easy to cut using chef’s knives or traditional pizza cutters. Special pizza scizzas – unique scissors with a curved blade – are used instead. These scizzas slice the pizza from above which prevents the dough from compressing while also keeping toppings in place.