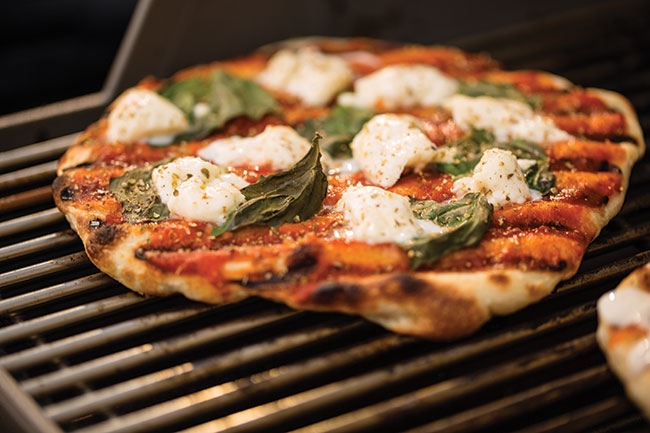 Chef Michael Clive advises cooks to trust the timer and let the smoking and grilling happen at the same time. “It’s all about keeping the lid down.” Photo courtesy the Weber Grill Academy

Food smoking is an artful way to add flavour and it’s not just for protein anymore. Learn how your pizzeria can tap into this hot trend.

Every trend list promoting the big culinary shifts for 2017 lists smoked foods as big news. Though the smoking of foods has existed since prehistoric times as a method of food preservation, it’s becoming an artful way of adding flavour and it’s not just for protein anymore.

Smoked delicacies popping up on menus include vegetables, sauces and even desserts.  Embracing the art of smoking requires something akin to the deft hand of a winemaker using different barrel-aging techniques to impart notes to a wine.

The underlying reasons for this trend seems to be prehistoric conditioning colliding with beverage alcohol trends that rely on wood notes to add depth to the taste profile. We are hardwired to be attracted to those foods that are safe, and because smoking has been used to preserve proteins for thousands of years, we associate a smoky note with “safe to eat.” The smell of the smoke while food is cooking is the prelude to a tasty meal so we’ve also been conditioned like Pavlov’s dogs to read the signal (all puns intended) as a cue for good things to come. As barrel-aged wines and spirits become more and more popular, it’s natural to see the use of wood to flavour foods intensify.

The sensory experience around smoky flavour is a bit different from other “tastes.” Smoke is detected primarily through the sense of smell with some taste produced by the Maillard reaction, which occurs when heat on a dry surface degrades sugars and amino acids. Sweetness and bitterness are the primary tastes produced. Wood-smoke smells are also associated with fond childhood memories of campfires and vacations. It’s the total package in terms of emotional connection to food.

Chef and about-to-be grill master Michael P. Clive of the Weber Grill Academy in Vaughan, Ont., agrees that fiery notes may be hardwired into our brains. “Grilling foods over wood is the most primitive way to cook,” Clive says. “Maybe it’s in our DNA?” The academy offers workshops and classes for the public so Clive has his finger on the pulse of the consumer mindset around grilled and smoked foods. “Younger consumers are being educated earlier than were previous generations. The millennials have access to lots of media around smoked foods and become accustomed to the wood flavours through wine and scotch consumption,” he says. Though he agrees that grilling and smoking foods has traditionally had a large foothold with male consumers, he now sees more women excited about grilling and smoking foods at the academy than ever before.

Grilling and smoking are two different techniques. Grilling uses high heat quickly to sear a crust on the outside of the meat to seal in moisture and juices. Smoking (also known as barbecue) abides by the mantra “slow and low.” By not creating a crust, or barrier, to keep out the flavours, the smoke permeates the food and creates a depth of flavour.

“It’s all about keeping the lid down,” Clive counsels. He advises cooks to trust the timer and let the smoking and grilling happen at the same time. “Depending on the woods used, there can be a great continuation of flavours between the food, the wood and the beverage. Pork ribs with apple wood play nicely together, smoked duck with cherry wood is lovely, pecan wood with fish brings out a nutty flavour. Of course, maple wood with bacon is classic,” he says. Add a craft beer or a barrel-aged whisky or wine and it’s a glorious trifecta of flavour.

If you’re looking for ways to tap into this trend on your menu, the possibilities are rich.  The obvious option would be to reach for smoked meats as pizza toppings, but let’s look at other ways to play with fire.

“We love to show workshop participants how to grill pizza dough,” Clive says. “I tell them to ‘commit to the flip.’ We start by placing the dough on parchment and painting it – like Bob Ross – with liberal amounts of olive oil. Carry the dough to the grill and flip it onto the grill in one move and then peel away the parchment. After just a few minutes, the dough is flipped back over and there are lovely grill marks on the dough.”

In addition to obvious toppings like bacon or other meats, vegetables are now being smoked. The chef suggests grilled and smoked tomatoes and onions as a nice way of introducing more flavour. Roasted and smoked peppers are lovely too. “Go easy on how many smoked toppings you use,” he says. “They sing on their own so look at the entire recipe and pick one topping to showcase.”

Cheeses lend themselves beautifully to smoking. A smoked mozzarella on top of a pulled pork pizza would pair beautifully with a craft beer or barrel-fermented chardonnay. The method of smoking cheese is different. It’s a cold process (under 90 F to prevent melting) carried out over a few hours. Aged cheddar with apple wood, gouda and provolone all lend themselves well to smoky notes.

For a real show-stopper, make the dessert smoked. Clive features a smoked peach cobbler on his workshop roster. “Pineapple, bananas and peaches are just a few of the fruits that lend themselves to smoking nicely,” he says.

And here’s an idea that’s just waiting for some pizzeria operator to develop: Chef Clive believes the theatre around the smoking process should be front and centre for the customer to see. It’s a form of “eatertainment” that adds to the romance of the process. Beautiful glass cloches could trap the smoke to be removed with a flourish to reveal the food transformed.

Smoking foods may be the most ancient of preparation methods, but it’s a process whose time has come to shine on menus and to generate sales. Perhaps the philosophy and the preparation method are one and the same: slow and steady wins the race.

Michelle Brisebois is a marketing professional with experience in the food, pharmaceutical and financial services industries. She specializes in brand strategies.
Print this page