Pizza Pizza is rolling out a new menu item featuring
four oven-toasted baguette selections in a move to increase its slice
of the growing Canadian sandwich market. 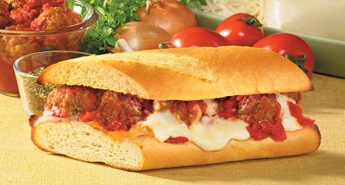 Pizza Pizza is rolling out a new menu item featuring four oven-toasted baguette selections in a move to increase its slice of the growing Canadian sandwich market.

The Ontario-based chain launched its new product line in early May with the introduction of toasted baguettes in Meatball Melt, Assorted Italian Deli, Mesquite BBQ Chicken and Mediterranean Veggie.

“We’ve been working on the product for close to a year,” said Pat Finelli, vice-president of marketing for Pizza Pizza.
“We’re starting off with four oven-toasted offerings and we’ll eventually be adding more to the menu.”

While Pizza Pizza has set no specific sales target, the company believes the introduction of its oven-toasted product will be a hit with customers. This would be consistent with the continued rise in the Canadian sandwich-sales business, a surge attributable to the healthy-eating trend among consumers.

Finelli said Pizza Pizza is applying its same successful format as it moves more aggressively into the sandwich-making market. The sandwiches will be prepared in the same ovens used to bake pizzas, and, according to Finelli, consumers can expect their in-restaurant orders to be ready “within four-to-five minutes.”

“This is the first time we’ve really promoted our sandwich line,” added Finelli. “Some of our competitors have done quite well with their oven-toasted sandwich menu. We believe this is a good opportunity to tap into a growing market and, at the same time, provide our customers with added menu variety.”

The oven-toasted baguettes, which will be available at Pizza Pizza’s 341 traditional locations, are priced at $4.99 each and, as part of the introductory promotion, customers will receive a free 355-ml. can of Pepsi with the chance to win a video iPod.�