Operators hit the Canadian Pizza Show floor this fall to make connections, be inspired and just plain have fun 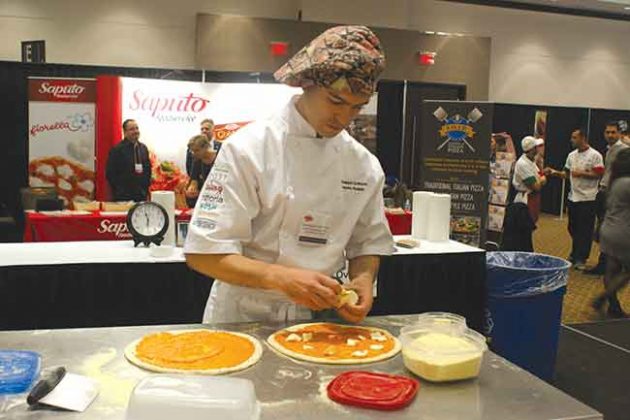 Giuseppe Cortinovis’ vegetarian pie featuring Einkorn flour and fresh figs earned him the runner-up status in the Chef of the Year Open division.

Canadian Pizza magazine’s annual pizza party, held Oct. 19 at the International Centre in Mississauga, Ont., provided a trifecta of attractions: a trade show tailored to the pizza industry, an educational program aimed squarely at helping operators thrive and a competition stage that delivered on excitement.

Attendees perused the aisles for products and services to help them run their pizza businesses more efficiently and brainstormed with exhibitors about how to tackle issues they encounter.

INTANGIBLES CAN BOLSTER YOUR BOTTOM LINE
Operators looking for further inspiration participated in several lively seminars that highlighted strategies – some of them based on intangible things like customer service – for boosting your bottom line. “Big Dave” Ostrander, a consultant known by many as “The Pizza Doctor” and a popular speaker at Pizza Expo in Las Vegas, opened the day’s session by giving operators some friendly straight talk about managing their pizza costs.

Ostrander urged pizzeria operators to make getting a handle on food costs a priority. He encouraged them to get an accurate digital scale and to stop free-throwing their cheese.

He encouraged them to “be a portion-control fanatic.” Cheese portion-control cups, spoodles or portioning spoons and accurate scales are essential tools to help you do this, he said, as he demonstrated portioning methods. Pizzas should be portioned by the square inch, not by their diameter, so you need to know how many square inches each pizza measures. For example, one 10-inch pizza is 78.5 square inches, he said.

Because a 14-inch pizza is 154 square inches and the 10-inch pizzas together are 157 square inches, the amount of cheese used for each order option is almost identical, he said, noting that most customers will go for 10-inch pizzas because that sounds like a better deal.

As for determining pricing, Ostrander had this simple advice: “If you don’t know your costs, you can’t control them,” he said. “Cost your menu. Build every pizza on the scale. You may find the results shocking.”

You can sell your pizza at more or less than 10 per cent and you should plan for that, he recommended.

The new purchasing model is all about partnering, Ostrander said. “The best relationships are built on trust,” he said, recommending operators ask themselves how they can reduce their distributor’s service load – what it costs them to service your restaurant – pay your supplier on time and never lie.

Giorgio Taverniti, who owns and operates Frank’s Pizza House in Toronto, shared how social media marketing strategies – and the control they put in the hands of business operators – have worked for him.

“Now we can compete with the big guys,” Taverniti said. “No chain of command is needed.”

A strong presence on social media is something you have to have, Taverniti said.

He said he spends serious time – two hours in the morning, two to three hours at night – posting and responding to online posts, but it yields him tons of feedback.

Taverniti described some impressive results. He has seen the business grow by 20 per cent since focusing on social media platforms like Facebook and Twitter to promote the brand. Frank’s Pizza House has 3,800 followers, but what’s important is the content he shares – from pictures of his pizzas to questions about customers’ preferences. He has almost eliminated his advertising budget since changing his marketing focus to social media. The pizzeria is so busy staff are obliged to turn away some orders on Fridays and Saturdays. Last August they closed for vacation for the entire month – tangible proof the strategy is working for them.

Avoid “sales-y” talk, Taverniti told the audience, adding that pictures of pizza get the best response from followers. Testing the waters online before adding new products to your regular menu also can pay off, he added.

Making good customer service a priority is another strategy that yields returns, said Jeff Dover, a foodservice consultant and principal with fsSTRATEGY.

The emphasis on excellence in customer service must come from the top down and be fully supported, Dover said. Treating customers well has a positive impact on guests, employees and makes financial sense, he said.

It makes sense to keep the customers you have happy, because it costs five times as much to get a new customer as it does to keep an old one, he said.

Choosing to give your business to someone is an emotional decision, he said, and the best employees are those who are good with people and personalize their service.

Dover encouraged operators to hire for personality and to give someone a chance if you think they will engage people. “You can teach cash register; you can’t teach nice,” he said.

The Red Lobster chain, which has come up from the United States to have great success in Canada, provides a good example of strong customer service: they have a staff member stand at the door on rainy days and walk people to and from the restaurant under their umbrella. This makes a great impression and can be adapted to other weather conditions such as providing scrapers and snow brushes in the winter.

What does good customer service mean to your restaurant? A person who visits a restaurant twice a month is worth $5,000 over 10 years – $75,000 to $150,000 if you include potential recommendations that customer may make to friends and family.

He encouraged operators to create a unique experience for customers. “Remember, you are selling “wow,” he said.

Marketing is another of those intangible things that can drastically affect a pizzeria’s bottom line. In a lively afternoon panel discussion, Ostrander, Taverniti and Marina Rondinelli talked frankly about what strategies have and haven’t worked.

Rondinelli, the former owner of Rondo’s Pizza Plus in Bright’s Grove, Ont., who now consults for the industry, favoured using branded items such as reusable pizza bags and lifters to keep your name top of mind. She said she had success developing a gourmet egg pizza and asking the Egg Farmers of Canada to promote it.

Taverniti touted the benefits of spending time on social media. “Use Snapchat,” Taverniti said. “And talk to your kids! They know what’s happening online.”

Ostrander recommended performing a “Yellow Page-ectomy” to market to your competitors’ existing customers.

In tight times, Rondinelli suggested scaling back on – but not eliminating – team sponsorships: “Maybe you don’t replace team shirts every year but you offer to buy new balls or bats,” she said. She urged operators to “keep your name out there.” Ostrander suggested doing “good old-fashioned marketing” by getting out and talking to people. When money is tight, it’s wise to put extra effort into your marketing, he said, adding that giveaway coupons for new customers can pay off. Taverniti said that in tight times he sends staff out to hand-deliver flyers.

When asked what she would do with a hypothetical unlimited advertising budget, Rondinelli said, “I’d give my pizza away” on the premise that her product will speak for itself. Ostrander also advocated giveaways as having a big promotional impact and spreading invaluable word-of-mouth advertising. He passed around sample flyers his staff handed out telling customers their order was free to celebrate the pizzeria’s 20th anniversary. Taverniti said would use a windfall to increase his Facebook advertising budget and invest in Instagram ads. “People spend a lot of time on social media,” he said, so investing resources there makes sense.

Giuseppe Cortinovis’ vegetarian pie featuring Einkorn flour and fresh figs earned him the runner-up status in the Chef of the Year Open division.

HAVING FUN
Many hungry eyes were glued to centre stage as pizza makers from Vancouver, Edmonton, Calgary, Toronto, Windsor, London, Ottawa and Montreal showed off their pizza-making skills to turn out a bevy of innovative pies at the Chef of the Year competitions, which just last year merged with the trade show.

Joe Leroux of Amadio’s Pizza in Port Credit is Canadian Pizza magazine’s Chef of the Year. Leroux’s “Chi manga bene, viva bene” – which translates as “If you eat well, you live well” – earned him kudos as Canada’s top pizza maker, along with $1,000 and a trip to Las Vegas to compete in the International Pizza Challenge in March 2016.

Carlo Raillo of Buca Pizzeria + Vino in St. Albert, Alta., impressed judges with his Pumpkin Pie pizza – which featured a seasonal pumpkin puree in its crust – to emerge as the Champion of Champions. Raillo, who was Chef of the Year in the open category for the last two years, competed alongside former title-holders Dave Housman of Famoso Neapolitan Pizzeria in Edmonton and Rocco Agostino of Pizzeria Libretto in Toronto.

Winner of the Great Pizza Box Fold-off is Breanna Gray of Gabriel Pizza in Ottawa. Gray folded 10 boxes in 30.12 seconds in the mid-day showdown against Carlo Raillo.

The Canadian Pizza Show team extends a sincere thank-you to Saputo Foodservice (Diamond) and Moretti Forni distributed by Euro-Milan (Gold) for sponsoring the Chef of the Year competition.

We’d also like to hand out a big thank-you to show sponsors Saputo Foodservice (Diamond); PizzaMaster distributed by Alfa Food Service (Platinum) – who also provided an oven for use in the competition; Stanislaus (Gold); and Dairy Farmers of Canada (Gold).

Our sponsors, along with exhibitors, speakers, judges, chefs and pizzeria operators – some of whom came great distances and brought family – all played key roles in making this pizza party happen.

Let’s do it again next year!