A look at automation and innovation in ovens 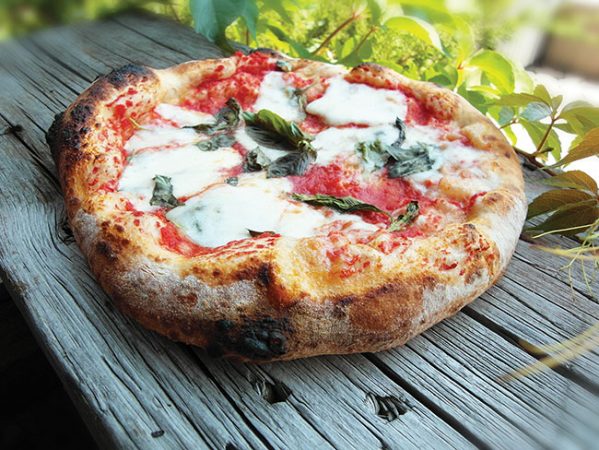 Operators have several factors to consider when choosing an oven: What type of pizza are you cooking? What level of skill can you expect from your employees? Is energy efficiency an important consideration for you? What volume of pizza do you want to produce?

To learn more about what operators are looking for in ovens, we consulted three oven suppliers who problem-solve with operators every day.

Automation is the future
Troy Mahoney, regional sales manager for Middleby Marshall, and company president Max Zakharenko pointed to automation as the future, and a potential solution to the staffing shortage.

“The pandemic taught pizza operators a ton about the need to move faster with delivery and takeout. Couple that with labour pressures that won’t be going away anytime soon and the need for automation is huge,” Mahoney said.

He’s been getting phone calls from operators who are busier than ever and can’t get anyone in to work. “Automation is going to get them over the hump,” he said.

“People are only willing to wait so long for a pizza,” Zakharenko said. “So with deck ovens, that’s 12 to 14 minutes. With conveyors that’s five to eight minutes. A lot of chains are having to push customers away, so automation is key – not only to keeping up with demand but to having the staff to operate your ovens.”

The company sells three lines of air-impingement conveyors – the traditional, their legacy ovens, and the “Wow!” line, and their latest development of the X-series of ovens on the 55- and 70-inch platform.

“The traditional is solid, bulletproof and has a lower price point to get into,” he said.

The Wow line of gas and electric conveyor impingement ovens has all the bells and whistles and different ways to move air in the oven. It is energy-efficient and usually a good return on investment, he added.

The X-series has just launched is combining the best of both worlds, simplifying the design while keeping the technology and performance of the Wow! and decreasing the footprint. “It’s the quietest oven we have developed yet,” Zakharenko said.

One feature he recommended adding is a hearth plate belt that holds heat like a stone. “If you’re looking for an extra pop on the bottom of the dough, it can be helpful and can replicate the deck oven product.”

Conveyors are suited and adaptable to all crusts, Mahoney said. Another option is split-belt technology to accommodate two different kinds of pizzas in the same space.

In addition to the impingement technology, Middleby Marshall offers operators the CTX long-range infra-red oven, which is geared to cooking raw protein,” Zakharenko said. “It can replicate charbroiling or cooking on a flat-top griddle.”

“We work a lot with operators that struggle with the current labour challenges, and the key is finding out what they want to accomplish and then fitting it to a platform they have,” he said.

“The Middleby Corporation as a whole is really focusing on the Internet of Things and connectivity,” Zakharenko said. “We acquired a company called Powerhouse Dynamics that connects back-of-house and the operator to let the operator know what each piece of equipment is doing. It tracks HVAC and utilities. If you’re a franchisee with 150 stores, you can open up their individualized dashboard and see all ovens remotely. Soon we will be able to show the life of an oven through sensors. If they can predict when certain components are about to be down, they can fix them before catastrophe happens.”

Demand for quality pizza driving oven innovation
Joe Di Donato, vice-president of operations for Faema Canada, agrees that automation is a solution to the staffing shortage. “You cannot find people to work,” he said. “One way you resolve that issue is to have machines to do the work. Machines are perfect, you’re not dealing with staffing and scheduling problems.”

It’s more money up front, he said, but there is a return on the investment.

Forni Ceky is a showpiece in the distributor’s showroom. It is a gas/electric and optional wood hybrid rotating floor oven with an electrical element underneath the rotating stone to help keep it very hot. In this way, it mimicks a wood-burning model and is less labour intensive.

Faema worked with pizzerias such as Pizzeria Libretto with five locations in Toronto in 2020 to update their ovens to stone deck ovens and adapt their Neapolitan pizza to become more portable.

Some pizzerias took the step of selling their pizzas at retail, Di Donato noted. “They cooked the pizza to 50 or 75 per cent, blast-chilled it and sold it to specialty stores for customers to enjoy pizza from their favourite pizzerias at home.”

Another client bought conveyor ovens and began selling their product in gourmet shops.

A relatively new oven, the electric Neapolis, is replicating what the Ceky wood-burning or gas ovens do but inside a smaller footprint, he said. It is less labour intensive and heats up to 510 degrees to cook a pizza in 90 seconds. “Some buy the Neapolis or a conveyor oven to accommodate different sizes of pizza, in the case of the nine-inch, allowing pizzas to cook side by side. It sits on casters and is a little easier to get into certain locations with limited space,” he said. 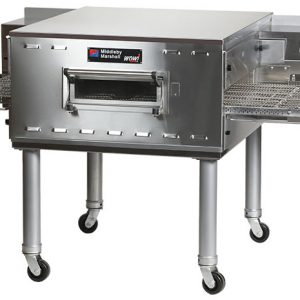 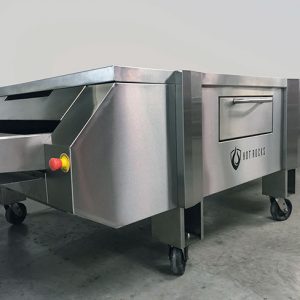 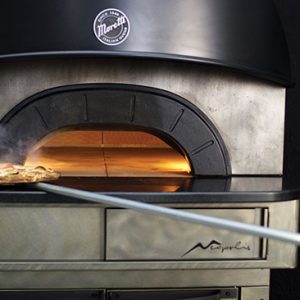 The electric Moretti-Forni Neapolis is replicating what the Ceky wood-burning or gas ovens do but inside a smaller footprint. Photo: FAEMA CANADA, FAEMACANADA.COM

The S-series deck ovens are energy-efficient and have bells and whistles such as timers on the ovens and boosters for peak times so you don’t lose heat. They can be set to automatically go into cleaning mode.

Deck ovens are a solid place to start because you can always add a second or third, Di Donato said. “Even stacked high you can roll it through a single doorway.”

He mentions yet another option – the Moretti ideck entry-level model with an economy model, which can be installed in locations that only have single phase power source and limited space. “It’s good for places where pizza is not the main offering,” he said.

Looking to the near future, Di Donato sees the biggest of the chains improving their quality to compete with independents and smaller chains, which he sees as more authentic. “Customers are becoming a little more quality oriented. I really believe that.”

Automation addressing labour shortage
Jessie Harding shared a few trends she and her team at Korok are seeing among pizza operators: a lack of skilled labour, the challenges of training new staff, interest in automated pizza lines, and sales of raw, parbaked and frozen pizza and pizza kits.

“I know some of our customers have had to shut down their sit-down restaurants, so they’ve compensated by selling the frozen pizzas by putting in freezers instead of chairs,” said Harding, who is marketing director for Korok, which manufactures the Hot Rocks stone conveyor pizza oven as well as a revolving tray oven, a pita oven and a rotisserie oven under the Picard Ovens brand. “They’ve also expanded into selling in the grocery stores.”

On the labour front: “Deck oven operators cannot always do it anymore,” she said. “It was taking a toll on people’s bodies. Some were basically ready to sell the business, but the Hot Rocks gave them more years to the business. You can put in a student that you’ve just hired baking the pizzas and they’ll be very successful.”

In the past, the conveyor oven has had a bad rap for quality, Harding said. “People who are used to working with a deck oven say they’ll never switch over because the quality will be off and they’ll never be able to replicate it. The artisanship is a concern and we obviously take that into consideration, but they are very surprised about the high quality the stone conveyor provides. It results in the stone-baked, crispy crust of a traditional stone oven.”

This oven is especially helpful for pizzerias with a large volume of pizzas, Harding said. It can turn out 80-100 pizzas per hour depending on pizza size and oven size.

“If you’re making 40-50 pizzas per night, it’s not worth the investment,” she suggested. “But if you have the demand, it’s worth considering investing in a larger oven that can handle the capacity.”

These days operators are aiming for efficient operations, she added, and helpful automated features include starting ovens automatically, using the Internet of Things for maintenance, measuring bake temperature, getting consistent browning and location of toppings, receiving fast service during breakdowns and having information available on energy consumption and operating cycles.

In future Harding said we likely we’ll see smaller ovens, smaller footprints and location rents going up. “People are used to ordering and eating at home, so footprints will be smaller,” she said. “Larger franchises are looking for information, so everything related to the IoT will eventually be applied to the oven.”

“I feel a very positive vibe from the industry,” Harding says. “A lot of people we’re talking to are looking to franchise their concept. There’s a lot of opportunity in pizza.” | CP