Pizza from Hell by Hell’s Kitchen was voted 2005’s Best
Pizza in Vancouver Magazine’s Readers’ Choice Awards. This victory,
achieved with thin-crust New York-style pizza, may not seem like a big
deal, but it is a formidable feat in Vancouver, a city that food
writers describe as an “ultra-competitive market.” 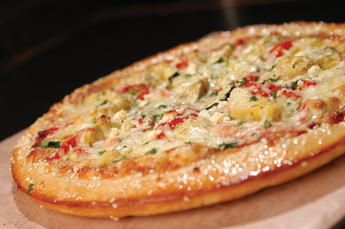 Pizza from Hell by Hell’s Kitchen was voted 2005’s Best Pizza in Vancouver Magazine’s Readers’ Choice Awards. This victory, achieved with thin-crust New York-style pizza, may not seem like a big deal, but it is a formidable feat in Vancouver, a city that food writers describe as an “ultra-competitive market.”

The 125-seat, 4,400 square-foot Hell’s Kitchen is competing against the city’s many casual restaurants and is doing so in the restaurant-packed, swanky Kitsilano neighbourhood.

So how does a three-and-a-half-year-old newcomer compete in this food-crazy city’s pizza market, and in a discerning neighbourhood? Glimpses of the secret – or rather, secrets – behind Hell’s Kitchen’s success become evident early in a discussion with James Iranzad, the general manager. At 29 years old, he is already a six-year veteran of the Vancouver restaurant scene. With business partner, Mark Durland, he operates three restaurants, all of which have different concepts. The seven-year-old Nevermind is a funky pub, Hell’s Kitchen is a casual party restaurant and their latest, Abigail’s Party, is a more upscale, bistro-type tapas bar that opened in November 2005.

All three are located in the Kitsilano neighbourhood, known for an upbeat, young-adult vibe. Shops selling babywear, yogawear, healthy food, books, home furnishings and casual fashions mix with small restaurants of every price range. The University of British Columbia students that used to populate Kitsilano and inspired its hippie reputation have grown up and settled there, and their children are starting to settle down here now, too.

The Kitsilano-raised Iranzad is clear about what Hell’s Kitchen is doing and why. He has the numbers, research and experience to back up their vision, and he knows what works and what doesn’t. But most important, he has a good feel for the neighbourhood and the customers he wishes to attract.

The Kitsilano crowd is by no means an easy target group. When Iranzad and Durland took over the lease of Hell’s Kitchen’s West 4th Avenue premises, they were the sixth restaurant starting in that space in five years.

“It is really what a lot of people would call a cursed location,” says Iranzad. “But we’ve always been interested in buildings with a little bit of character and we saw the potential.”

“Pizza is a communal food, you want to be able to focus on your party and your food.”

The space is on three levels and is flexible so that it can be divided for different sizes of groups, which is good because large parties at restaurants are in vogue in Kitsilano.

“We put a lot of thought into what this neighbourhood wanted,” says Iranzad. “We wanted to create a place where the 25-to-45 demographic could go to enjoy good food in a casual environment that did not bore you to death.  You get the energy of going downtown without having to put up with downtown.”

The names of the pair’s restaurants are all memorable and fun. Hell’s Kitchen’s name relates to many things, but apparently to Durland’s hometown of New York. Hell’s Kitchen is a New York West Side neighbourhood formerly known for crime and corruption with its gang rivalries described famously in the West Side Story, but it is now hailed as “restaurant row,” complete with ethnic and funky eateries.

“The name is memorable and has an edge and swagger to it that we like,” he explains.

While pizza is not the only thing Hell’s Kitchen offers, it accounts for a healthy 35 to 40 per cent of all food sales, which puts it close to a quarter of total sales.

“This is huge, because this is Kitsilano so we sell a fair amount of liqueur plus we are open for brunch so a good chunk of our food sales is breakfast. So for pizza to have 20 to 25 per cent representation of our total sales is really saying something,” says Iranzad.

Hell’s Kitchen did not start with pizza on its menu.

“We got into pizza about a year and a half after opening,” says Iranzad. “Mark figured out that because the left side of the space was not used effectively we need to create a separate Pizza from Hell area there and open it into the street. Now we treat Pizza from Hell almost like a different entity.”

Take-out and delivery are now a large part of the pizza sales.

Getting the pizza just right took some time and effort.

“In our opinion, to have a successful restaurant in Vancouver – which is a very fickle culinary market – you have to offer people something that they really want, something that you are able to do really well,” says Iranzad. “So we thought about pizza a lot. We experimented and researched. And we bought the large stacked pizza ovens with stone interiors, which are perfect for cooking the thin-crust pizza. We’ve just started adding rosemary to our crust recently and it’s a great addition.

“We use generous portions and we pay for this quality,” says Iranzad. “We are not trying to be competitive with the discount pizzerias. We sell pizza for $3.25 per slice.”

Scott Petrie manages Pizza from Hell and the pizza kitchen in collaboration with chef Aurelia Berleri. Together they create pizzas that are fun and accessible to a wide range of demographic. The menu changes seasonally, but the top three stay. The T-Rex is the meatlover’s favourite with smoked bacon, pepperoni, seasoned ground beef and smoked chicken. The elegant Aphrodite is popular with ladies and features pesto, smoked chicken, sun-dried tomatoes, roasted almond and asiago. Also on the top-three list is the Penny Lane packed with grilled zucchini, spinach, grilled artichokes, roasted red peppers and feta.

And what about the future?

“More Hell’s Kitchens,” James Iranzad says without hesitation. “Hell’s Kitchen has great growth potential. It is a great concept that fits into pretty much any neighbourhood because it satisfies the needs of such a wide age demographic. It naturally appeals to the younger clientele and yet it is comfortable for people who just want a nice, quiet dinner. Ultimately, it is all about good food and good ambiance.”

Iranzad is not yet ready to reveal which Vancouver-area neighbourhoods will see the next Hell’s Kitchens, but it is clear that he will have done his homework about them.•