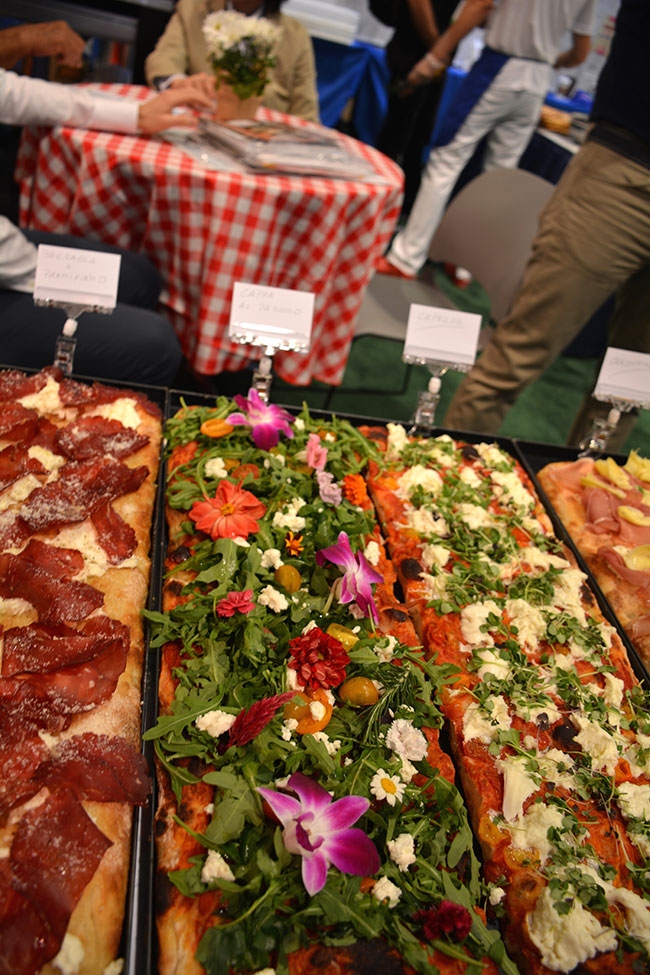 Polselli showcased its Super flour, developed for Roman pizza crusts, through a colourful, eye-catching display that included another type of edible flower.

If you’re looking to gain an edge for your pizzeria, an industry event like the International Pizza Expo is a great place to start.

The Expo in Las Vegas is one such event that – like a seasoned pizzaiolo – every year delivers a winning recipe. Anytime you get knowledgeable suppliers, experienced pizzeria operators, new operators and staff, and industry experts in one place at one time, it just works. Throw in a heaping ladle of competition and you can’t fail to take home a morsel of inspiration.

This year was no exception as attendees shopped, bonded with others in the industry and took home new ideas and practical tips. As usual, Canadians were a visible presence on the show floor. Past Pizza with Purpose winner turned consultant Wayne Rempel of Lacombe, Alta., and buddy John Winterbottom of Papa Baldy’s Pizza in Red Deer, stopped by the Canadian Pizza booth to say hello. Rempel presented a marketing seminar and Winterbottom was enjoying walking the show floor in search of, among other things, specialized food containers. John Pizzo and Dean Litster of Windsor, Ont.’s Armando’s Pizzeria said they were enjoying the trade show booths and pointed out several pizza vending machines on display.

Canadian pizza chefs proved their diversity by competing in every category. Meghan O’Dea of Pi Gourmet Eatery in St. John’s, N.L., who tied for fifth place in our Canadian Chef of the Year competition, placed third in the international region of the Non-Traditional division and sixth overall. Chef of the Year Carlo Raillo of Vivo Ristorante in Edmonton represented Canada well in the Gluten-Free division and runnerup Rodolfo Santo of Gino’s Pizza & Spaghetti in Kingston, Ont., competed like a pro in the Traditional division – his first international competition.

Jason Seitanidis of Matador Steak and Pizza & Steakhouse in Calgary took his western-style pizza to the Pan division, Cristoforo Calabrese of N’ata Cosa Ristorante, St. Catharines, Ont., competed in the Napoletana division and Giuseppe Cortinovis of Hawksworth Group’s Nightingale in Vancouver – last year’s Chef of the Year runnerup – returned to compete in the Traditional.

Making the most of your oven
In the demo corner, pizza chefs from around the world satisfied attendees’ hunger for ideas. A whole roasted chicken and other tasty dishes flew in and out of a wood-fired oven as Tim Green shared his ideas for “Making the Most of Your Oven.” Green is a former in-house chef for Wood Stone and current expert at Synergy Restaurant Consultants. Before demonstrating ways to use your oven for more than pizza, he asked attendees to do a bit of business brainstorming: “If you’re looking to add items to your oven, ask yourself why your oven is not full of pizza.”

Green said he likes to roast vegetables both to add flavour and to reduce moisture. Roasting the veggies simplifies the process because it means you don’t need extra items such as spices to add flavour, he said. Also, it’s better than putting vegetables on a pizza raw and risking that they’ll remain partially raw. Tomatoes are good candidates for roasting and make great additions to pasta dishes. This kind of communal cooking creates what Green called “theatre” for your customers as they anticipate your dishes based on sight and smell.

Making the most of your ingredients
Away from the ovens and up in the classroom, Glenn Cybulski provided solutions to the industry-wide goals of reducing waste and keeping your menu fresh by sharing several “New Uses for Old Ingredients.” Cybulski, who operated three independent pizzerias before founding fast-casual franchise Persona Wood Fired Pizzeria in Santa Barbara, Calif., said that at some point every menu stops working. When that happens, he recommends a tough-love approach: “If it’s not selling, drop it.”

To shake up your menu, the veteran pizza operator suggested focusing on one ingredient to see what you can do with it. A helpful strategy is to offer new items with the change in seasons, for special events and on holidays, he said, citing Persona’s Thanksgiving and Dungeness crab pizzas (the latter available for one month only) as examples of this strategy. This creates anticipation, builds your brand and generates revenue.

Start by identifying your down time, which for many pizzerias is from 2 to 5 p.m. Everyone should be testing new recipes when things are slow, he said. Although it’s unwise to add an item to your menu before it is tested and gets a great response, you should freely experiment and consider targeting customers of a certain age group or geographic area as a test group.

Using ingredients you already have will help reduce food costs, Cybulski said, and appetizers are a relatively simple way to do that.

Even franchisees need to look for new ideas, he said, tossing out a few appetizer ideas to the audience. Bruschetta, which mainstream restaurants make for $1 and sell for $12, is a high-profit item. Mini-calzones drive both dessert and happy hour sales – dessert fillings include peanut butter, strawberry and nutella. You use a two-ounce dough ball and they take about three minutes to prepare – one minute to bake in a wood-fired oven. Other ideas include garlic knots and cheesy bread sticks made with leftover dough and pepperoni crisps. The crisps, served with a chipotle or ranch dipping sauce, go over well, he said, adding that 25 pepperoni slices baked for about 30 seconds should do the trick.

Cybulski also suggested making sauces and salad dressings from scratch, arguing the practice is cost-effective for most pizzerias. “If you make it from scratch, they will come,” he said.

In conclusion, he said there is no single answer for everyone: “The answer depends on your restaurant, your menu, your ingredients.”

Polselli showcased its Super flour, developed for Roman pizza crusts, through a colourful, eye-catching display that included another type of edible flower.

Choosing the right pos system
With so many suppliers of ingredients, tools, equipment, technology and services out there, choosing a point-of-sale system can be a daunting task. Dan Collier’s seminar made that task a little lighter by sharing his approach to choosing a POS system. In his former role as general manager of a Southern California pizza chain and his current role as owner and operator of PizzaMan Dan’s with eight locations, Collier has been through the “painful” process three times.

He suggested “embracing the pain” of choosing a new system and putting in time on the front end to ensure you get what you need.

Choosing a system is a personal, subjective decision, he said. The first step is always to talk to a system provider’s sales staff, but it’s important to go deeper and get answers to your questions from a technical expert. Use a checklist (such as the 100-item sample list he provided attendees), ask a lot of questions, choose your must-haves from that list and insist on having them.

A commonly cited problem is that many POS systems are not pizza-specific and therefore not equipped to handle the way pizza orders come in. One helpful feature that can save you a lot of money is “ideal inventory,” he said. Most systems have it but not every company representative knows how to train pizzeria staff to use it.

Because it takes a lot of work to input ideal inventory, 24-hour customer service goes hand in hand with its success. Systems go down at inconvenient moments and the technical experts you need are not usually found at the end of the phone line.

Collier invited volunteers from the audience to share what they want from a POS system and what their experience has been with their current system. One operator put ease of inputting and scalability for an expanding operation at the top of his list. He wanted the freedom to choose his own payment system without being tied to a provider who is partners with the POS company. Integration with existing computer programs such as accounting spreadsheets was important to another operator who didn’t want to constantly rekey data.

The bottom line? Identify your must-haves and insist on getting them.

On the equipment side, Dynamix was displaying its Italforni ovens and Hobart presented its HL662 60-quart mixer featuring 2.7-horsepower motor and heavy-duty variable frequency drive.

Look for briefs on these products at www.canadianpizzamag.com and in future new products pages.